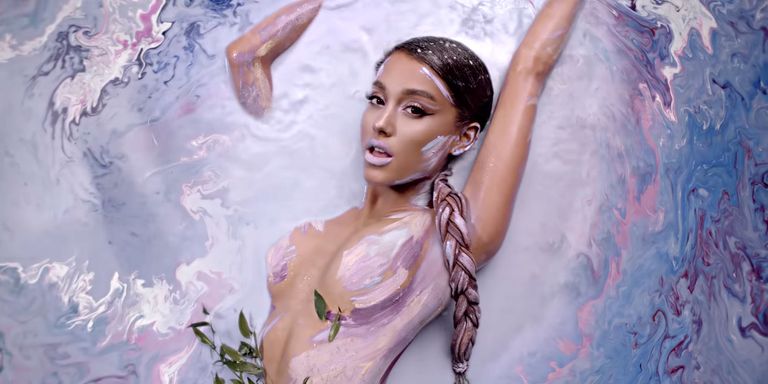 Last week, Ariana Grande released the music video for “God is a Woman” (you know, the video so mesmerizing that her fiancé Pete Davidson couldn’t look away?), but one of the most vivid scenes in it was when Ari was singing in magical-looking water with swirls of pinks, blues, and purples.

And if the vibrant, swirly water makes you think of a certain Lush product, you’re not the only one. Twitter user @grandeslite tweeted at Lush to ask if the company could make a bath bomb with the same color scheme and name it “God is a Woman.” Genius, right?!

Ariana then responded with this:

omg @lushcosmetics i’ll do anything

Just one day after her reply, Lush Product Inventor and Chief Digital Officer Jack Constantine, known as @lush_jack on Instagram, FREAKING MADE A PROTOTYPE. That guy is fast!!!

I had a fun day working on a prototype for @arianagrande of a #godisawoman #bathbomb in the #lushlabs today. Still needs work, version 2 tomorrow ??

I had a fun day working on a prototype for @arianagrande of a #godisawoman #bathbomb in the #lushlabs today. Still needs work, version 2 tomorrow ??

She commented on the video that she was freaking out and honestly SAME.

Just one day later, Constantine developed a second version in order to get the mix of colors just right. From the looks of it, he’s testing out a more vivid purple with specks of silver in it. So. GORGEOUS.

So here’s a shout-out to Twitter user @grandeslite for making this potential collab happen. Stay tuned for more details on this super exciting development, and hopefully, you too will be able to treat yourself with a mesmerizing bath like the goddess you are. In the meantime, I’ll just be blasting “God is a Woman” and shopping for similar bath bombs to hold me over.