Sadie Robertson Huff is getting Unfiltered about some of her most personal life experiences yet, and sharing the behind-the-scenes stories that didn’t make it to TV.

The 23-year-old reality star has spent a good portion of her life in the spotlight, starring on shows like Duck Dynasty and Dancing With the Stars. Now, she’s exclusively opening up to ET about how her biggest TV moments also served as her biggest life lessons.

Back in 2014, Sadie seemed ecstatic when she and her pro partner, Mark Ballas, took second place during the season 19 finale of Dancing With the Stars, finishing closely behind mirrorball champions Alfonso Ribeiro and Witney Carson. Cameras constantly captured the then-17-year-old smiling from ear-to-ear, and she exuded confidence every time she stepped foot into the ballroom.

Deep down, however, Sadie wasn’t feeling as glamorous once the dance competition show came to an end. She remembers feeling pressured to keep her fit DWTS figure in tact, especially after family, friends and fans on social media started making comments about her post-show body.

“During Dancing With the Stars, you work out so much and you’re dancing 24/7, so no wonder you have the body of your lifetime!” Sadie explains to ET. “I had this body that I never thought I’d have. I had a six-pack for two weeks, but then Thanksgiving hit and it went away. People started to comment.”

“They were such innocent comments at first, like, everything was great. But whenever my body started looking a little different, that’s when the struggle came in,” she continues. “There were people in my life, who were just really negative influences, that would say things that were not uplifting about the way that I looked and how I needed to maintain the body that I had. It was so wrong. I was insecure at the time, so I believed them and thought, ‘Oh, I need to push it.'” 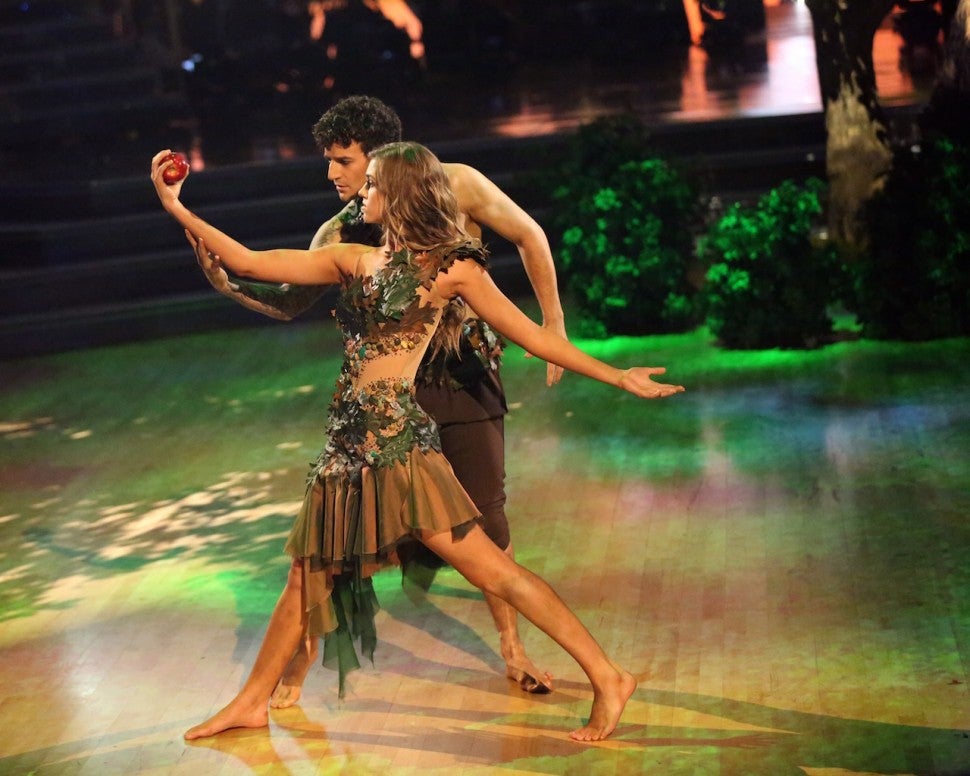 Around the same time she was competing on DWTS, Sadie was also into modeling, which certainly didn’t help her struggles with body image. “People would say things like, ‘Oh, if you lost 10 more pounds, you would look like a real model,'” she remembers. “I was literally 115 pounds and already unhealthy. That just messed my mind up.”

Sadie says it wasn’t long before she started developing “a really unhealthy view” of her body, adding that “an eating disorder is different in a lot of different ways.”

“You can’t stop thinking about your body, how you look, how you should eat. You’re counting the calories, you’re sizing up your legs and all those different things. You’re just kind of completely gripped by it and that’s kind of where I was,” she recalls. “I would look at myself in the mirror and I would think, ‘I’m fat,’ and I was not at all.”

“You don’t realize [at the time] that the things you’re struggling with, you think it’s just about you, but actually it affects a lot of other people around you,” she adds. “I pretty much just took the word as it was from the Bible. It talks about how you’re beautifully and wonderfully created.”

Sadie tells ET that her faith in God is what helped her get through those difficult times, teaching her how to love herself, from the inside out.

“I started praising God and thanking him for the way that I looked, instead of looking in the mirror and saying, ‘Ugh, I wish my arms were thinner, I wish my legs were more toned, I wish I had her eyebrows’ … whatever it was that I would tell myself,” she shares. “Instead I would tell myself, ‘I am so thankful that I have this. I’m so thankful that my legs actually serve the purpose that they should and that they’re able to run, that my arms are able to carry things. That my stomach one day, hopefully, will be able to carry a baby.’ Just what we’re actually designed and created for.”

“It definitely made me stop thinking about myself as much,” she adds. “It allowed me to be able to think of others, and how I can serve them with the body I’ve been given.” 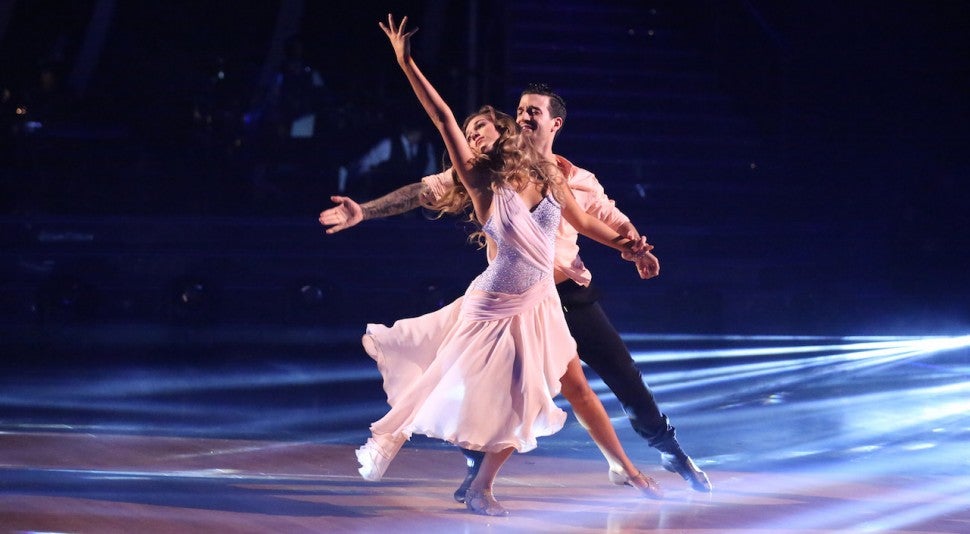 After Dancing With the Stars, Sadie also remembers not really knowing “what to do” with her life from there. She says she again looked to God for guidance.

“I was in this place where my life dramatically changed so much. I went from living in Louisiana to now being on Dancing With the Stars in Hollywood with 20 million people watching every week with the spotlight just literally being on me,” she recalls. “There’s a million beautiful things that come with that … but a lot of other things come from that too. For me, I started struggling with a lot of insecurity of who I was because of a lot of people telling me who I am and not really feeling like that was me.”

“I remember thinking these thoughts, like, ‘I don’t know how to be that famous girl that everybody loves and follows on Instagram,'” she adds. “I remember praying and saying, ‘God, I think you chose the wrong person. This makes me nervous. This makes me insecure. This is not something I’m thriving in.'”

Sadie says it was in that moment that she realized her faith was going to be “everything” to her moving forward. It’s what pushed her to create her Live Original ministry which aims to build unity through community.

“All of a sudden I was so empowered to do everything that I’m doing now,” she adds. “That’s just my story, but man, that’s why my faith is so important to me.” 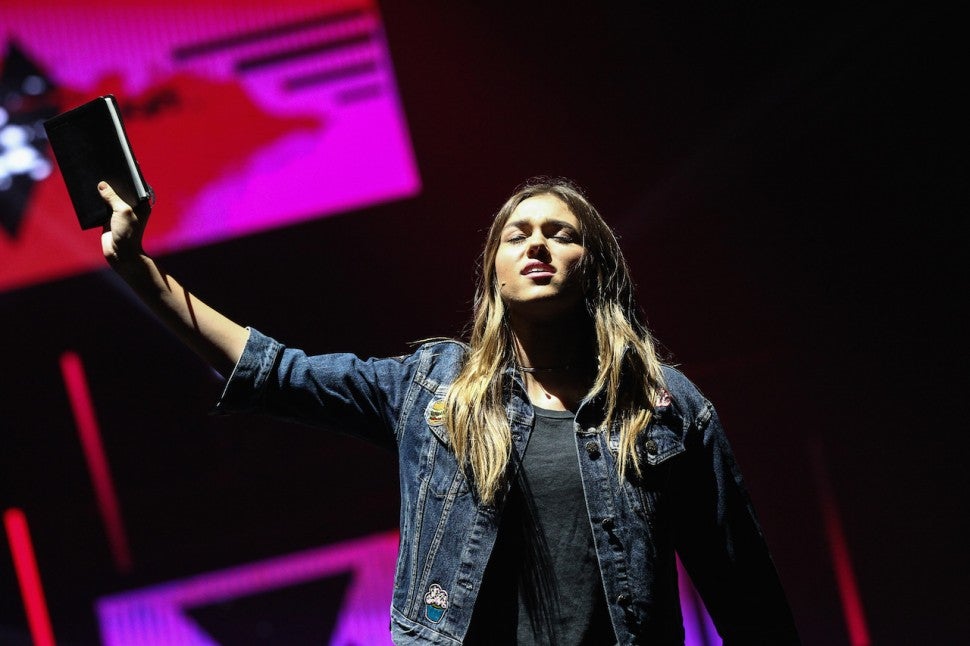 Throughout her Unfiltered episode (which you can watch at the player up top), Sadie also opened up about how the Sadie you meet in real life is much different than the one portrayed on television. She admits she was “a little nervous” while filming the early seasons of Duck Dynasty back in the day.

“In real life I am, like, straight-up goofball. I remember the first episode I watched I was so embarrassed. Like, ‘My voice is so country,'” she jokes. “I also used to struggle with anxiety so much … it wasn’t really until I called it fear that I really tried to fix the problem.”

“I say that because I think a lot of times we can fall in the excuse of, ‘Oh, I’m just an anxious person’ … but for me, I knew it was beyond that. It was fear gripping my life,” she continues. “You know it’s a problem whenever you run off of an airplane, like, make the pilot stop, and say, ‘I have to get off the plane because I believe this plane is gonna crash.’ Like, fear begins to drive your life.”

Sadie, who has been married to Christian Huff since 2019, also reflected on her past dating life. She says that looking back now, she wishes she “spoke up to guys who just didn’t treat me right.”

“I wish I spoke up to the guy who was constantly talking about the way that my body looked and could be better,” she admits. “If I would have just spoken up for myself, or just stood up for myself, that would have saved me a lot of hurt.”

“However, you do grow from those things,” she adds. “Now that I’m married to Christian, who is just the most affirming and encouraging person ever, [I realized] finding your voice in those times will save you from a long couple of nights of crying.”

went to the top for a view I had at the bottom ?❤️?? AYO still giddy over you … always gonna be, so get used to it 🙂

went to the top for a view I had at the bottom ?❤️?? AYO still giddy over you … always gonna be, so get used to it 🙂

Overall, Sadie has learned a lot about herself (along with life, beauty, boys and more!) over the past few years, and couldn’t be more grateful to have a platform where she can share her positive lessons with others.

“Beauty has evolved for me in a couple different ways in my life. I think just the maturity of how I see beauty has grown a lot,” she explains. “I think a lot of times we say we want inner beauty but we seek to strive for outer beauty. What really helped me is understanding that it’s not actually about being the most beautiful person in the world; it’s about the beauty that radiates inside of you and off of you and how that can actually captivate the attention of somebody who loves you.”