Teyana Taylor Just Showed Off Her Abs At The VMAs, And Damn 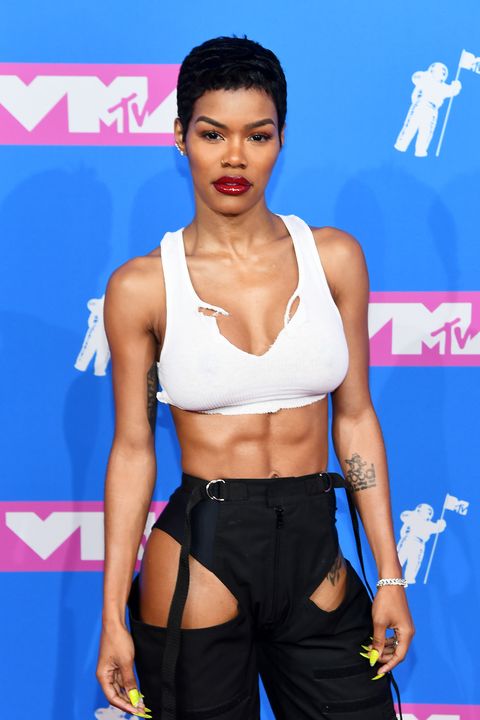 Teyana Taylor just arrived at the 2018 MTV Video Music Awards, and OMG did you see her abs?

Of course you did—Taylor’s rock hard six-pack was kind of hard to miss in a torn white tank made to show off her hard work at the gym. And, yeah, viewers were quick to take notice as she walked the VMA red carpet.

Twitter user Cary Lang wrote what we were all thinking when we saw Taylor strike a pose: “*vows to start going to the gym again tomorrow*”

*vows to start going to the gym again tomorrow* https://t.co/UiGQA7uzBp

Then there was @Nessa_LO, who said Teyana’s abs made her want to nix food altogether (which, P.S., allow us to recommend an abs-friendly diet instead):

Every time I see Teyana Taylor’s abs I hate food.

Teyana also wore high-waisted black pants with side cutouts that revealed what appeared to be a pretty toned derrière:

So what is Teyana doing to look that fit? Apparently, a killer dance-cardio program. “I have a dance fitness program called Fade2Fit, where we do live videos of us dancing,” she told The Cut. “We combine dancing and exercise to make it fun and release pressure.”

The singer also told The Cut that you can see results in as little as a week. “I do it every day, and I have to choreograph it every day,” she said. “I haven’t had any complaints yet, so I’m happy about that.”

Teyana likes to steer clear of too much strength training because she says it doesn’t work as well for her body.

“If I lift up a weight, I automatically get super strong,” she says. “That’s why I get intimidated and stay away from the gym—I’m already naturally so strong that if I were to work out I would look like a bodybuilder.”

That routine, combined with veggie smoothies (Teyana says she still has trouble getting down whole vegetables) is apparently behind that chiseled six-pack.

If you’re inspired to make tomorrow an abs day but aren’t much of a dance cardio person, we can help! Check these out the 15 best abs exercises of all time and these yoga moves for great abs, and get ready to channel your inner Teyana.