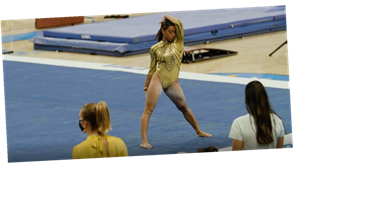 The UCLA women’s gymnastics team is filled with soooo many talented ladies, and they keep delivering the hypest floor routines. Last month, gymnast Nia Dennis did an incredible floor routine that celebrated Black excellence, and another routine last year to some of Beyoncé’s greatest hits.

And now, her teammate Margzetta Frazier has delivered another iconic floor routine set to Janet Jackson’s music that she premiered at UCLA’s meet against BYU on February 10. UCLA Gymnastics posted the routine on its Instagram account, and it has totally gone viral.

The video was also posted in full on YouTube.

Margzetta included choreo in her routine from Janet’s Jackson’s music videos for “Nasty” and “If”, and it earned her an impressive score of 9.925.

And the internet is completely obsessed.

“She killed it!!!🔥🔥🔥🔥” one person commented, and another wrote, “Heck yeah! Perfect pairing of Janet & Margzetta – two absolute queens.”

After the meet, Margzetta (and Nia) gave a recap of the meet for UCLA Gymnastics. And Margzetta talked more about how she felt about her performance.

“I did a new floor routine. I did Miss Janet Jackson. I did a medley. I hope you like it girl, if you see it. I love you a lot! You’re my inspiration in life. So floor was great,” she says.

And Janet Jackson herself returned the love, by posting the routine on her own Instagram. She wrote, “#iLuvIT @margzetta!!!! 🖤🖤🖤

FYI, Margzetta is a junior on the UCLA team, so there’s still more epic performances to come. Her favorite event is actually the uneven bars, according to her UCLA bio. She is a two-time All-American on the uneven bars.