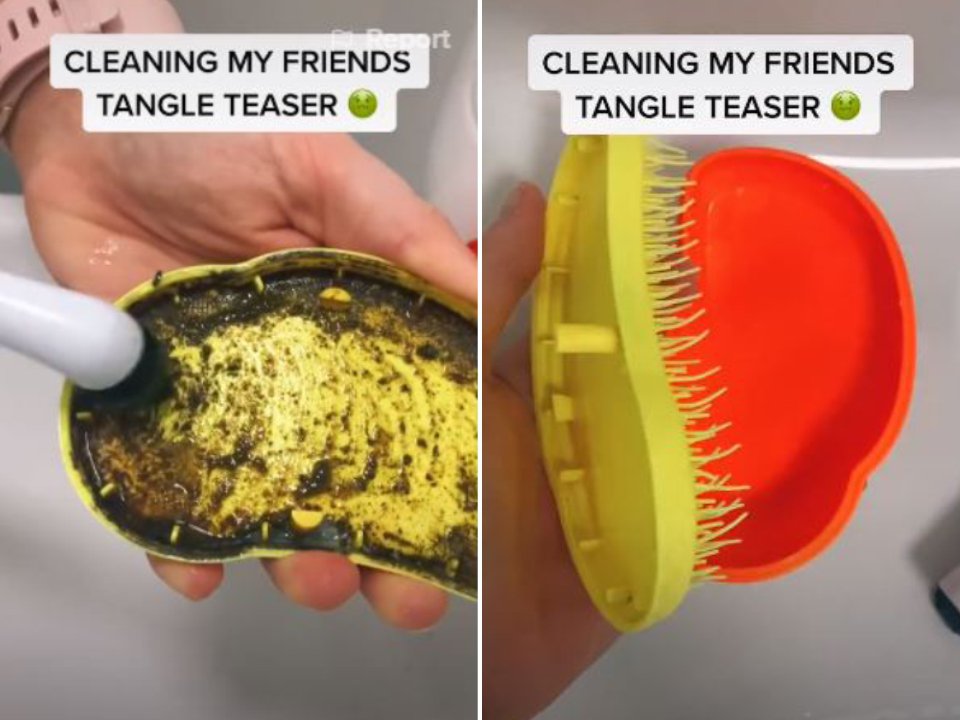 A woman has shared a video of her cleaning a friend’s Tangle Teezer and showing a grim amount of mould build-up on the inside.

Chloe, a student nurse who posts under the username cleanitwithchlo, shared a clip of herself scrubbing a friend’s Tangle Teezer from the inside out.

Armed with a Sonic Scrubber and a bottle of mould remover spray, first she removes hair from the brush.

Then she sprays the bristled side of the Tangle Teezer with the spray and runs it under the tap.

Her next step is cleaning the outside of the brush with the scrubber with the tap still running.

Once the outside is clean, she opens the Tangle Teezer up to reveal a horrifying build-up of black mould festering on the inside.

To get rid of the mould, she sprays the inside with the mould remover, runs both pieces under the tap and scrubs until the mould is gone.

In the video, Chloe says: ‘This is a public service announcement for anyone who owns a Tangle Teezer hairbrush.

‘So guys, I don’t know if you know, but you can actually open these up and clean inside them. I would really recommend doing it.

‘Today, this was my friend’s Tangle Teezer. She’s been using it in the shower for three years and has never cleaned inside it.

‘So as you can see it was absolutely full of black mould, so I’ve used some mould remover spray and a little brush just to remove it all

‘Guys if you’ve got one of these at home then please open it up and have a look. You’ll be so shocked.’

In the comments, when people asked how she manages to pry the Teezer open, Chloe said she used a bobby pin for some leverage.

The clip has earned 80,000 likes since it was posted just two days ago, with other commenters sharing their shock and fear at having never opened their own Tangle Teezers.

One person wrote: ‘I’ve had mine for five years and never cleaned it! Imma go clean it now.’ [sic]

Others said they’ve been popping theirs open to store things like hair ties inside.