Emily In Paris made its debut on Netflix only a week ago, and yet it’s already made a huge splash with fans around the world. Whether fans are debating the realism of the series or fawning over its designer fashion, audiences can’t seem to stop talking about Emily in Paris. If you’re among the fans who can’t get enough, these 17 Emily in Paris behind-the-scenes facts that’ll satiate you until get the chance to re-watch it.

Warning: Light spoilers for Season 1 of Emily in Paris follow. In Emily in Paris, an American millennial tries (Lily Collins) to make her way in Paris while navigating her social media career, lots of romances, and whole lot of cultural differences. The series is brought to life by Darren Star, who’s also the man behind rom-com series like Sex and the City and Younger. Emily in Paris fits right in with Star’s past work when it comes to frivolous fun. But even still, fans have a lot to say about about how silly the show can be, and French critics have taken issue with how the show represents Parisian culture. Whether you love it or hate it, though, there is undeniably something fascinating about Emily in Paris, and these behind-the-scenes facts will give you more to explore.

The Entire Series Was Shot On Location The series was filmed entirely in Paris, France and the nearby Loire Valley. All the famous landmarks featured in the show are the real deal.

Some of the Cast Lived Together While Filming

According to Cosmopolitan, Lucas Bravo (Gabriel), Ashley Park (Mindy), and Samuel Arnold (Julien) all moved in together during production.

Darren Star Was Inspired By His Own Experience In Paris

Star explained, "I’ve wanted to do a show about an expatriate living in Paris for quite some time. When I was 19 I did the whole backpack tour of Europe for the summer, landed in Paris, and fell in love with the city. And I thought it would be great to share that feeling with an audience and create a show that would explore the overall experience of what it’s like to be an American abroad.

The most time Collins had spent in Paris before filming was two weeks, whil Park had never been there at all before. The two embraced exploring the City of Lights together. 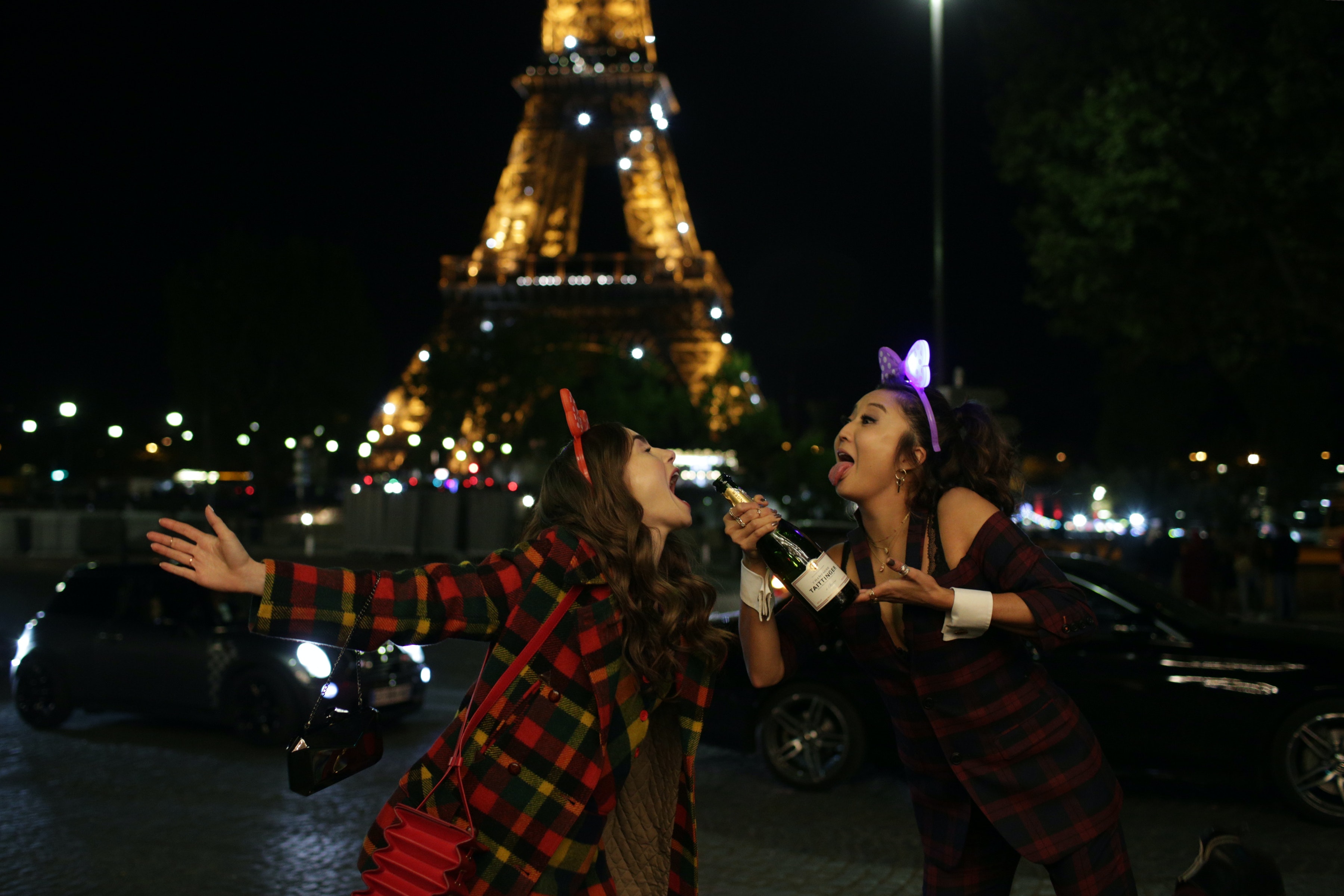 Star loved the simplicity of the name Emily, but he also believes he subconsciously was making a nod to the 2001 film Amélie. Mindy is in honor of Star’s dear friend who guided him through Paris, similar to the way Mindy guides Emily in the show.

Mindy Only Sings Because Ashley Park Plays Her

Park received a Tony Award nomination for her role in Mean Girls on Broadway, so after she was cast, Star asked her if she’d be into the idea of having Mindy sing.

Emily Is A Fan of ‘Sex and the City’

When thinking about Emily’s backstory, Collins decided that Emily probably grew up watching Sex and the City and takes a lot of inspiration from Carrie Bradshaw (Sarah Jessica Parker).

Emily’s Jewelry Is a Nod to Carrie Bradshaw

Emily wears hoop earrings with her name in them, which is a sly homage to the nameplate necklace Carrie wears throughout Sex and the City. Since Sex and the City and Emily in Paris share a costume designer in Patricia Field, it makes sense that there’s some crossover between the series.

…So Are Her Costumes

Field also gave Emily a tulle skirt for her first big work event in episode 102. That’s a little nod to the tulle skirt Carrie wears in Paris in the Sex and the City series finale. 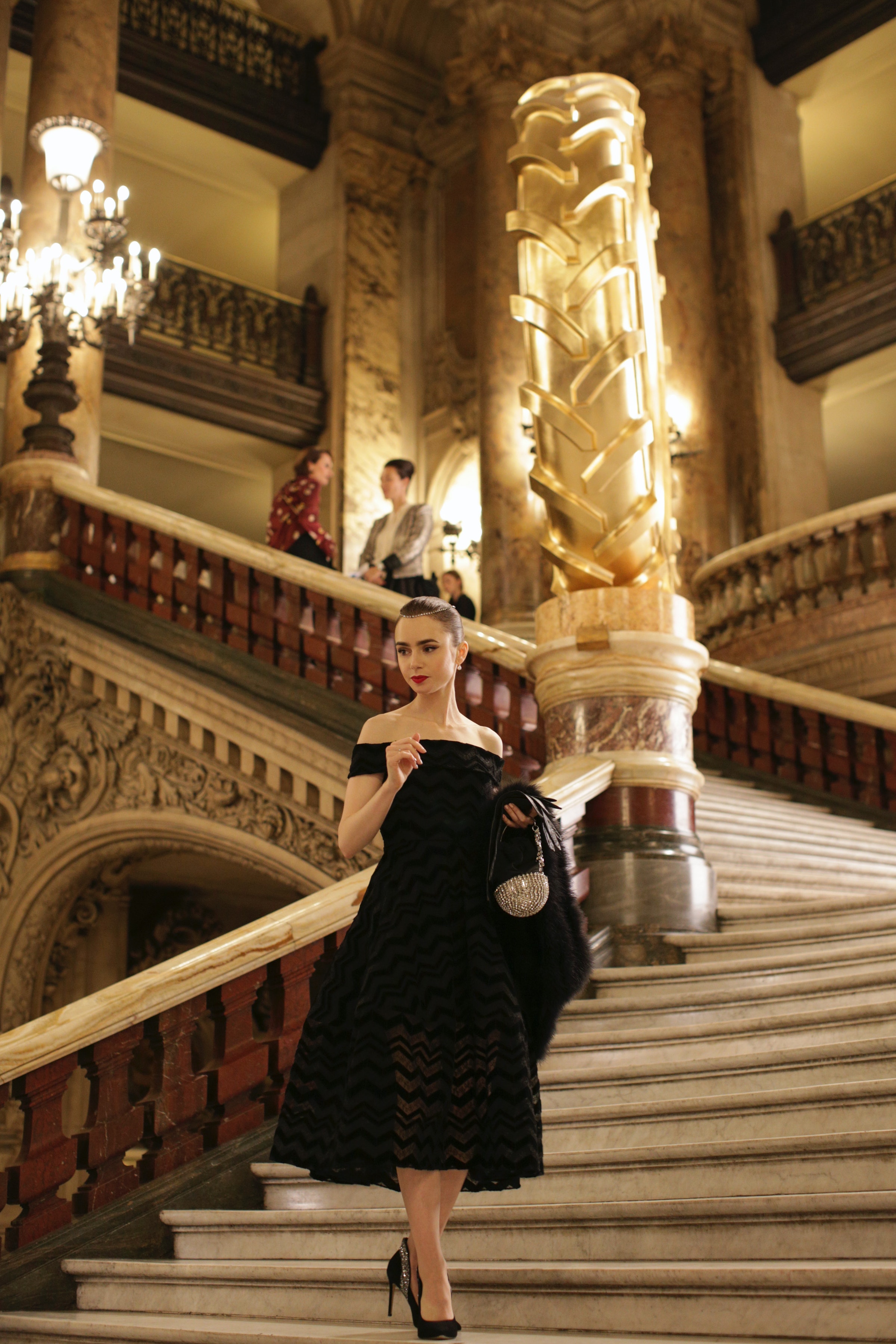 Field believes that Collins looks just like the famous movie star (she’s not wrong!), so Emily’s Christian Siriano look for the ballet is an homage to Hepburn in Funny Face.

Lily Collins Got to Keep Some of the Costumes

The dress that Emily ends up modeling toward the end of the season is an Haute Couture Dress design by Stephane Rolland Haute Couture. Rolland gave Collins a clean version of the dress and shoes to keep.

Emily’s Phone Case Has a Backstory

Emily’s camera phone case becomes a signature accessory for her, partly thanks to Collins pushing for it. She told Glamour, "I kept thinking it’s super fun, and Emily loves photography. Plus, Emily is really obvious, so wearing a big camera around her neck says it all."

Gabriel Was a Chef IRL

Bravo told Manny the Movie Guy that he was a sous chef years ago, so it made him realize he could easily play Gabriel.

Lucas Bravo Had to Audition *A Lot* For His Role

Bravo was brought in to read for his role several times and Star said that he "put him through the ringer for months." It all worked out in the end!

Collins used to be fluent in French but stopped practicing it regularly. But once she started working in Paris for the series, she started dreaming in French.

A Famous ‘Sex and the City’ Location is Featured

When Emily meets up with a famous American actress at her hotel, Sex and the City fans will recognize the Hôtel Plaza Athénée as the same place Carrie stayed when she went to Paris.

The Writers Lived in Paris As Part of Their Research

Star had the whole writing team live in Paris so they could incorporate their own experiences into storylines for the show.

Season 1 of Emily in Paris is streaming on Netflix now.