20 Sophie Turner Clapbacks That Were Brutal, But So True

There’s no denying that Sophie Turner wears a lot of crowns. Of her many identities, standouts include Sansa Stark, professional wine-chugger and, most importantly, clapback queen. Sophie knows sass better than the rest of us, and watching her dish it is always pure hilarity. The Game Of Thrones star may be an angel 99.9% of the time, but when she throws shade, it can sometimes (read: usually) be brutal AF. These Sophie Turner clapbacks are so witty that it’s almost mind-blowing.

From not-so-subtle shade on Twitter to hilarious (but loving) jabs at her hubby, Joe Jonas, Turner has got some serious jokes under her belt. But she also gets serious, calling out racism, and instantly shutting down anyone who even dares to body-shame women on the internet. The famous funny gal may have been blessed with acting chops, but sometimes, I think she might have missed her true calling as a comedian. Few people on the internet do sarcasm better than Queen Sansa Stark and, at this rate, she’s holding her own among the social-media elite. (Yes, that’s you, Chrissy Teigen.)

So, please join me in reflecting on the most epic clapbacks Turner has gifted the internet through the years.

1. The Time She Roasted Donald Trump

When a fan tweeted "Name a better duo" alongside a photo of Donald and Melania Trump, Turner could not hold back. The actress swiftly replied with a side-by-side image of a fork and an electricity outlet.

When Turner’s now-brother-in-law, Nick, posted the below photo comparing himself to a character from Game of Thrones, Sophie chimed right in.

"Quit trying to manipulate me……. ugh I thought you died last season," she joked.

3. When She Left A Snarky Comment On Her Hubby’s IG

After Joe called a fun day out with his brothers the "best day ever," Turner was unimpressed.

"Really? The BEST day EVER?! Interesting……," she teased in a comment below the pic. What about your wedding day, Joe? Remember that?

Don’t worry though, Jonas quickly cleared up any confusion for his wife. "True. This is the 2nd best day ever," he wrote, with the laughter emoji.

4. The Time She Clapped Back About A Fashion Faux Pas

When Sophie was caught red-handed wearing socks with sandals, she let the photographic evidence roll right off her shoulders with a joke about it.

"Nah we’ve all been taking out the trash like this for years and you know it. I’m not trying to make anything happen other than giving my feet some much needed TLC," she replied when hit with media scrutiny.

5. When She Laughed Off Headlines About Her Crying

After Turner was photographed in tears while out with her then-fiance, she let the world know what was really going on that day.

“Lol. Thank god I have a loving fiancé. Periods are a bitch,” Sophie wrote on her Twitter account. And that’s the tea, as Turner would say.

Turner was not shy when revealing her disdain for social media influencers who promote dieting products that could have negative side effects. Which is why the actress took to her Instagram story with a parody video dragging them.

“Hey you guys, just kind of going for my influencer look today,” Turner said in a fake accent in the video. “Today I just wanted to promote this new powdered stuff that you put in your tea, and basically it makes you s— your brains out and is totally really really bad for me to be promoting to young women and young people everywhere but I don’t really care because I’m getting paid money for it,” she added, before tossing up the peace sign.

7. The Time She Clapped Back At Society’s Archaic Ideals

Turner may now be married to Joe Jonas, but that doesn’t mean she’s taking his last name. She poked some fun at the prospect in an interview with People at the 2019 Met Gala.

“So I know a lot of people have been waiting to find out my new name, my name reveal and so I am really excited to be able to share it with you guys now. My new name is Sophie Vuitton. Sansa Fierce. Louis Turner," she joked.

8. The Time She Dissed "Disrespectful" Fans 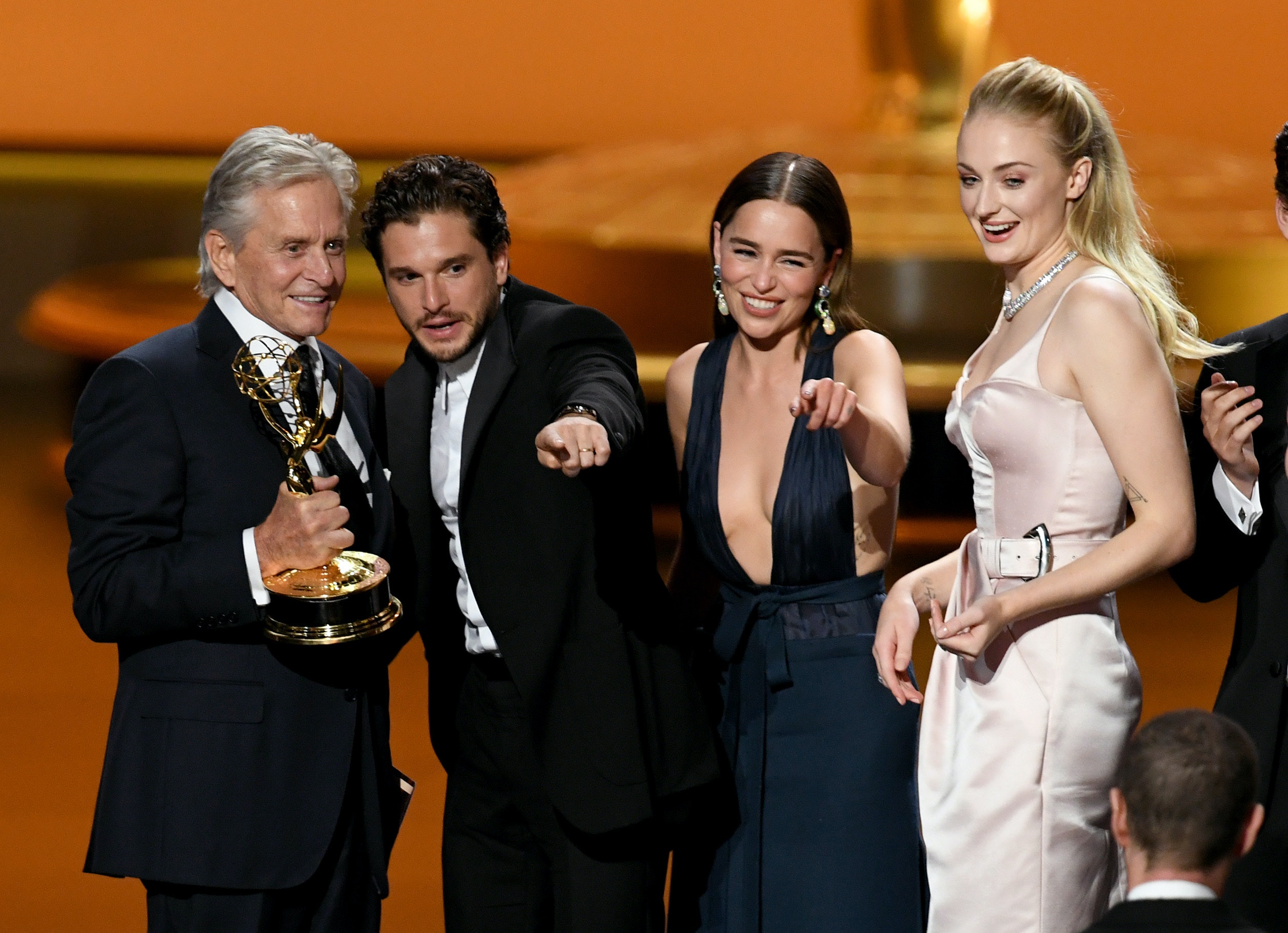 In an interview with the New York Times, Turner had some words for those who were shading the last season of Game of Thrones.

“I think it’s disrespectful to the crew, and the writers, and the filmmakers who have worked tirelessly over 10 years, and for 11 months shooting the last season,” she said after a petition arose calling for a re-shoot of the last season. “So many people worked so, so hard on it, and for people to just rubbish it because it’s not what they want to see is just disrespectful."

9. The Time She Shaded Trump (Again)

Just in case she wasn’t clear the first time regarding her stance on the current U.S. president, she reiterated it.

"Ugh so sad. Just been diagnosed with Trump Derangement Syndrome. Please help," she wrote in a January 2019 tweet.

10. The Time She Had Serena Williams’ Back

Serena Williams sported a short, form-fitting bodysuit at the 2019 U.S (and looked amazing while doing so, FYI), and people had a problem with it for some reason. Turner, however, was all about it and came to her defense.

"Serena can wear whatever the f*ck she wants," the star insisted in a tweet.

Another prime example of how not here Turner is for social media influencers. "Good lord people are the worst," she wrote on Twitter after learning an exclusive "influencer" wall was hitting L.A.

12. The Time She Clapped Back At Over-Aggressive Fans

After a fan shaded Stranger Things star Finn Wolfhard for not stopping to chat outside his hotel, Turner was not having it.

"Damn… seeing fully grown adults wait outside the ‘Stranger Things’ kids’ hotels etc , and then abuse them when they don’t stop for them…" she started.

She continued: "Is [sic] super weird A. What adult in their right mind waits for a CHILD outside their hotel and B is then is offended when the CHILD doesn’t stop."

Turner had a lot to say about the subject of fans expecting the world from celebs. "It doesn’t matter if they are an actor… they are kids first. Give them the space they need in order to grow without feeling like they owe," Turner tweeted later.

14. That Time She Clapped Back At A Racist Fan

When Turner came across a racist meme that included her Game Of Thrones character, Sansa Stark, she had some words.

The now-deleted post read: "White people are the product of 50,000 years of evolution. Do not destroy our genetic legacy by race mixing. Do it right! Date and marry white."

Obvi, Turner shut that down.

15. The Time She Let Piers Morgan Have It

Perhaps, one of Turner’s most scathing clapbacks to date.

After Piers Morgan implied that celebrities are trying to glorify mental health issues, Turner went in on Twitter (and understandably so).

"Or maybe they have a platform to speak out about it and help get rid of the stigma of mental illness which affects 1 in 4 people in UK per year. But please go ahead and shun them back into silence. Twat," she wrote.

16. The Time She Clapped Back At A Shady Article

For Turner, family comes first, and after a The Cut article implied Nick Jonas and Priyanka Chopra’s marriage wasn’t genuine, Turner took to Twitter to clap back.

"This is wildly inappropriate and totally disgusting. Very disappointed that The Cut would give anyone a platform to spew such bullshit," she wrote.

17. When She Threw Some Subtle Shade At Diplo

Sophie and her hubby tried to keep their wedding hush hush but, as fans know, the word got out.

Turner gave an interview with Porter where the writer noted that their Vegas wedding ceremony was supposed to be private.

"But it’s tricky when people live stream it,” Turner added, alluding to the fact that Diplo livestreamed their wedding.

But that’s all water under the bridge now, and Diplo was ultimately forgiven.

18. When She Hit Back At Body Shamers With This Message

While not a traditional clapback, the moment Turner put her Game of Thrones bestie, Maisie Williams, on blast on Instagram over her sex scene with Joe Dempsey in the show’s final season has to be on this list.

"In honor of Easter, I guess Game of Thrones wanted the storyline to have a little Easter bunny hop, hop, hoppin’ into that pussy… and that’s the tea," she said about the scene on Instagram, as she sipped some wine from a glass.

If I had to choose who Turner was clapping back at, it would definitely be the GoT writers for waiting this long to give Arya her — what did Turner call it? — "Easter bunny hop" scene.

20. The Time She Stuck Up For A Friend

When U.S. soccer player Alex Morgan was bombarded with hate over the way she celebrated a goal by "sipping tea," despite not being a fan of her team, Sophie was sure to defend her — one tea-sipper to another.