6ix9ine Gets Drink Thrown at Him, Chucks His Right Back at UFC Fight 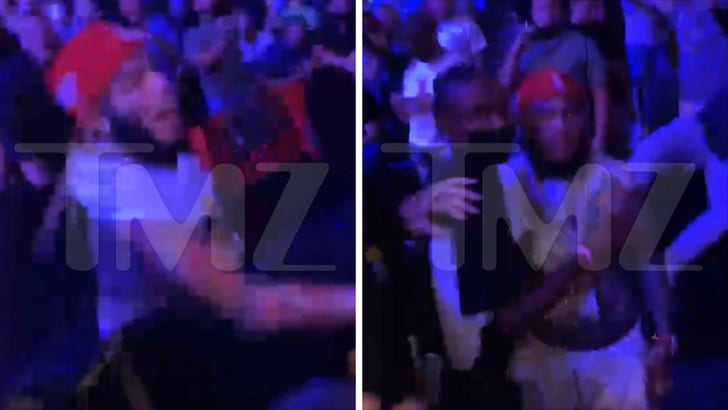 Tekashi 6ix9ine might be on probation, but the dude isn’t afraid to fire back if someone tests him out in public — which is exactly what happened in Vegas this weekend.

The rapper showed up Saturday to the T-Mobile Arena for UFC 266 … and as he was making his way in and past fans behind barricades — he had a little face-off with someone who was NOT a fan.

Check out this video TMZ obtained of the altercation — you see 69 ignoring the taunts from this dude, who’s calling him a bitch and a ton of other insults. As he passes, the man appears to chuck something at his back, and it makes contact with Tekashi.

Eyewitnesses tell us it was the man’s drink that he threw, and Tekashi circled back to look at him … and to also a hurl a drink of his own. We’re told it looked like coffee — and it went splashing on others nearby. Security rushed in and broke it all up … ushering T69 away.

No word on whether 6ix9ine was dealt with for this — but sources on the scene say the guy who initiated it was, indeed, led away in handcuffs.

We’ve reached out to Tekashi for comment … so far, no word back.