A starry turn from Brad Pitt, whose enigmatic spaceman is out of this world: BRIAN VINER reviews Ad Astra

Verdict: Space movie with a mission

The impressive list of heroes embodied by Brad Pitt on the big screen has grown a little longer these past few weeks, first in Quentin Tarantino’s Once Upon A Time In Hollywood with his down-to-earth stuntman, and now with an anywhere-but-earth spaceman.

In Ad Astra, which is set in the ‘near future’, Pitt plays Major Roy McBride, an astronaut so preternaturally calm, even in the face of cosmic crises, that his pulse rate never climbs above 80 beats per minute.

His only misfortune as a pilot of rare skill and courage is that — to fellow space enthusiasts —he’s not as venerated as his own father, Clifford (Tommy Lee Jones), featured in flashback. 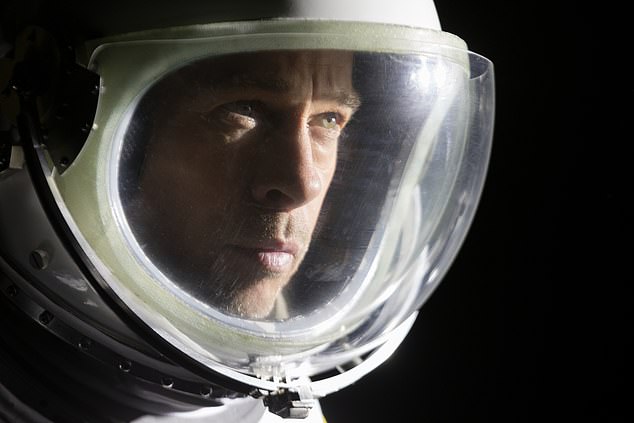 They hand Roy (Brad Pitt) the challenging task of whizzing the 2.714 billion miles over to Neptune, where his father’s vessel was last known to be, to find out if the old man is still alive and in some way responsible for this existential threat

McBride senior went missing decades earlier, when Roy was only 16, on a mission called the Lima Project, despatched to find signs of intelligent life elsewhere in our solar system.

He was the first human being to reach both Jupiter and Saturn. Back on Earth, his portrait sits next to that of Buzz Aldrin in the astronautical hall of fame.

Roy has conflicted feelings about his father, who wasn’t what you’d call a devoted family guy. But Cliff is long gone, or is he?

The top brass at SpaceComm, a kind of military version of NASA, think that a series of catastrophic power surges, endangering not just Earth but the entire galaxy, might have something to do with the ill-starred Lima Project.

So they hand Roy the challenging task of whizzing the 2.714 billion miles over to Neptune, where his father’s vessel was last known to be, to find out if the old man is still alive and in some way responsible for this existential threat. 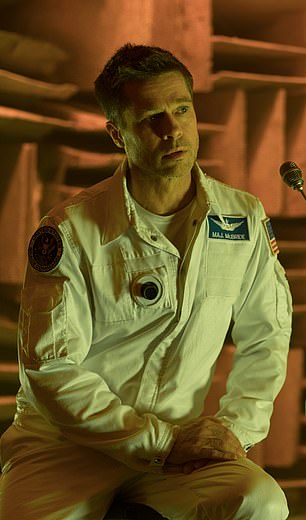 In Ad Astra, which is set in the ‘near future’, Pitt plays Major Roy McBride, an astronaut so preternaturally calm, even in the face of cosmic crises, that his pulse rate never climbs above 80 beats per minute

A gruff former colleague of Cliff’s, nicely played by Donald Sutherland, accompanies him part of the way.

Director James Gray, who co-wrote the screenplay with Ethan Gross, has set himself a challenge, too.

His aim is to turn all this into a compelling sci-fi thriller, while also making it a touching examination of a complex father-son relationship.

On the whole he succeeds, even if the science is utterly baffling, certainly to those of us who struggled with O-level Physics.

The story of Ad Astra (a Latin phrase meaning to the stars) offers some beguiling parallels with Francis Ford Coppola’s 1979 classic Apocalypse Now, and a few conspicuous nods to Stanley Kubrick’s 1968 masterpiece 2001: A Space Odyssey, which is never a bad thing in zero-gravity circles.

And Gray, whose most recent film The Lost City Of Z (2016) was also about exploration, up the Amazon, adds some witty flourishes along the way.

Roy has to begin his mission from the moon, but his SpaceComm paymasters want him to travel there incognito.

So he takes a no-frills commercial flight, on which a blanket-and-pillow pack sets him back $125. It’s the moon-travel version of Ryanair. Ryan-no-air, perhaps.

The moon, in whatever year this is meant to be, is not a serene place. In colonising it, humans have also imported greed and lawlessness.

Basically, we seem to be making the same mess of things up there as down here; Gray’s implication is that despite our adventurous spirit, space travel and human nature are not entirely compatible.

Still, Roy, a man of few words whose inner thoughts are helpfully articulated, is soon on his way to Mars, where there’s no water, but that doesn’t mean he can’t be sold up the river.

Is Roy being set up by his superiors back at SpaceComm? Put it this way, by now the audience is looking for conspiracies even in the script.

Surely there’s ambiguous meaning about fathers and sons in the line ‘I’m being pulled farther and farther from the sun’ . . . but maybe there isn’t. Maybe it’s just a line.

And that’s the kind of movie this is. It makes you think sometimes more than you’d like to, and perhaps more than you need to. But it looks out of this world, thanks to cinematographer Hoyte van Hoytema, who also worked his magic on Interstellar (2014).

And it is blessed with a superb, quietly powerful performance by Pitt, who looks just as good in a spacesuit as his old pal George Clooney did in Gravity (2013), but once again shows that he is the more versatile actor.

The Farewell is about a very different kind of family dynamic. The rapper Awkwafina, suppressing the loud comedic instincts she showed in last year’s Crazy Rich Asians, plays Billi, an aspiring writer living in New York City, whose parents emigrated from China when she was six.

Back in China, her beloved grandmother, her Nai-Nai (Zhao Shuzhen), has stage 4 lung cancer but evidently doesn’t know it, according to a cultural practice decreeing that you keep such news from loved ones who are dying, so that others can bear the emotional burden for them. 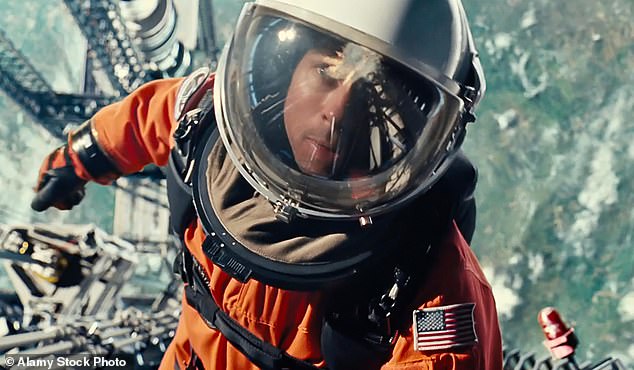 The story of Ad Astra (a Latin phrase meaning to the stars) offers some beguiling parallels with Francis Ford Coppola’s 1979 classic Apocalypse Now, and a few conspicuous nods to Stanley Kubrick’s 1968 masterpiece 2001: A Space Odyssey, which is never a bad thing in zero-gravity circles

Nai-Nai’s sister tells her that scans have merely revealed ‘benign shadows’, which is what happened in the case of writer-director Lulu Wang’s own grandmother. This explains the opening caption, that the story ‘is based on an actual lie’.

The well-meaning subterfuge continues throughout the movie, which switches between English and Mandarin.

Billi, her parents and the extended family all gather in China, ostensibly to celebrate a cousin’s wedding, though really it has been hastily arranged as a ruse to let everyone see the unsuspecting Nai-Nai for the last time.

There is plenty of charm in all this, and for a Western audience, some enlightening, often amusing glimpses of Chinese culture. But for me, the rapturous reviews in the U.S., and some extravagant praise on the film’s publicity posters, kindled expectations that simply weren’t met.

It’s a sweet enough picture, and Awkwafina does a fine job acting against type, but there’s a calculated poignancy and tweeness about it that eventually wore me down.

Feminists with their fingers on the trigger? Pull the other one!

Melissa McCarthy again turns her back on knockabout comedy, following her Oscar-nominated performance in last year’s Can You Ever Forgive Me?, in this clunky crime drama set in late-Seventies New York City and strikingly reminiscent of the recent, acclaimed Widows (though frankly I thought that wildly overrated).

She is joined by Tiffany Haddish, who is also better-known for comedy, and the ever-excellent Elisabeth Moss, together playing a trio of Irish gangsters’ wives who find themselves in financial difficulties when their feckless menfolk are sent to jail.

Let down by the roaring caricature — sorry, the mob boss — who had promised to look after them, the women decide to try a spot of criminal profiteering themselves. 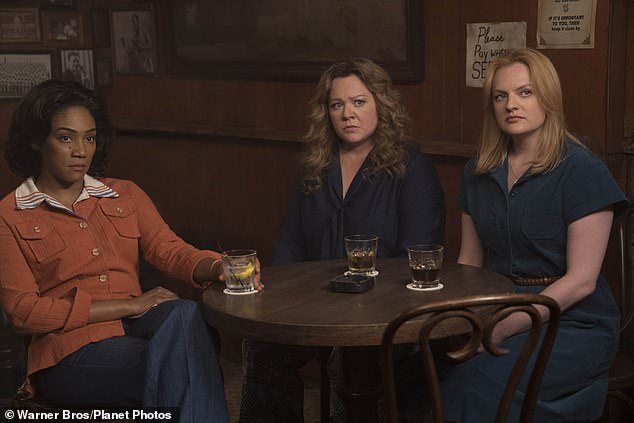 The title, by the way, refers to the Hell’s Kitchen neighbourhood of Manhattan, and also to the way our trio empower themselves by breaking free of their metaphorical shackles

A psychopath with a romantic streak, played by Domhnall Gleeson, gives them the muscle they need, and they’re up and running.

Or rather not running, having acquired unquenchable bravado seemingly overnight.

Unfortunately, writer Andrea Berloff, who has the successful hip-hop biopic Straight Outta Compton (2015) on her credits, and here makes her directorial debut, rather lets down her classy cast.

The story comes from a comic-book series, and maybe it looked good on paper, but on screen it is blunted by iffy plotting and silly dialogue, not to mention a highly questionable central premise, which presents these three women as community-spirited, feminist torchbearers.

The title, by the way, refers to the Hell’s Kitchen neighbourhood of Manhattan, and also to the way our trio empower themselves by breaking free of their metaphorical shackles.

Which is all very well, but extortion and murder are nasty ways of earning a living, whoever’s doing it.