Aaron Taylor-Johnson shows off his chiseled beach body in Malibu

Aaron Taylor-Johnson showed off his chiseled beach body as he hit the waves in Malibu on Friday.

The 31-year-old actor showcased his toned biceps as he enjoyed a day at the beach in a pair of colorful swirl-patterned swim trunks.

The Avengers star’s ripped abs and toned thighs were on full display as he strolled through the surf while holding a blue and white Boogie Board. 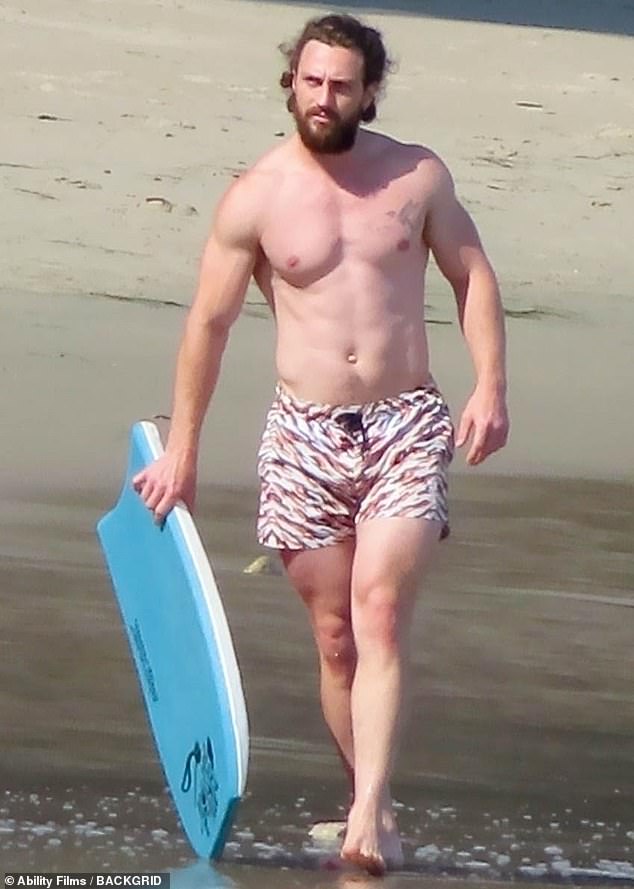 Fit: Aaron Taylor-Johnson showed off his chiseled beach body as he hit the waves in Malibu on Friday

The ink that he got in honor of his wife Sam Johnson could be seen just below the hummingbird tattoo on his chest.

In 2017, Aaron had his wife’s name tattooed in cursive font above his heart in honor of her 50th birthday.

And in June 2021, Sam used the same font to tattoo Aaron’s name on her collarbone.

Their couple’s tattooed were both done by celeb-loved tattoo artist Dr. Woo, whose clients include Justin Bieber, Hailey Baldwin, Jada Pinkett Smith, Willow Smith, Drake, Miley Cyrus and many others. 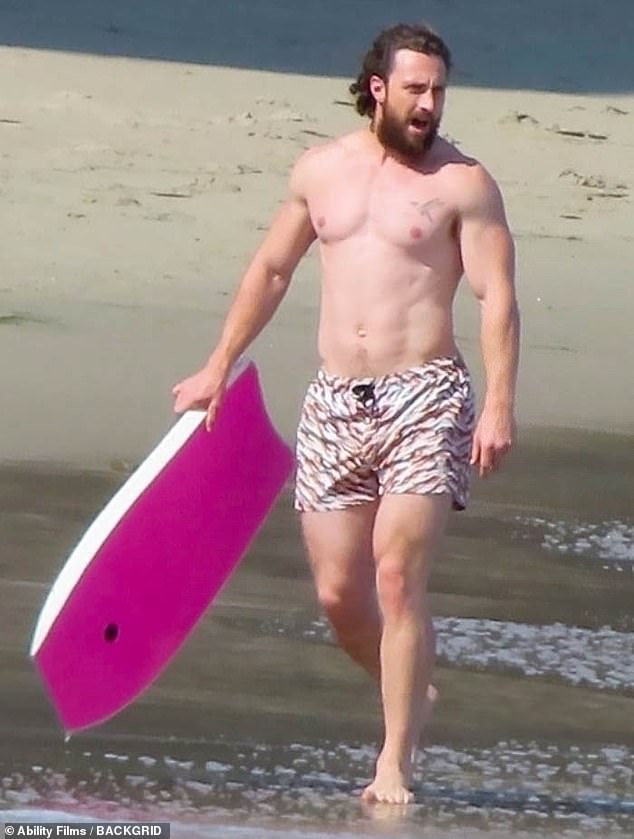 Fun in the sun: The 31-year-old actor showcased his toned biceps as he enjoyed a day at the beach in a pair of colorful swirl-patterned swim trunks

Aaron and Sam’s relationship has courted controversy due to their 24 year age gap.

Director Sam met Aaron when she cast him as a young John Lennon in her film Nowhere Boy.

They embarked on a romance in 2009 when he was 18 and she was 42. They announced their engagement at the film’s premiere in London and married three years later in June 2012. 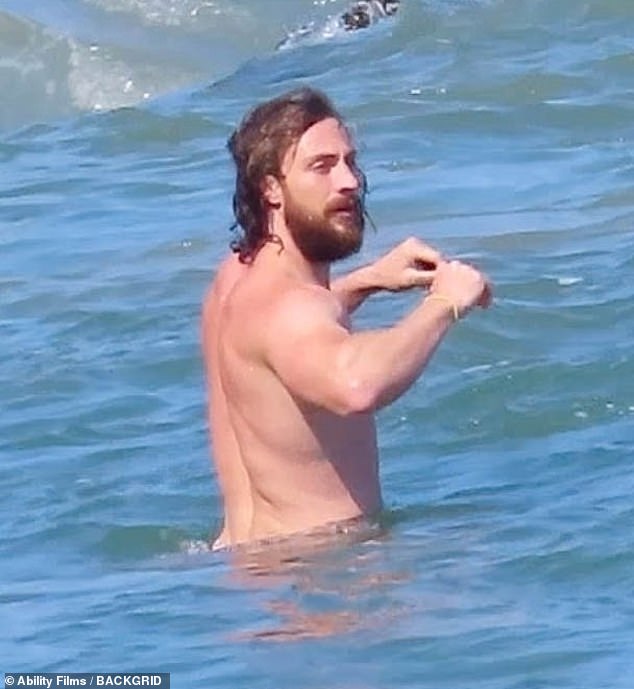 Rugged: Taylor-Johnson sported a thick beard and long locks as he submerged himself in the surf

The couple have two daughters together, Wylda Rae, 11, and Romy Hero, nine, while Sam also has two daughters from her first marriage which ended in divorce in 2008.

In addition to Nowhere Boy, Aaron and Sam also worked together on the 2019 movie A Million Little Pieces and they are preparing to film the biographical drama Rothko which is currently in pre-production.

In 2019, the pair gave a joint interview to The Telegraph in which they said that they are not bothered by critics of their relationship. 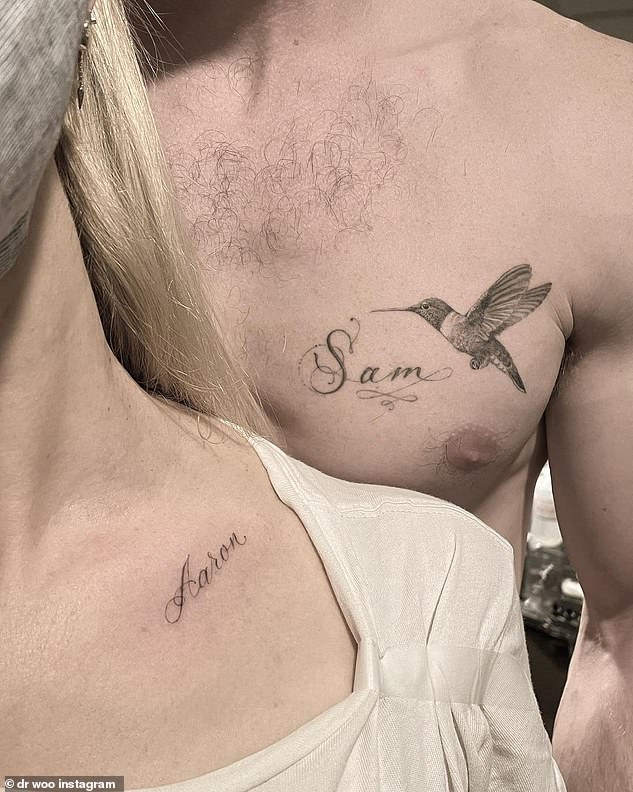 Permanent love: In June 2021, Aaron’s wife Sam Johnson got his name tattooed on her collarbone to match the tattoo of her name that the actor had inked above his heart in 2019

‘All that is my personal life, it’s sacred to me and it’s beautiful. But there is a lot of negativity around from other people,’ Aaron said.

He continued, ‘That’s their problem and their issues and however they perceive life. I live my life to its fullest and I operate from my instincts and from my heart, and I try to be as open as possible.’

Sam agreed with her spouse, saying, ‘I can’t dwell on what other people think or say.’

‘With Aaron it just literally felt like we were so connected, straight away. I didn’t know what it was then — we were connected when we were working and it was professional, and that connection grew more powerful as time went on and never diminished.’

‘And it’s the same today as it was then,’ she added. 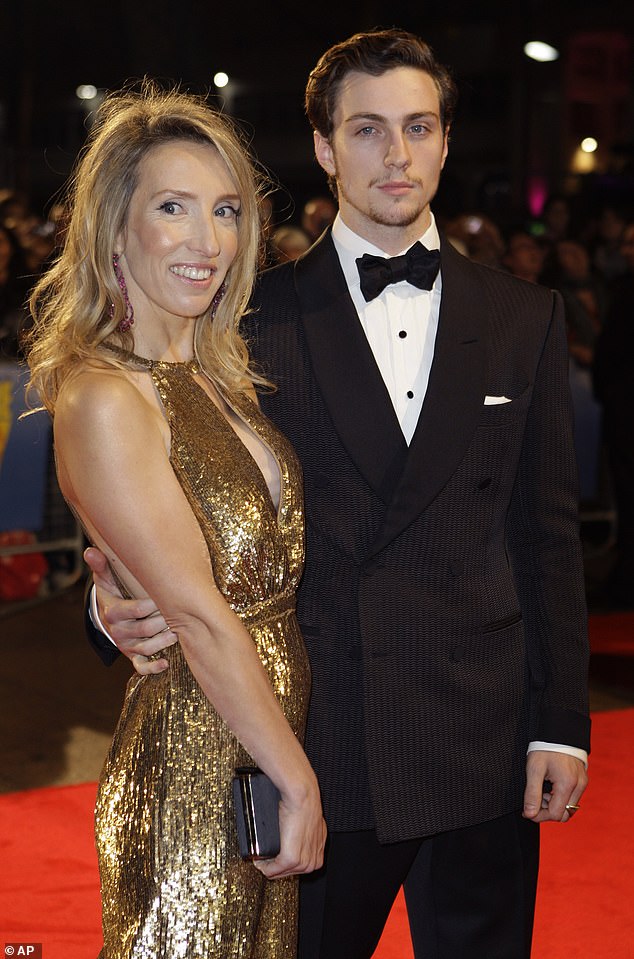 Controversial:  Aaron and Sam’s relationship has courted controversy due to their 24 year age gap. Seen in 2009