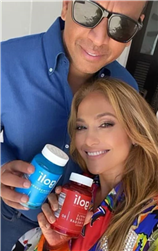 Alex Rodriguez may have struck out with Jennifer Lopez.

But the past is in the past, you know?

The former steroid-using professional baseball player is now looking ahead… and hoping to hit a home run either on his own or with a brand new lover.

Five weeks ago, of course, Rodriguez split from Lopez.

There had been strong rumors for months that their engagement was on tenuous ground, and the ultra famous couple finally confirmed on Aprill 15 that the relationship had come to an end.

“We have realized we are better as friends and look forward to remaining so,” the superstars said in a joint statement, adding:

“We will continue to work together and support each other on our shared businesses and projects.”

Concluded A. Rod and J. Lo at the time:

“We wish the best for each other and one another’s children.

“Out of respect for them, the only other comment we have is to say is thank you to everyone who has sent kind words and support.”

As you can see, the break-up seemed amicable back then, even if sources indicated that Lopez had kicked Rodriguez to the curb amid speculation that he jerked it over FaceTime to Southern Charm cast member Madison LeCroy.

Fast forward to early May, meanwhile, and the unthinkable was made, well… thinkable.

Lopez was spotted out and about with former fiance Ben Affleck, sparking chatter that the stars had actually rekindled a romance that concluded over 15 years ago.

Could these two actually be back together?!?

Yes, it very much seems, following a trip they took to Montana this month.

“They were alone,” confirms a TMZ source of this vacation. “Just the two of them.

Just this past weekend, similarly, Lopez and Affleck were together in Miami.

According to a People Magazine insider, while in Los Angeles, the singer “spent time with Ben,” adding:

“They have kept in touch every day since their Montana trip.”

“Jennifer is doing well,” this publication’s source added. “She seems very happy and excited about her future.”

Lopez and Affleck were engaged in 2002 and costarred in two awful movies, Jersey Girl and Gigli.

They postponed their 2003 wedding days before they were set to walk down the aisle… and then officially split in January 2004.

However, the pair has apparently stayed in somewhat close touch ever since, with Affleck allegedly reaching out to Lopez after she became single again this spring.

How does Rodriguez feel about this stunning romantic development?

We previously heard he was furious about the Affleck reunion.

But now he sounds downright hopeful.

“I am about to step into a new beginning in my life,” the annoying ESPN broadcast shared on social media on Sunday.

“Anything that doesn’t serve me is clearly out of my life.

“New energy is emerging. New levels are unlocking for me mentally, physically, and spiritually.

“I am remaining patient and know that this new phase of my life is coming.”

How very profound and zen of Rodriguez, huh?

He’s yet to actually name Lopez or Affleck on Instagram since the ex-lovers started to grind away on each other again.

“Now that they’ve fully reconnected, they are having fun together and care about each other a great deal,” Entertainment Tonight reports of the twosome many refers to as Bennifer, adding:

“At the end of the day, Alex wants Jennifer to be happy, but the way everything has unfolded doesn’t sit well with him.”