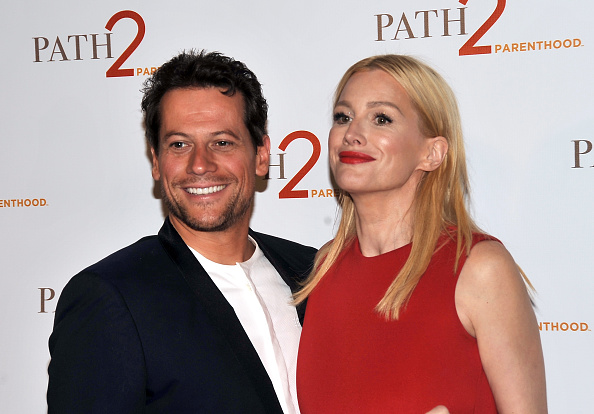 Alice Evans has accused estranged husband Ioan Gruffudd of changing her Twitter password and is afraid her children will be ‘disappointed’ by their father’s behaviour.

Ioan, 47, has filed for divorce from his wife of 13 years, nearly two months after Alice, 49, announced on social media that the Fantastic Four actor was ‘leaving the family’.

102 Dalmatians actress Alice today claimed that she was not told that Ioan had filed for divorce on Monday at the Los Angeles Superior Court.

Following the news, the actress shared two posts to Instagram with lengthy captions, in which she said she was scared of Ioan’s reaction to her continuing to publicly speak about their split and was ‘terrified’ for what tomorrow will bring.

Attached to a picture of herself, she wrote: ‘I’m scared that my little girls will be disappointed by their Dads behavior and model that in their future relations with the opposite sex. ( I did not find out my father was a s*** until I was about 32 years abs I’m convinced that that made me the woman I am today. After a certain age, they can’t take it away from you!

‘I’m also scared of my ex-husband’s response to the fact that I had commented on his sudden decision to serve me. I know he’ll be angry. ( he is always angry – he was born angry).’

The actress then claimed that her youngest daughter Elsie came home from her father’s with an article about the divorce.

She wrote: ‘Just like tonight, when my 7 yo got home from her dads and kindly, almost jokingly, but with intent showed her the article where it said that her daddy had filed for a divorce form her Mommy in the High Court of Los Angeles and he hadn’t told us so he probably hadn’t told her either so we were just letting her no abs she ran away screaming saying ‘no!! No! My daddy would NEVER do that to my Mommy’.’

Alice then ran out of space on this post, and shared another, in which she wrote: ‘I’m sorry but f*** your discomfort about my lack of dignity. F*** your cheap quips about how ‘she didn’t know! Ha ha ha what a load of b*****ks’.

‘I come here to share an experience that has all but broken me ( but won’t) and to be honest, with the x use, made me want to die). LET WOMEN TALk! !! WE ALL HAVE RIGHT TO FREE SPEECH, not just he men.

‘When my ex-husband Ioan Gruffudd finally tells me what he changed my twitter password to, (I can’t do ifinstagram DMS ITS BEYOND Me😂I invite anybody who wants to come in to talk about this subject. Don’t ever think you’re alone. Don’t ever think your subject is to silly. #wedeserveavoice !!!! [sic].’

Ioan and Alice met on the set of the 2000 film 102 Dalmatians, when Evans was engaged to Olivier Picasso, the great-grandson of Pablo Picasso.

Following the actress’s split from Picasso, Evans began dating Gruffudd, and in 2007, they tied the knot in Mexico after Gruffudd was given an ‘ultimatum’.

The pair went on to have two daughters together, Ella Betsi, 11, and seven-year-old Elsie Marigold, who were conceived via IVF.

Liar star Ioan confirmed their split via a statement reading: ‘As you can imagine, this is an incredibly difficult time for our family and we remain committed to our children. Thank you for respecting our privacy.’

Metro.co.uk has contacted a rep for Gruffudd for comment.