ALISON BOSCHOFF looks back at 30 years of This Morning

Sofa so scandalous! Thirty years since This Morning hit our TV screens, ALISON BOSCHOFF looks back at the stories behind the cosy conviviality – from a shoplifting trial, a paedophile weatherman and THAT wardrobe malfunction

Break out the biscuits, pour yourself a coffee and settle down for the phone-in and cookery slot — ITV’s This Morning is 30 years old tomorrow.

Considered revolutionary when it began because it was presented by married couple Richard Madeley and Judy Finnigan, This Morning has become a byword for cosy conviviality.

For two hours every weekday morning the daytime TV stalwart promised to envelop its viewers in a comfort blanket of true-life interviews, affordable fashion, hearty family recipes and health tips. But along with the reams of unthreatening output has come a host of unscripted calamities, both on-air and off, involving several of the show’s presenters.

It began with Richard Madeley being accused of shoplifting, saw John Leslie named on live TV as a rapist and reached its zenith with the jailing of former weatherman Fred Talbot for sexually abusing boys.

In between, there have been behind-the-scenes feuds over money and on-air gaffes galore . . . 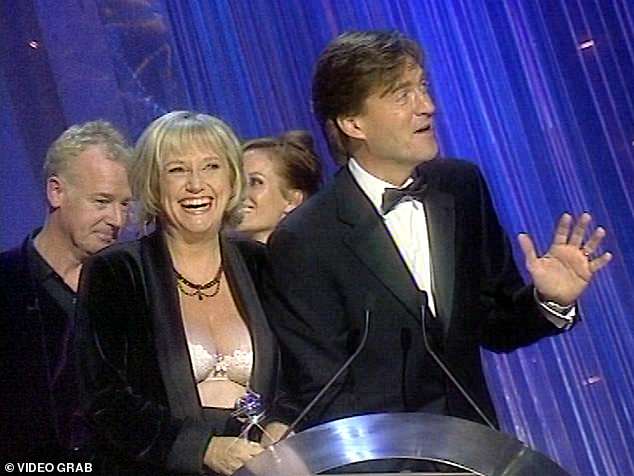 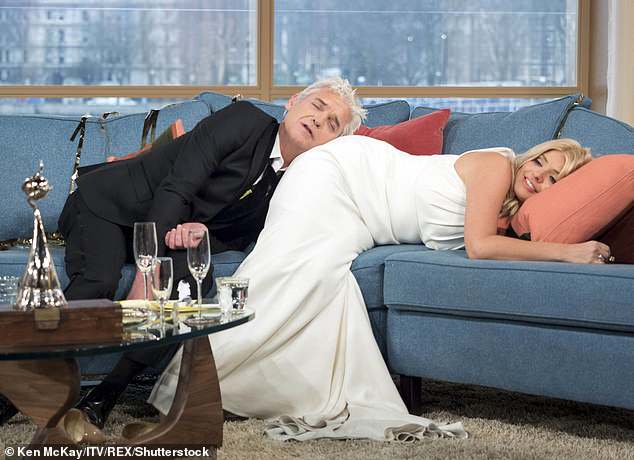 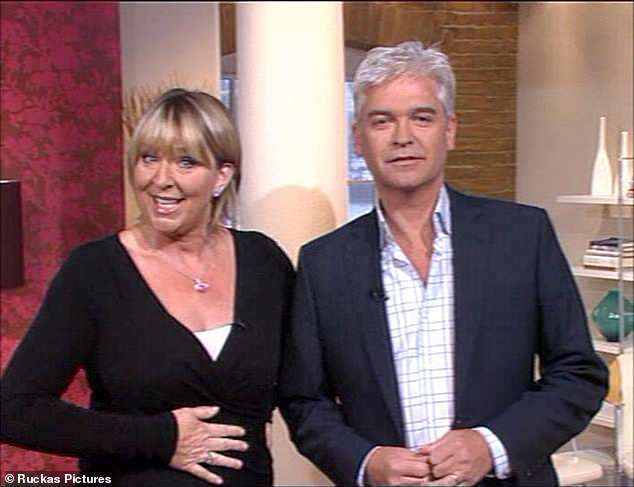 Behind the scenes, Fern was reportedly outraged to have discovered that Phillip was being paid almost three times as much as her 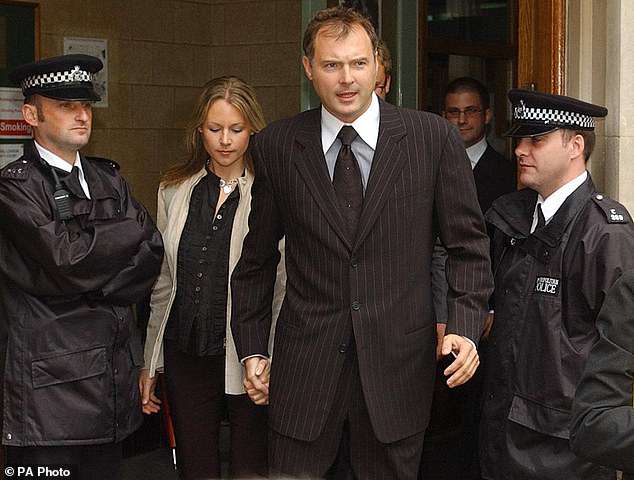 The show launched in 1988 with husband-and-wife duo Richard and Judy at the helm.

The pair had met when they both worked in regional television, and were married to other people, but it wasn’t until they had left their partners and began presenting together that their careers took off on the national stage. 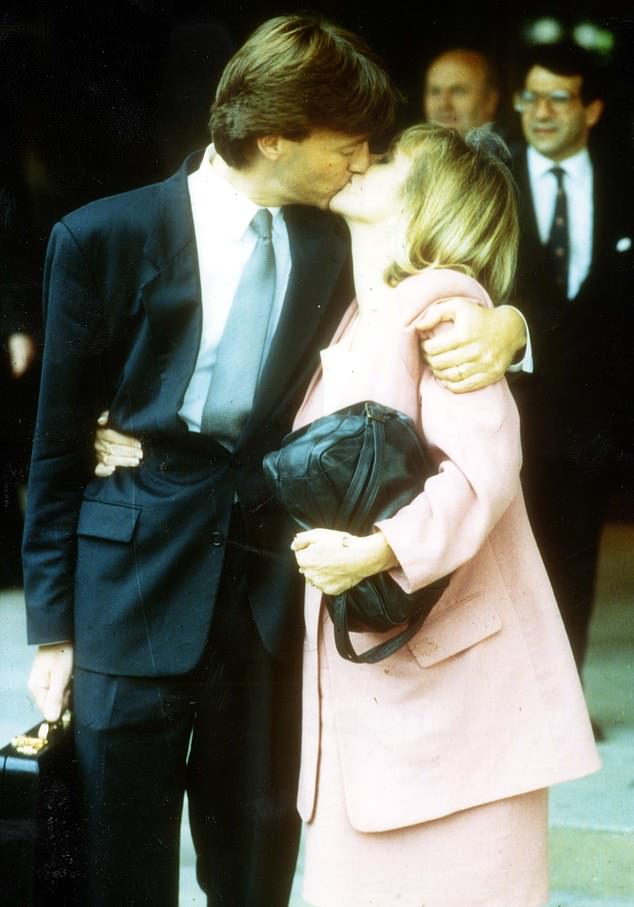 Just two years into their new show, Richard found himself in a spot of bother that even his older, and more experienced wife couldn’t make go away when he was accused of shoplifting £55 of wine and spirits from Tesco.

Manchester Crown Court heard that he had paid for shopping on the conveyor belt, but had wine and spirits remaining in his trolley which he wheeled out of the shop without paying for them.

He denied theft, saying he had just been ‘absent-minded’. Ultimately he was cleared and awarded costs, estimated at £40,000. Afterwards he said: ‘The fact I was known to be on TV had something to do with the avid prosecution of these charges.’

The show’s winning formula soon began accruing accolades and in 2000, Richard and Judy were called to the stage at the National Television Awards to receive the Most Popular Daytime show award.

As the pair began their acceptance speech, the halter fastening of Judy’s dress came loose, exposing her bra to the 200 other celebrities present in the Royal Albert Hall — and the millions of viewers watching at home. 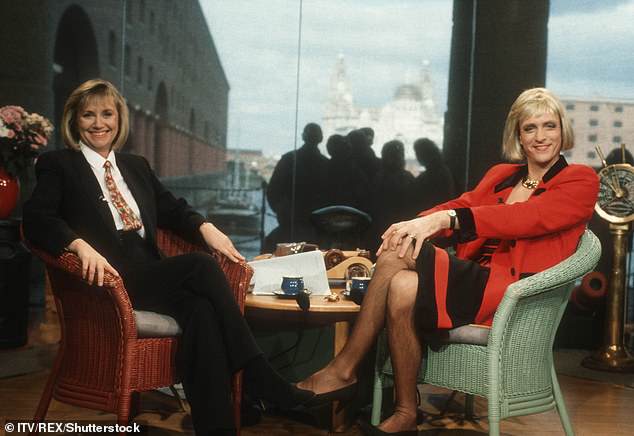 Backstage she said: ‘I really don’t know what happened back there, but I’m going to spend the rest of the night making sure it doesn’t happen again.’

The following three mornings on the show, Richard ribbed his wife about it — while she told him to ‘shut up’.

The (mostly) female audience lapped up Richard’s gloriously unguarded moments as he regularly meandered off-topic with tales about his vasectomy, his daughter’s first period and Judy’s menopause and hysterectomy.

The so-called ‘Richardisms’ were only halted by Judy hissing at him to desist. But behind the amusement, lay the threat of legal action for the show’s producers.

Richard once said the creator of cartoon Roobarb And Custard must have been on drugs — a libellous joke, which resulted in an on-air apology. 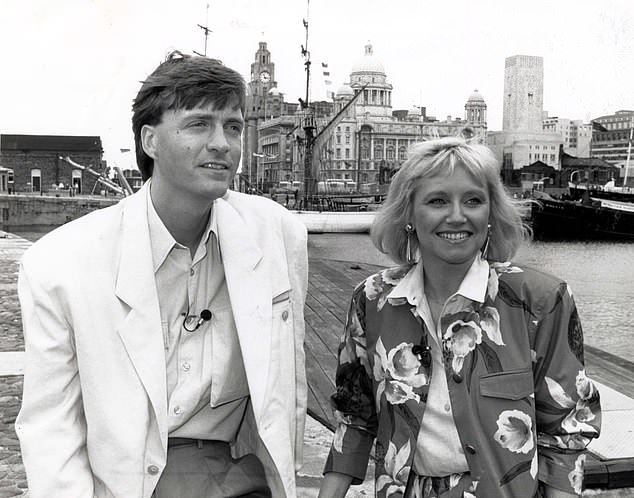 There was also talk of a box marked RSI, short for for Richard’s Stupid Ideas, in which researchers were said to file his better gems — although ITV did deny at the time that this existed.

Madeley also enjoyed dressing up on the show and made toe-curling appearances as Ali G and even as his wife, Judy.

In 2001, after nearly 13 years, Richard and Judy stunned everyone by jumping ship to a teatime show at Channel 4.

Many blamed a mid-life crisis on Richard’s part when he likened presenting This Morning to living in the film Groundhog Day and said Channel 4 was ‘just a more exciting gig’. But behind the scenes the pair had a tricky relationship with executive Maureen Duffy, known as Duffy The Vampire Slayer, who had a reputation for being abrasive.

Duffy had changed the title sequence, altered a Dream House promotion and introduced the ‘Midday Money’ quiz, which Richard and Judy thought was downmarket.

‘Who thinks of these stupid questions?’ tutted Richard after asking viewers to phone in and say what colour tomato juice is.

Meanwhile, Judy also complained of ‘overwork’ and had asked to work on the show only four days, not five.

Judy said: ‘When I get to my deathbed, I want more to show for my life than simply having worked a 15-hour day.’

Despite the warning signs, ITV boss David Liddiment was astonished to receive a fax from the couple announcing they were off. Reportedly, he sighed: ‘At least it’s not Cilla.’

After Richard and Judy’s defection to Channel 4, former model Twiggy was asked to present the show with singer Coleen Nolan.

Matching the chemistry of their predecessors was always going to be a big ask, and the two women struggled, with viewers taking against Twiggy in particular. Some even started a campaign to get rid of her, saying that she was ‘wooden’ and ‘unsympathetic’ to guests.

She was sacked only four weeks into the job, but the blow was softened by an £80,000 pay-off. 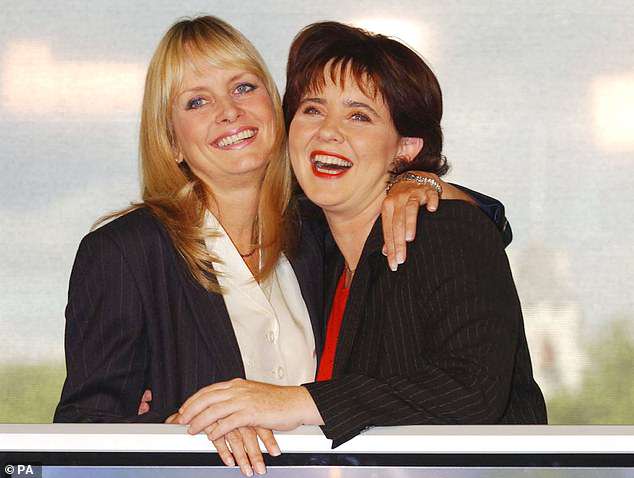 Next up came former Blue Peter presenter John Leslie who was promoted from Friday stand-in to regular host at the end of 2001. He was on the sofa for nearly a year before being suspended after Ulrika Jonsson said in her autobiography that she had been raped by a fellow TV presenter when she was only 19.

After days of feverish speculation about the attacker’s identity, TV presenter Matthew Wright named Leslie on his Channel 5 show.

Numerous other women subsequently came forward to say that they had been propositioned by Leslie, and in 2002 the 6ft 4in Scot was arrested on one count of rape and two of indecent assault.

The following year he was charged with assaulting a woman twice, but the prosecution dropped the charges in July 2003.

On the court steps after he was cleared, Leslie said he had ‘been to hell and back’ and that he had ‘maintained [his] innocence throughout’. In a later interview he admitted that his behaviour around women had been ‘inappropriate’ at times’.

In 2008 he was arrested in relation to an alleged rape dating back to 1995, but no charges were brought. And last year he was charged with sexually assaulting a woman at an Edinburgh nightclub, but the court found the charge not proven. Leslie’s TV career has never recovered from the original allegation.

Leslie’s co-presenter had been Fern Britton — lured to the show in a bid to resurrect the winning male-female dynamic. With Leslie’s abrupt departure, the male co-host slot was handed to Phillip Schofield, the former BBC children’s presenter.

Viewers were convinced they had natural chemistry, but in March 2009 Fern surprised many by announcing that she was leaving to spend more time with her family.

Behind the scenes, Fern was reportedly outraged to have discovered that Phillip was being paid almost three times as much as her — £2 million a year to her £700,000.

A source said: ‘From day one, he began to interfere with the editorial content of the show. Fern always left it to the editor, a mistake she attempted to rectify, but too late.

‘His stranglehold was too tight by the time she recognised what he was up to.’

Matters weren’t helped by the fact that Fern was also embroiled in a row over her apparent failure to disclose the fact that her 5st weight loss was due in large part to a gastric band she had had fitted in 2006.

Fern — whose second husband, chef Phil Vickery, is still a regular contributor to the show — was not invited to the studio for the 25th birthday celebrations which her former co-host anchored.

In September 2009, Phil was joined on the sofa by rising star Holly Willoughby, and this time the pair seemed to have a genuine chemistry both on and off the air. Indeed, their families regularly holiday together.

Three years into the new pairing, Phil committed probably the most egregious on-air blunder of all when he handed Prime Minister David Cameron a list of supposed paedophiles on live television — with the name of a Conservative politician clearly visible. 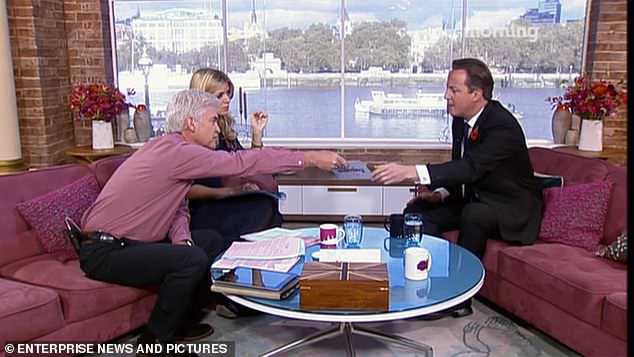 He agreed to split the resulting libel damages and legal costs with ITV, meaning a loss of at least £62,500 from his salary. Other Phil highlights have seen him being propositioned by 85-year-old escort Sheila Vogel-Coupe when she was on the show.

Schofield regularly tops polls of the sexiest men with grey hair, and in April this year posted a picture from a holiday in which his naked buttocks were ‘accidentally’ visible.

TV weatherman Fred Talbot was on the show from 1988 to 1999, and was famous for his jolly meteorologically themed knitwear and for leaping from Britain over to Ireland on the floating UK weather map in the Albert Dock, Liverpool, where the show was filmed before its 1996 move to London.

However, in 2013 he was accused of historical sex offences against pupils at a boys’ grammar school in Cheshire, where he had worked as a science teacher during the Seventies. 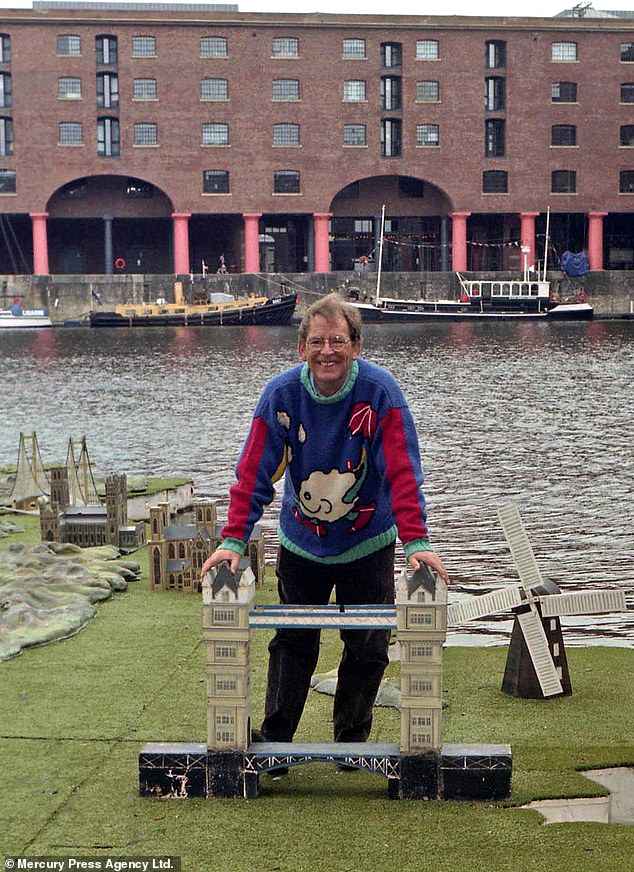 Fred Talbot (pictured) was on the show from 1988 to 1999, and was famous for his jolly meteorologically themed knitwear

In court, he admitted to having had ‘sexual encounters’ with three or four sixth- formers, saying: ‘It was really minor.’

He was jailed for five years in 2015, and received further jail terms in 2017 after being convicted in Scotland for offences carried out during school trips north of the border between 1968 and 1981.

Judy Finnigan said after his conviction: ‘We honestly all just thought he was the nice, sweet weatherman. He was always quite a solitary person, and we didn’t know him very well, but it was a total shock.’