Amir Khan has found himself back in hot water just a month after becoming a dad for the second time.

The boxing champion, 31, whose marriage with Faryal Makhdoom, 26, almost came to an end last summer, has been accused of cheating on her again, this time with a pretty beautician he met in a London nightclub.

According to the Sun, Amir was out on May 11 at Libertine near Oxford Circus when he met brunette Sophia Hammani, who was invited to meet the boxer by his security guard. At the time, she says, she thought he was single having seen him telling his Twitter followers he was divorcing Faryal last year, and not knowing they’d actually reconciled.

The pair spent hours flirting before she claims they moved on to a shisha bar – and Amir stroked her leg in the white Range Rover they drove in.

The former I’m A Celebrity campmate was "acting and talking as though he was single", despite his wife having given birth 17 days previously, Sophia said.

After an hour, Amir seductively whispered for her to join him in his hotel room, Sophia claimed, and the pair drove to the Montcalm Hotel in Shoreditch.

"Amir walked ahead up the stairs to the room," Sophia told the newspaper.

"I put on some music and he came out the bathroom in just his white boxers. He kept saying my body was insane and I was like a model." 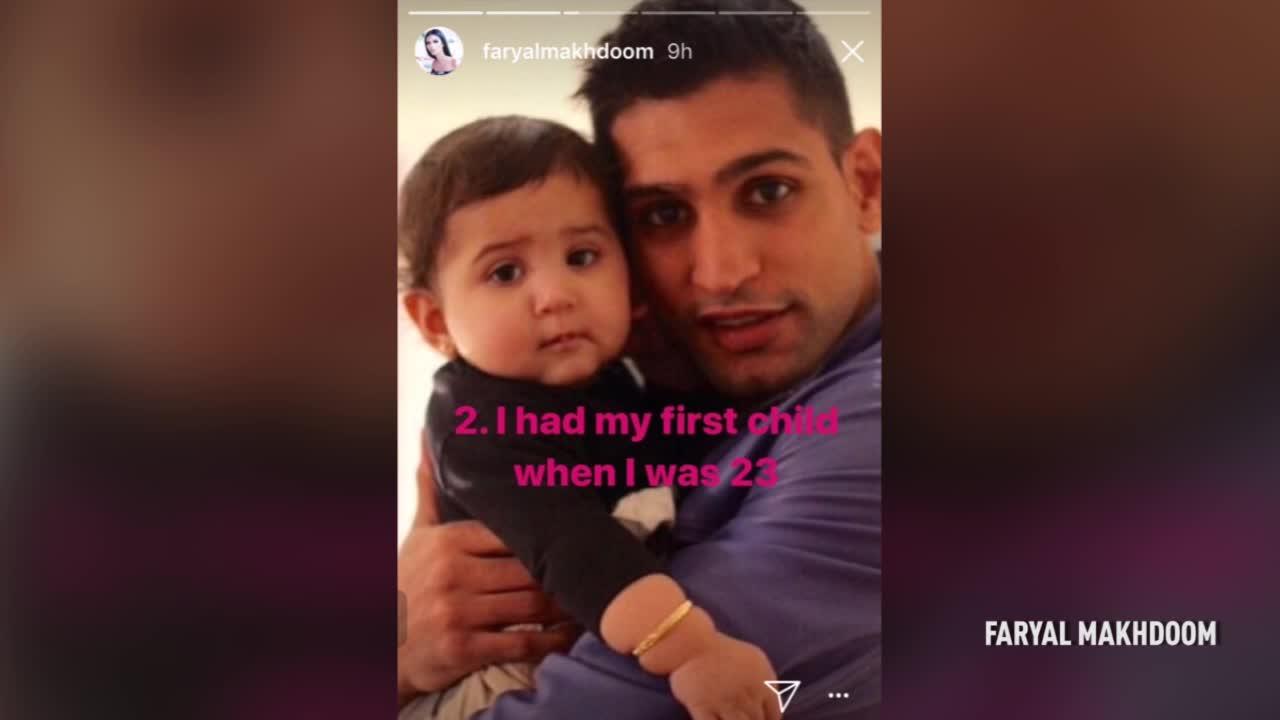 The next morning, Amir took her number and told her he had to go to a meeting, leaving her £20 to get a taxi home – but her real fare came to £50, she said.

It wasn’t until she got home that she discovered the truth about Amir’s marriage: that he wasn’t getting divorced at all.

She claims he called her later that day to say that with Ramadan coming up, she should "do her own thing" and he’d be in touch when he was back.

Fuming Sophia then decided to text him to tell him she knew about Faryal.

"He just said to stop texting as he was with people," she said. "I never heard from him again."

But devastated new mum Faryal discovered Sophia’s number on her husband’s phone and confronted her to get to the truth about what happened.

They had a "sisterly chat", Sophia claims, despite being terrified Faryal would be furious with her.

"He’s disgusting. He slept with me and his wife had just given birth. I nearly threw up when I saw they were still together. I felt so used," Sophia told the paper.

"That must be every wife’s nightmare. That poor woman. She needs to bin him off once and for all. Surely this is un­forgivable?"

But Faryal appears to have already let the incident slid, as she tweeted in the early hours of this morning hinting at forgiveness.

It wouldn’t be the first time Faryal has drawn a veil over Amir’s indiscretions.

Even after the couple, who married in 2013, made amends after last summer’s split, Amir was accused of seeing Pakistan model Alyzeh Gabol, even visiting her in Dubai.

Then in January this year, model Emma Bond claimed the boxer sent 77 messages begging her to hook up with him while whining about being ‘trapped’ in his marriage and branding his long-suffering pregnant wife a "gold-digger".

That came just days after his and Faryal’s joint Good Morning Britain appearance, in which he said he’s a "changed" man and would put his family first.

Mirror Online has contacted reps for Amir and Faryal for comment.