Things we know: Prince William and Kate Middleton met and fell in love in college after he saw her walking a fashion show in what we can all agree was a truly iconique outfit. Things we didn’t know? He was fully SMITTEN from day 1.

A former college classmate of William and Kate’s named Laura Warshauer spoke to People for the magazine’s special William & Kate: 10 Joyous Years, and said that they “definitely had chemistry” from the beginning: 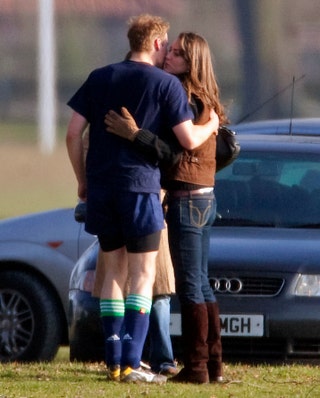 I mean, clearly it was something because these two were engaged by 2010 after 9 years of friendship / dating. As People notes, they opened up about their college days together in their engagement interview, with Kate saying “I actually think I went bright red when I met you and sort of scuttled off, feeling very shy about meeting you. It did take a bit of time for us to get to know each other but we did become very close friends from quite early.”

Meanwhile, William noted that “We moved in together as friends. We lived with a couple of others as well, and it just sort of blossomed from there, really. We just saw more of each other, and you know, hung out a bit more and did stuff.”

Cute! Guess the rest is history!

You love all the deets on royal relationships. So do we! Let’s overanalyze them together.