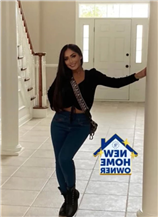 We’d say it was fun while it lasted, but … was it, really?

For months now, we’ve been hearing rumors that Angelina Pivarnick and Chris Larangeira are headed for divorce.

The couple confirmed their marital troubles on Jersey Shore with a storyline in which Chris moved out on Angelina just monts after tying the knot.

More recently, however, the Larangeiras remained tight-lipped about their struggles, which many fans took as an even clearer sign of their struggles.

Now, without saying a word about Chris, Angelina has essentially confirmed that her marriage has come to an end.

In a series of Instagram posts, she revealed to fans that she’s purchased a massive 10,000 square foot mansion in Monmouth, New Jersey.

She made no mention of Chris in the posts, and UK tabloid The Sun has confirmed that his name is not on the deed.

Other than divorce filings, we don’t think you’re gonna get a much more clear sign that these two have decided to go their separate ways.

“New home owner,” Angelina captioned her one of her pics.

“So excited guys! Can’t wait for you to all see it! Two stairs look at that,” she continued.

While Chris and Angelina’s relationship has been a rocky one from the very beginning, the couple seemed to be on the upswing in recent months.

In fact, over the summer, one insider told The Sun that the Larangeiras “better than ever.”

“They’re in the best place they’ve ever been,” said the source.

“Filming for the new season is going great so far, and Angelina has made sure to let production know that she and Chris are together,” the insider added.

“The cast is expecting to take a trip somewhere in October and Angelina has insisted that Chris be with her when they travel.”

All of this came after rumors of Angelina cheating on Chris, which the famously volatile couple handled in surprisingly mature fashion.

The situation came to a head on Shore, when Angelina’s castmates obtained a video that they claimed was proof of her infidelity.

Pivarnick shocked everyone when she offered to show the footage to Chris.

“I’m an open book. I don’t like to hide secrets and hide s–t, so I decide to let my husband know I have these videos and he said he’s good with not seeing them,” she said at the time.

“I knew Chris wouldn’t care. He didn’t want to see them,” Angelina added.

Pivarnick went on to explain that there are no secrets in her marriage, and her husband has no delusions about what sort of behavior she engaged in during their separation.

“At least we’re moving forward past this.”

But while the couple may have been able to move past that particular incident, it seems the strain of their constant bickering eventually became too much.

We’ll have further updates on this developing story as more information becomes available.