Actor Ben Jorgensen, who played Kevin Sheffield on ABC’s All My Children in the 1990s, has reportedly died from suicide at 51.

A friend of the actor, Brian Gaskill, announced the sad news on Facebook and Instagram (see below) on Tuesday.

Fans of All My Children will recall that Gaskill appeared as Bobby Warner alongside Jorgensen on the ABC soap opera.

Gaskill said he had not spoken with Jorgensen for years, but he learned that the actor had bipolar disorder.

“My understanding is it was suicide. I have heard he suffered from Bipolar disorder but as I have not spoken to him in years I do not know all the details,” Gaskill wrote. “I just want to remember the good times we had on the set of All My Children 24 years ago.”

Gaskill went on to extoll the actor’s courage for playing a gay teenager in the 1990s when public attitude to LGBTQ was relatively hostile.

“My condolences go out to his friends and family,” Gaskill concluded. “Please everybody hang in there and reach out for help if you need it.”

Sad news to report. Ben Jorgensen who played Kevin Sheffield on All My Children has past away at 51 years old. My understanding is it was suicide. I have heard he suffered from Bipolar disorder but as I have not spoke to him in years I do not know all the details. I just want to remember the good times we had on the set of All My Children 24 years ago. He was a good guy and had the courage to play a gay teenager on tv back when it was nowhere near as common to have representation as it is today. He was part of an award winning storyline…but mostly we just had some good times back then…my condolences go out to his friends and family. Please everybody hang in there and reach out for help if you need it. #Actor #Filmmaker #BenJorgensen #BenMonk #Life#Death#AllMyChildren #Suicide #sad #rest

Other friends also took to social media to corroborate Gaskill’s announcement that Jorgensen died by suicide.

A friend, Tara Rachel Jones, said Jorgensen took his life at his mother’s home in the U.K.

Another Facebook user, Chilly Pete Kirchhausen, described Jorgensen as having experienced “mental suffering” before his death.

“His mental suffering is now over and I hope he is at peace,” Kirchhausen wrote on Facebook.

Monsters and Critics also reported the death of All My Children actor, John Callahan, in May 2020. The actor died at the age of 66 after suffering a stroke.

People have been posting tributes and condolence messages on Twitter since news of Ben Jorgensen’s death broke.

Many expressed sadness and recalled the courage and great acting skills he displayed in multiple shows and movies.

“Loved him as Kevin on AMC. RIP Ben Jorgensen!!!” one fan tweeted.

“He was in a great story on ‘All My Children’ years ago as gay teen Kevin Sheffield,” another fan recalled. 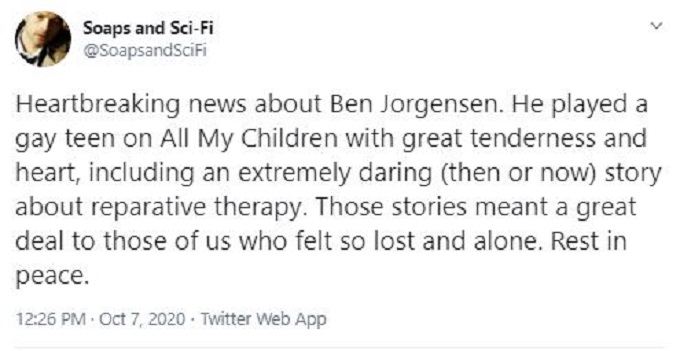 According to his IMDb profile page, Ben Jorgensen was born in London, England, in July 1969.

He had two siblings, a sister, Mahalia Jörgensen, and a brother, Stark Jorgensen.

He was an actor, as well as an editor.

According to his Facebook profile page, Jorgensen lived in New York and attended the John Jay College of Criminal Justice.

He also trained at the Scott Freeman Studio and the European School of Dramatic Art.

Besides his role as Kevin Sheffield in All My Children, Jorgensen was also known for playing Tommy in the biographical crime-drama film The Basketball Diaries (1995), starring Leonardo DiCaprio.

He played Joel Robbins in The Break (1995) and appeared in the mini-series A Wilderness of Error. He also played smaller roles in multiple short films, including Chelsea International (2016) and Invisible Alice (2016).