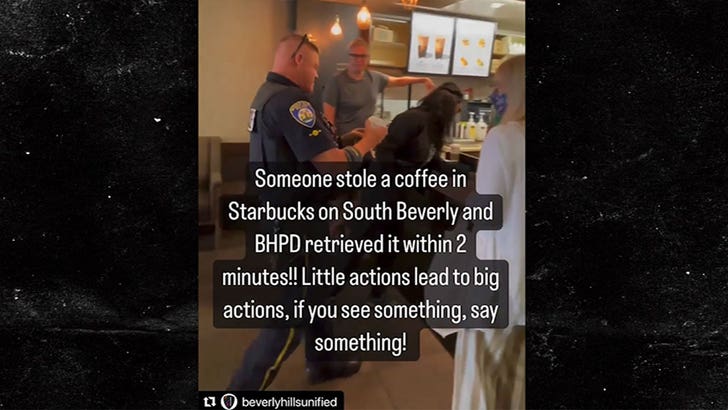 Not since Eddie Murphy have Beverly Hills cops gotten this many laughs — the department’s getting roasted for posting a video of officers nabbing an alleged thief … of one cup of Starbucks coffee.

Here’s the deal … the official Instagram page for Bev Hills PD reposted a video Thursday where folks inside a Starbucks say cops rushed to retrieve the stolen goods — likely worth $5 or $6.

The “hot pursuit” puns are flying in the comments, and there are a fair amount of coffee and donut jokes too … naturally.

Customers inside the Starbucks definitely sound happy with the officers who they say took only a few minutes to track down the man who allegedly stole a woman’s drink — but the sentiment doesn’t seem shared, at least online.

Bottom line … coffee thieves should steer clear of Bev Hills PD. Oh, and they’re not gonna fall for the banana in the tailpipe either!!!