'Black Love' Exclusive: Tabitha Brown Shares The Hilarious Story Of When She First Told Her Husband She Loved Him 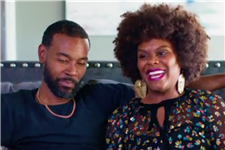 Our favorite on air celebration of Black love is back.

Season 5 of the popular docuseries Black Love premieres tonight on OWN and we’re already swooning over the new lineup of couples ready to bare their hearts and pull back the curtain on their love stories. This season of the hit show, created by filmmakers Codie Elaine Oliver and Tommy Oliver, will star some familiar faces—like, vegan influencer and media personality Tabitha Brown and her husband Chance Brown, soul singer Kenny Lattimore and his wife, Judge Faith Jenkins and Grammy-winning artist Ledisi and her husband, photographer Ronald T. Young.

On the show, couples are notoriously open about the intricacies of their marriage stories—often revealing, the good, the bad and the interesting. In this exclusive clip from tonight’s premiere, Tabitha and Chance are seen opening up about the hilarious beginnings of their Instagram-famous love.

Tabitha reveals when she first realized she might just be in love with her then-friend Chance, like so many of our love stories, things didn’t exactly go as planned.

Back in the day, Tabitha was in college in Miami while Chance was attending school in North Carolina.  Although they were just friends at the time, Tabitha had a realization that she might just be in love with him, so what she did next makes for an epic tale.

“One night I woke up, like, one in the morning, middle of the night, and he was the only person I could think about,” said Brown. “I started thinking, like, oh my God, all these years, I would see him and I’d get this pain in my stomach, and oh my God, I always had this feeling like, maybe I’m in love with him. Maybe I love him. Like, I don’t even know. Why am I thinking about him, right?

It was a strange predicament for her, suddenly having these feeling for her childhood buddy.

“Listen, he had girlfriends, I had boyfriends all through high school,” explained Tabitha. “It was never…it was over, you know? But this thing woke me up out of my sleep.”

Well, Tabitha, not wanting to let the moment pass without getting her feelings off her chest, called Chance’s dorm room in the middle of the nigh telling his roommate it’s an emergency. Tabitha poured her out to Chance, explaining that she thought she might be in love with him. As it turns out, his reaction wasn’t exactly what she’d hoped at the time.

“He said nothing on the phone, right, crickets,” she recalled. In Chance’s defense, he said he was just pretty stunned, as one might suppose he would be.

“When somebody call you in the middle of the night like this, and confess their love for you at 18, 19 years of age, that’s a lot to deal with,” he explained in the interview.

“But, he called,” added Tabitha with a smile. Afterwards, the couple share how they kept in touch over the phone and agreed to meet up to explore their chemistry when they were both back at home during homecoming.

Relationship beginnings aren’t always fairytales, and sure enough, there was a plot twist when they connected in person.

Of course, now we know the couple went on to tie the knot and raise a beautiful family together but realizing their road to the altar began with a few awkward bumps makes us smile. Watch the hilarious encounter above and tune in to the season 5 premiere of Black Love tonight at 10/9c on OWN.