Beyonce’s girl is 10! Blue Ivy looks just like her super star mom in new photo posted by grandmother Tina Knowles in honor of her birthday

Beyonce’s mom and Blue’s grandmother Tina Knowles, 68, took to Instagram to wish the little girl a happy birthday in a heartfelt tribute.

The mom-of-two posted a photo of her on the beach with Blue and said, ‘My beautiful Talented and super smart Grandaughter Blue Ivy turned 10 today!’ 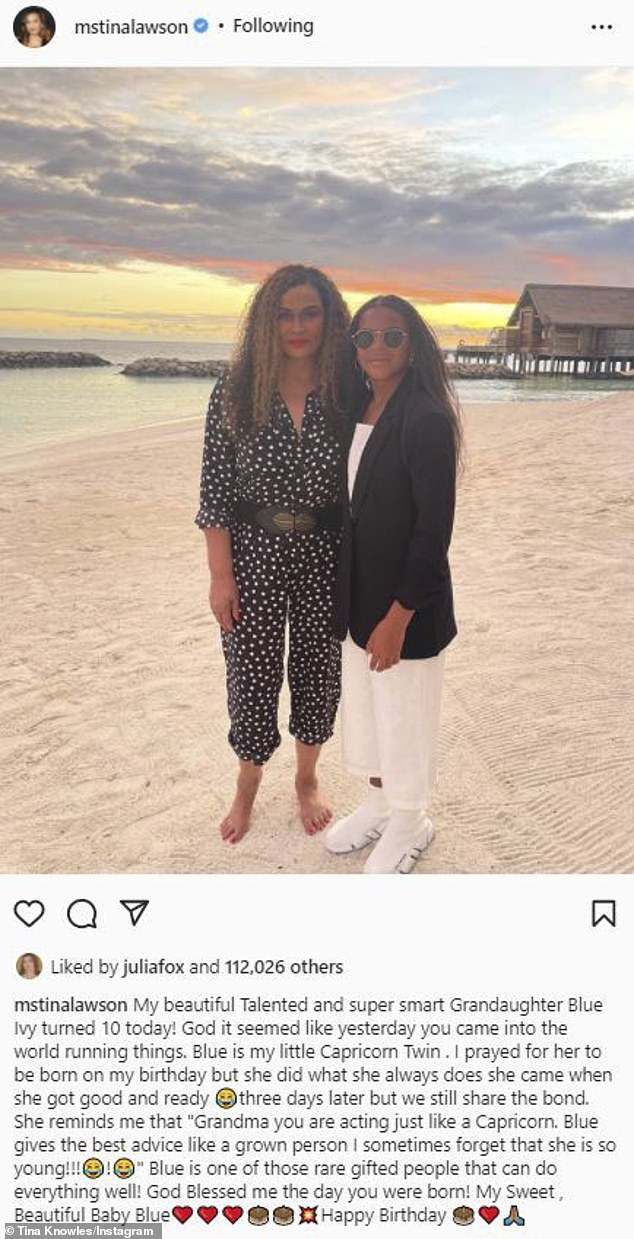 Sweet! Tina Knowles took to Instagram on Friday to wish her granddaughter a happy 10th birthday

Tina wore a black jumpsuit with white polka dots in the beachside image.

It was belted at the waist and she wore her long blonde hair in a side part with tight, cascading ringlets that fell over her shoulders.

Her granddaughter coordinated with her in a black blazer, white pants, and white Balenciaga sneakers.

Blue also wore dark sunglasses, and her hair was in micro braids that flowed down her back.

All grown up: Blue Ivy resembled her superstar mom Beyonce in the picture shared by her grandmom

Tina continued in her thoughtful caption, ‘God it seemed like yesterday you came into the world running things.’

She noted that she and her second born grandchild share the same zodiac sign: ‘Blue is my little Capricorn Twin . I prayed for her to be born on my birthday but she did what she always does she came when she got good and ready.’

Despite their birthdays landing three days apart she added, ‘…we still share the bond.’

Knowles, who’s now married to Richard Lawson, kept opening up about her granddaughter as she shared, ‘She reminds me that “Grandma you are acting just like a Capricorn. Blue gives the best advice like a grown person I sometimes forget that she is so young!!!’

Proud! Tina has showed again and again that she’s Blue Ivy’s biggest fan as she regularly notes her various accomplishments via social media

Tina gushed about the little girl as she told her 3.2 million followers, ‘Blue is one of those rare gifted people that can do everything well! God Blessed me the day you were born! My Sweet , Beautiful Baby Blue.’

The post garnered more than 200,000 likes in just two hours of being uploaded. 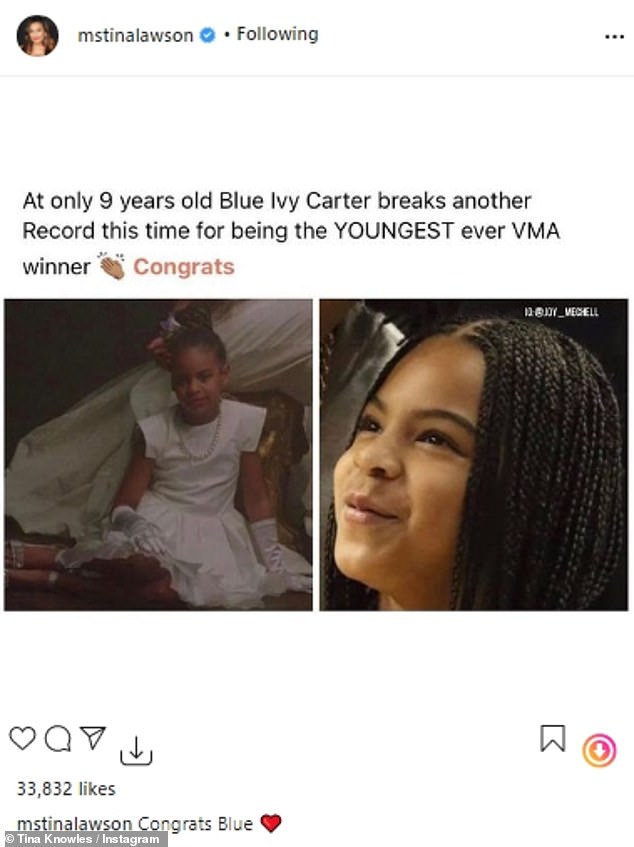 Early accomplishments: Tina was a proud grandmother as she extended a ‘congrats Blue’ when the little one became the youngest recipient of MTV’s VMA trophy

Tina has showed again and again that she’s Blue Ivy’s biggest fan. Noting her various accomplishments throughout the years she’s taken to social media to give the youngster shoutouts.

Just a couple weeks ago Mrs. Lawson reposted a congratulatory post from a fan account that acknowledged Carter’s award for Best Voiceover, Children’s Audiobook at the 2021 Voice Arts Awards.

And before that, Tina was also a proud grandmother as she extended a ‘congrats Blue’ when the little one became the youngest recipient of MTV’s VMA trophy.