BRIAN VINER reviews A Life On Our Planet

His rage at the destruction of nature is palpable, but in his latest film David Attenborough still says we live on Planet Hope: BRIAN VINER reviews A Life On Our Planet

David Attenborough: A Life On Our Planet

About 25 years ago, I had the pleasure of interviewing Sir David Attenborough. He was already regarded as a kind of wise, benign uncle to the nation. Now he’s 94, maybe we should think of him as a great-great uncle.

Sitting alone with him for an hour in a room at BBC Television Centre, asking him questions about his remarkable life and career, was, as you can imagine, one of the privileges of my own career.

But I vividly remember being surprised to find that the great man could be fierce, waspish, even a little profane.

It wasn’t a side to him we had ever seen on our TV screens. Here was a fellow, I sensed, who, even while radiating old-world courtesy and charm, didn’t suffer fools gladly. 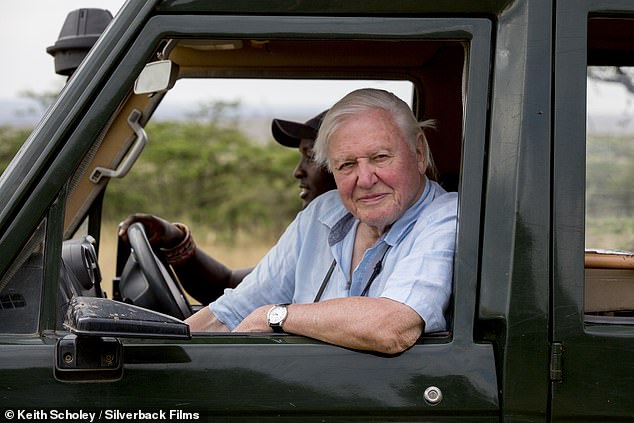 In his latest powerful and important film David Attenborough: A Life On Our Planet, which is getting a global cinema premiere on Monday before a Netflix release six days later, we finally see flashes of Attenborough’s anger

In his latest powerful and important film, which is getting a global cinema premiere on Monday before a Netflix release six days later, we finally see flashes of Attenborough’s anger.

However, his principal emotion is sadness, verging on grief, as with the help of lots of damning statistics he details the many ways in which humankind has, during the span of his own lifetime, wrecked the biodiversity on which all living creatures rely.

The planet has been forced to suffer fools, and not at all gladly.

It is a universal message made all the more potent for being so profoundly personal. Attenborough presents the film as his own ‘witness statement’, which might sound presumptuous, pompous even, coming from anyone else.

But just as the young footballer Marcus Rashford’s campaign to end child hunger takes its moral force from deprivation not so long ago in his own childhood, so Attenborough, at the other end of the age scale, is uniquely weaponised to explain why rampant deforestation, overfishing and reliance on fossil fuels have been so cataclysmic. 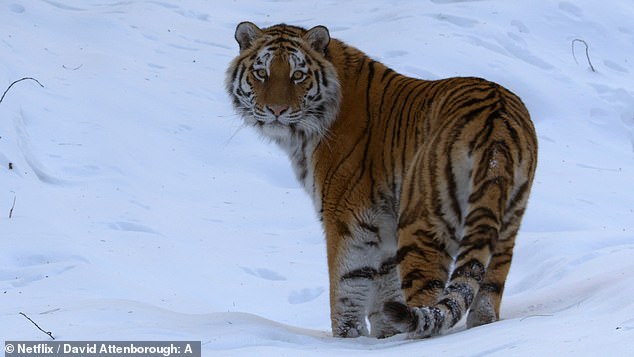 Attenborough’s principal emotion is sadness, verging on grief, as with the help of lots of damning statistics he details the many ways in which humankind has, during the span of his own lifetime, wrecked the biodiversity on which all living creatures rely

He has footage of himself 60 years ago in East Africa, 50 years ago in New Guinea, to submit as evidence of what the planet was, and what it is now.

Dramatised glimpses of boyhood cycling expeditions into the countryside, which could be twee but aren’t, remind us that the study and appreciation of the natural world has been his life’s passion.

We know he is not tossing us an empty platitude when he says that biodiversity is ‘a finely tuned life-support system’ without which humankind cannot survive.

‘It’s not about saving the planet, it’s about saving ourselves,’ he says, for once looking his age, but as adept as ever at matching the phrase to the picture.

The ocean’s coral reefs, he observes, over a shot of one of them bleached almost to extinction, have gone from ‘wonderland to wasteland’.

Of course, climate-change sceptics and big-game hunters will look on all this as the sentimental ramblings of an old man, and see the decision to bookend the film with shots of the benighted urban landscape near Chernobyl, abandoned by humanity after the 1986 nuclear calamity, as a gimmick.

More from Brian Viner For The Daily Mail…

From where I was sitting, it seemed a masterstroke. A Life On Our Planet starts arrestingly, with Attenborough roaming a derelict Ukrainian building, explaining that Chernobyl is widely regarded as the most costly environmental disaster in human history. Wrong, he says. ‘The true tragedy of our lives is still unfolding.’

If all this sounds oppressively gloomy, even without any reference to the current pandemic, which the making of the film appears to pre-date, don’t be put off.

There are still plenty of those shots of Attenborough, as familiar to us as our own family photograph albums, cosying up to gorillas and fraternising with penguins.

Indeed, the film ends on an upbeat note, back near Chernobyl with animals roaming those abandoned buildings, greenery erupting everywhere and imagined images of a futuristic world in which biodiversity has been restored.

With or without us, nature will find a way to rebuild, he says. But we can still make sure it’s with us.

The usual rider — ‘but only if we act decisively now’ — is given welcome added impetus as he considers the example of Costa Rica, where the government has given landowners grants to plant trees, and forests are burgeoning again, as well as the impact everywhere of renewable energy and evidence that population growth may at last be slowing down.

I’m tempted to say we’ll see. But the whole point is that we won’t see; our descendants will. Maybe they will also be able to point to David Attenborough’s long-ago witness statement as an example of a warning that was heeded. We can only hope.

It would come as news to Sir Arthur Conan Doyle, but Enola Holmes is Sherlock’s younger sister, invented by the American author Nancy Springer and now incarnated on screen by the talented British actress Millie Bobby Brown.

She is also, at the tender age of 16, one of the producers of a film envisaged as the first of, that dreaded word, a franchise.

Brown is splendid as the spirited Enola, raised by her mother Eudoria (Helena Bonham Carter) to be resourceful and self-sufficient: not for nothing does Enola spell ‘Alone’ backwards. 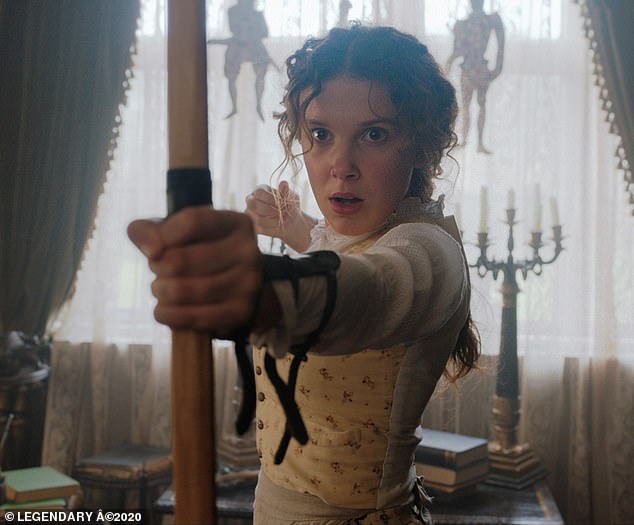 It would come as news to Sir Arthur Conan Doyle, but Enola Holmes is Sherlock’s younger sister, invented by the American author Nancy Springer and now incarnated on screen by the talented British actress Millie Bobby Brown

Bonham Carter gives one of those performances as a wild-haired maverick that she could probably knock off before breakfast; while a top-notch supporting cast also includes Henry Cavill as Sherlock, Sam Claflin as the other Holmes brother, Mycroft, and a couple of grand theatrical powerhouses in Fiona Shaw and Frances de la Tour.

But this is Brown’s show, to the extent that director Harry Bradbeer, whose credits most significantly feature the TV drama Fleabag, gets her ‘doing a Fleabag’ by conspiratorially glancing directly at the camera.

It is becoming an overused device but here it helps the narrative romp along, as Enola runs away to London to escape her cruel governess (Shaw) and, more importantly, to find her mother, who has mysteriously disappeared.

Written by Jack Thorne, whose own most significant credit in the context of this film is probably the stage production Harry Potter And The Cursed Child, it is all highly contrived, anachronistically presenting Enola as a very modern kind of adventurer while cramming in every possible late-Victorian cliché. But it’s also solid family fun. 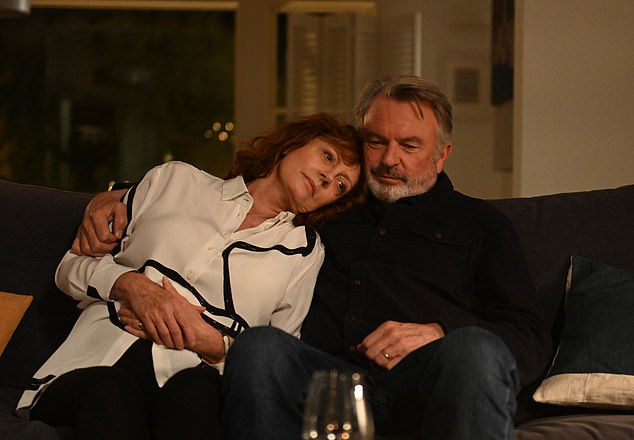 Blackbird is a remake of a Danish film about a woman, Lily (Susan Sarandon, left) in the grip of a terrible degenerative disease, whose doctor husband (Sam Neill, right) has agreed to carry out a mercy killing

Blackbird has a great cast, too, but sadly in the service of a mawkish story, a remake of a Danish film about a woman, Lily (Susan Sarandon) in the grip of a terrible degenerative disease, whose doctor husband (Sam Neill) has agreed to carry out a mercy killing.

Kate Winslet and Mia Wasikowska play her daughters, and Lindsay Duncan her best friend from college days. Just as promisingly, the director is Roger Michell, who made Notting Hill and the excellent forthcoming film The Duke.

But Blackbird, despite heart-tugging moments, is a disappointment: an unconvincing, unevenly scripted family drama.