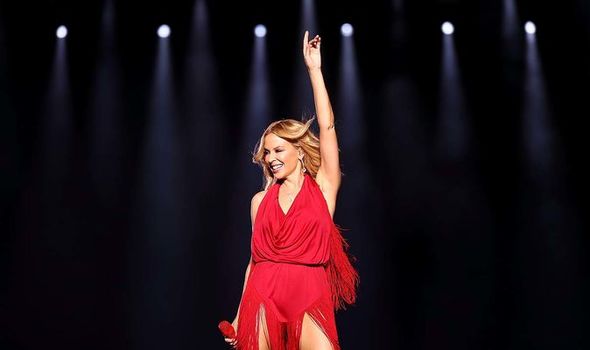 In the wings of the Royal Albert Hall, Kylie Minogue, casually dressed in green tracksuit pants, a purple T-shirt and wearing no make-up, was having second, third and fourth thoughts about taking her turn at a one-off cultural evening called the Poetry Olympics. On stage, a white-haired old man with a long beard was reading verse in Braille. Kylie turned to the singer-songwriter Nick Cave, her creative Svengali, and whispered, “Nick, God’s on stage, how can we follow that?”

Eventually, it was her turn, and Cave literally had to push her on. Apprehensively, she stood in front of the microphone and began: “In my imagination…” It was the start of her hit, I Should Be So Lucky, and Kylie, with no musical accompaniment whatsoever, spoke the words to her famous first number one. It was daring, courageous and took the audience’s breath away.

She had been unbilled so her appearance was not greeted with 100 flashbulbs. It was July 1996 and Kylie had lived a couple of miles away from the iconic west London venue for more than six years. She had moved to the capital in the spring of 1990 when she was in a relationship with the lead singer of INXS, Michael Hutchence.

For a while they were one of the most famous couples in the world, let alone London.

Michael had told Kylie to keep an “ego jacket” by the door and put it on whenever she left her Fulham flat and wanted to be Kylie Minogue, pop star. They looked fabulous whether they were attending the West End premiere of the movie Dick Tracy or catching the Hollywood star John Malkovich in the acclaimed production of Burn This.

When they turned up to see the play at the Lyric Theatre in Shaftesbury Avenue, the audience didn’t know whether to watch them or the performance. Eyewitnesses claimed Michael spent most of the performance twanging Kylie’s bra strap.

Kylie had dreamt of moving to London from her home city of Melbourne when she first became a well-known face on television playing tomboy Charlene in Neighbours.

During the mid-season break from filming in October 1987, she had flown around the world to meet the pop producer Pete Waterman, who, as one third of Stock, Aitken and Waterman, monopolised the music charts in the late Eighties.

She was curled up on a sofa in the reception of their studio near London Bridge waiting for a meeting before her car arrived to take her to Heathrow Airport. She didn’t know that Pete wasn’t even in London that day.

He was not one of the 15 million viewers who watched the soap, had forgotten all about Kylie and was relaxing at his Merseyside home.

Mike Stock rang Waterman to ask if a small Antipodean called Kylie Minogue rang any bells. “She’s in town,” said Waterman, helpfully, only to be told she was actually sat in his reception waiting to record something. Waterman replied: “She should be so lucky” – a story that became part of the Kylie legend, especially as they wrote her first UK hit by fax in half an hour before ushering her into the studio to record a vocal there and then.

This ramshackle occasion was not the first time that Kylie had been to the UK. She had first made the trip in 1980, aged 12, with her parents and younger siblings, Brendan and Dannii, who would later find fame herself and become a regular in Britain, to see the sights of London and to visit family in Wales.

One of the lesser-known facts about Kylie is that she is half Welsh; her mother Carol Ann Jones is from the former coal mining town of Maesteg, nestled in the Valleys between Swansea and Bridgend. She had emigrated to Australia to start a new life with her mum and dad when she was 10.

Even when she was one of the most famous women in the world, Kylie would slip down the motorway to visit her Welsh cousins or her great uncle, Dennis Riddiford, a retired carpenter in Maesteg. He died in 2010 and had always been discreet about his famous relation, mainly to stop kids singing I Should Be So Lucky outside his front gate.

Kylie is one of those stars who barely looks recognisable when she is not dressed to kill as a show-stopping celebrity. That was one of the reasons she loved London so much, even after her devastating break from Hutchence after fewer than two years together. If she had put on her “ego jacket” then she was likely to be seen conducting official interviews at Soho House or dancing at a gay club where she was treated reverentially as one of the great icons of the age.

It didn’t always work for her. On one occasion she went with Waterman to Peter Stringfellow’s now defunct Hippodrome nightclub off Leicester Square.

It turned out to be an unhappy night when a drunken group of girls started calling her names and jostling her. One allegedly spat on her as she sat down. Without saying a word, Kylie calmly got up and was ushered out. She learnt a valuable lesson that night – nobody cool ever went to the Hippodrome.

Mostly she preferred to hang out locally at the Chelsea Farmers Market or the Portobello Café, the coffee house in Notting Hill that Nick Cave owned in partnership with Hutchence. Occasionally, a paparazzo might intrude into this private world. On one occasion she was ambushed outside her home, leaving one morning with a handsome dancer.

An article duly appeared in the papers that offered a rare glimpse of someone who suffered from spots and could not be bothered to do her hair when she was going out for the first coffee of the day.

But why on earth should she be Kylie Minogue 24 hours a day?

She was in London in 1997 when she received the awful early morning phone call that Michael Hutchence had been found dead in a Sydney hotel room.

Her creative director William Baker, who she had met when he worked in designer Vivienne Westwood’s Chelsea store, said: “Kylie felt her world had crumbled under her feet.”

She spent the day behind locked doors. She was due to sing that night at G-A-Y in Charing Cross and decided not to let her ever faithful audience down by cancelling.

Over the years, her friends and lovers in London have remained discreet about their relationship with Kylie. The notable exception was a former male model turned photographer, James Gooding, who sold his story to the News of the World.

He painted a picture of their life in London that made them resemble Darby and Joan. After coffee and croissants at his flat in Shoreditch, east London, they would wander around Brick Lane market buying old records and flowers. Then they would go home where James would cook a Sunday roast – Kylie loved leg of lamb. After the meal they would settle down on the sofa and watch a Bridget Jones video.

At least her even more handsome next boyfriend, the French movie star Olivier Martinez, was the soul of discretion and support when Kylie was diagnosed with breast cancer in 2005 at the age of 37. For once she didn’t return to London – having treatment first in Australia and then in Paris where she rented a huge old apartment in St Germaine.

She finally reemerged in London when she crept on to the stage at G-A-Y with a bunch of flowers for her sister Dannii who was performing and they belted out Jump To The Beat, a top 10 single for the younger Minogue.

Kylie was awarded the OBE in 2008 and received it at Buckingham Palace from Prince Charles. She was back there again in June 2012 to sing at the Queen’s Diamond Jubilee Concert.

Backstage she helped Gary Barlow introduce the Queen to the performers.

This time she only had to pop across the road from the penthouse flat she bought the previous year in one of the swankiest blocks in London, One Hyde Park – the apartment is said to be worth a cool £17million. It was her home during lockdown when she turned the living room into a recording studio to lay down tracks for her last album, Disco, which made number one in the UK when it was released in November last year.

It’s too early to say whether she will sell up now she is settling back in Melbourne close to where her sister Dannii relocated and where her family, including parents Carol and Ron, still live. Her boyfriend of nearly four years, designer Paul Solomons, the Welsh-born creative director of British GQ, is reportedly not relocating and they will continue a long-distance relationship.

At least he is a good reason for her coming back to see us in London – perhaps when she does it would be fitting if we greeted her as Dame Kylie?