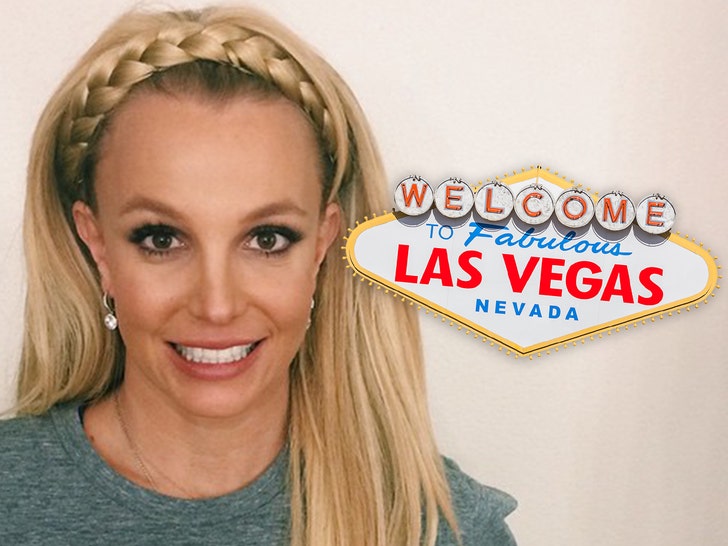 Britney Spears says she finally set foot in Las Vegas again after years of being away following the shuttering of her residency there — and her message is … this place is neat!

The pop star revealed Sunday that she’d returned to Sin City for the first time since 2017 — when she wrapped up her ‘Piece of Me’ show that had run for 4 years … and which also served as the last time she publicly performed in town. 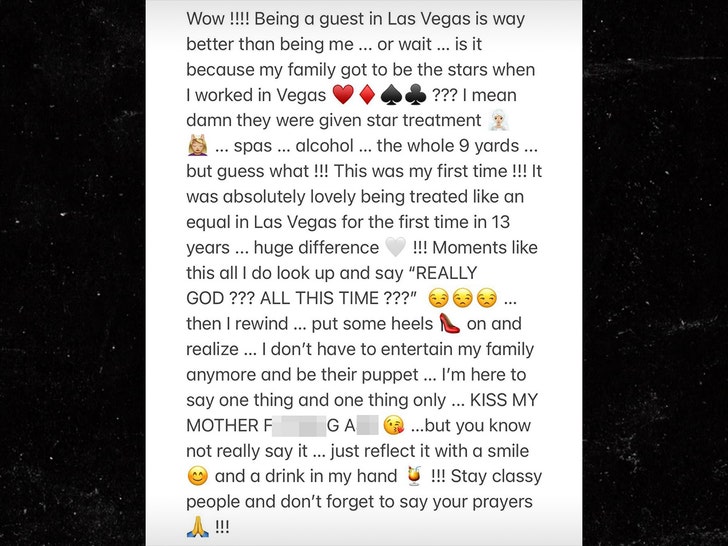 Now, coming back in a normal setting — where she’s just a regular person as opposed to a show pony — Britney says she loved it, but also resents her years of slaving away onstage.

In a lengthy IG post, Britney says her family used to get the VIP treatment because of the work she was doing there … while also suggesting she never got the luxury of that high life herself, but was instead subjected to harsh conditions and a grueling schedule.

BTW, there were hints she might’ve dropped in … because her fiancé, Sam Asghari, was posting a lot from his hotel at Resorts World Las Vegas — looks like they were both there for the UFC fight … and it would appear they got the red carpet rolled out too.

In that spirit, Britney writes, “It was absolutely lovely being treated like an equal in Las Vegas for the first time in 13 years … huge difference.” Brit goes on to say, “Moments like this all I do look up and say ‘REALLY GOD??? ALL THIS TIME???”

Britney goes on to slam her family yet again, saying she no longer has to be their performance puppet — and she wasn’t done with bashing them just yet either. 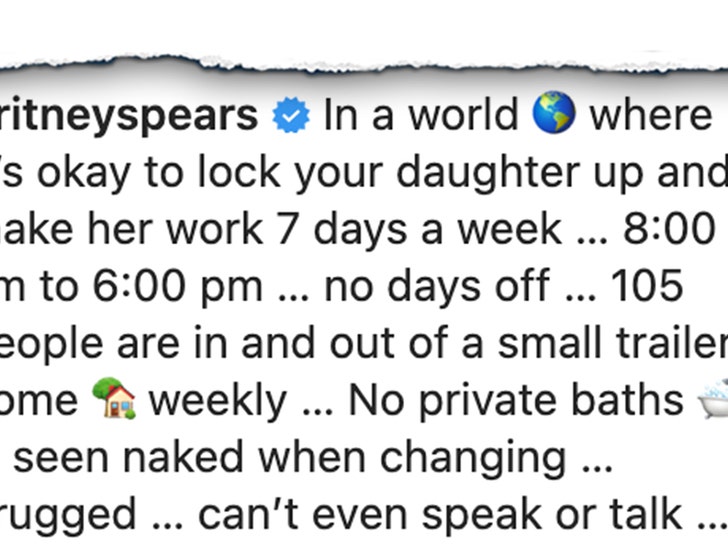 In a separate post, Britney detailed what sort of hours she was working — seemingly referring to her time in the entertainment industry at large … saying she was on the clock 7 days a week, on an 8 AM to 6 PM schedule, with little to no privacy.

She explains … “this happened to me for 4 months after I worked for my dad and my family for 13 f*****g years … I gave my all when I worked only to be literally thrown away … I was nothing more than a puppet to my family yet to the public I just performed on stage and did what I was told to do … but it was worse than that because it was accepted and approved by the people I loved the most.”

Britney goes on to say that she’s bringing all this up because she feels her parents have gotten away with what she deems criminal behavior, and vows to not stop the fight until they’re held accountable … even in the wake of her conservatorship ending.

She finishes by saying, “I’m not done … I want justice and won’t stop until something is done to those who harmed me … and YES I was harmed !!!! This is a message to all who have been threatened for their life … You are NOT ALONE !!!!”