Britney Spears is speaking out about life after her conservatorship.

Last week, the star saw her 13-year conservatorship terminated by a judge. On Tuesday evening, she shared a video hinting at what she plans to do with her time now that she can make her own decisions regarding her career.

“I’m here today to answer all of your guys’ questions and the first main question that you guys have been asking me is what am I going to do now that the conservatorship is over with,” she began in a video message.

The 39-year-old star said that 13 years was “a really long time to be in a situation you don’t want to be in” and said that she’s “grateful” for each new day. She rattled off a few luxuries new to her life such as having “the keys to my car” and “seeing cash for the first time.”

“I’m not here to be a victim,” Spears continued. “I lived with victims my whole life as a child. That’s why I got out of my house and I worked for 20 years and worked my a– off.”

She added that she’s now “here to be an advocate for people with real disabilities and real illnesses.”

“I’m a very strong woman, so I can only imagine what the system has done to those people,” she continued. “So hopefully my story will make an impact and make some changes in the corrupt system.”

She also took a moment to thank the #FreeBritney movement for helping her when her “voice was muted and threatened for so long.”

“I wasn’t able to speak up or say anything,” the “Toxic” singer recalled. “Because of you guys and the awareness of knowing what was going on and delivering that news to the public for so long … Because of you, I honestly think you saved my life in a way. One hundred percent.”

Britney Spears hinted that she’d be working in advocacy for the sick and disabled now that her conservatorship is over.
(Steve Jennings/WireImage)

In the caption, Spears said she shared the video to offer a “hint” regarding her future and joked that she hoped to someday “set things square” in an interview with Oprah Winfrey. Reps for Winfrey did not immediately respond to Fox News’ request for comment.

She said she found it somewhat “embarrassing” to share the limitations she was faced with, but is mindblown over “how my family and the conservatorship were able to do what they did to me.”

“It was demoralizing and degrading!!!!” she wrote. “I’m not even mentioning all the bad things they did to me which they should all be in jail for … yes including my church going mother !!!!”

Spears said that while she is “used to” staying quiet to keep the peace, she won’t follow suit “this time.” 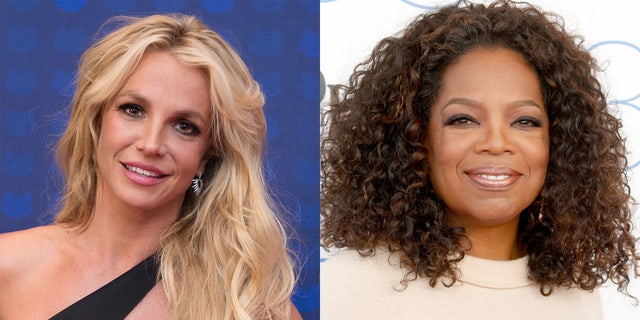 Britney Spears joked that she’d like to be interviewed by Oprah Winfrey.
(Getty Images)

“I have NOT FORGOTTEN and I hope they can look up tonight and know EXACTLY WHAT I MEAN !!!!” she concluded.

In the minutes following her post, Spears shared a pair of images of herself donning maroon lingerie, showing off her figure.