Cardi B left little to the imagination when she stepped out in a red carpet worthy, asymmetrical dress for a shopping trip with her husband.

Trust Cardi B to be dressed to the nines while on a casual shopping trip with her husband Offset. The “WAP” hitmaker put on a red carpet worthy display when she stepped out in a see-through, figure hugging dress by Pierre-Louis Auvray on January 22. The singer, 28, left little to the imagination in the red, sheer dress as she did some shopping in Beverly Hills. It featured an asymmetrical print which contoured her curves, and was made of a transparent material which revealed her black lingerie underneath. The dress was trimmed with a white knit fabric down the sides, along with a cut-off, short-sleeve turtleneck which was worn above the bodycon gown. 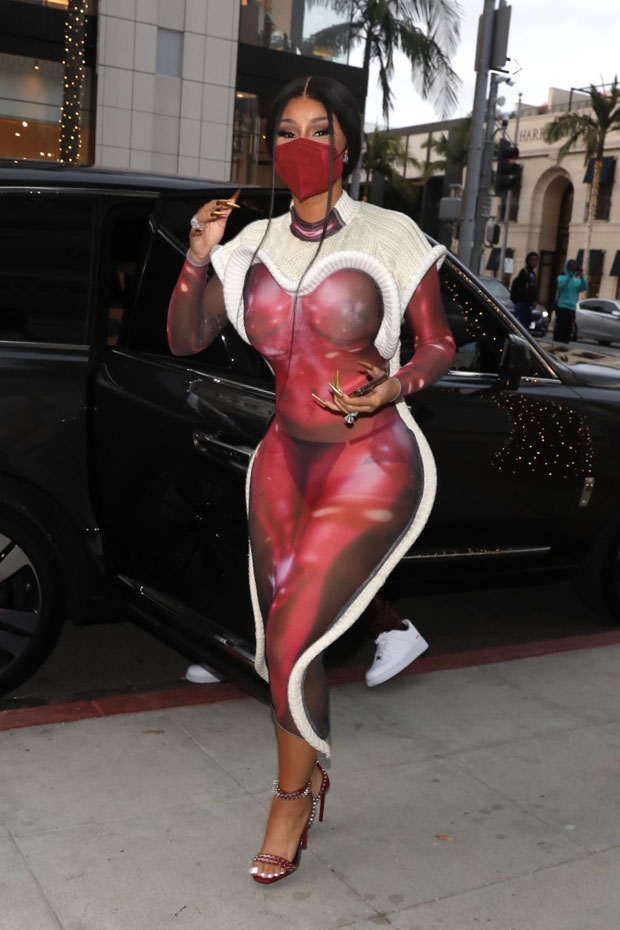 The “Bodak Yellow” singer completed the look with a towering pair of red strappy stilettos, a matching red face mask, and long pointy gold nails. She pulled her raven tresses out of her face, but left two strands hanging to frame her face. Meanwhile, her beau Offset cut a casual figure in a white polo, brown slacks, and crisp white sneakers, while also following COVID-19 guidelines with a cream colored face mask.

It comes just one week after the chart-topper revealed on Twitter how much her music videos allegedly cost. “Fun fact : Bodak yellow music video cost me 15 thousand dollars .I was in Dubai and I said ….I gotta fly picture (videographer) out here …BOOM BOOM BANG ! Ya know the rest,” she wrote. When one fan asked about some of the Grammy winner’s other music videos, she responded, “Money cost 400K ,Please me Cost 900K ,Wap Cost a M,” she said of three of her biggest hits.” 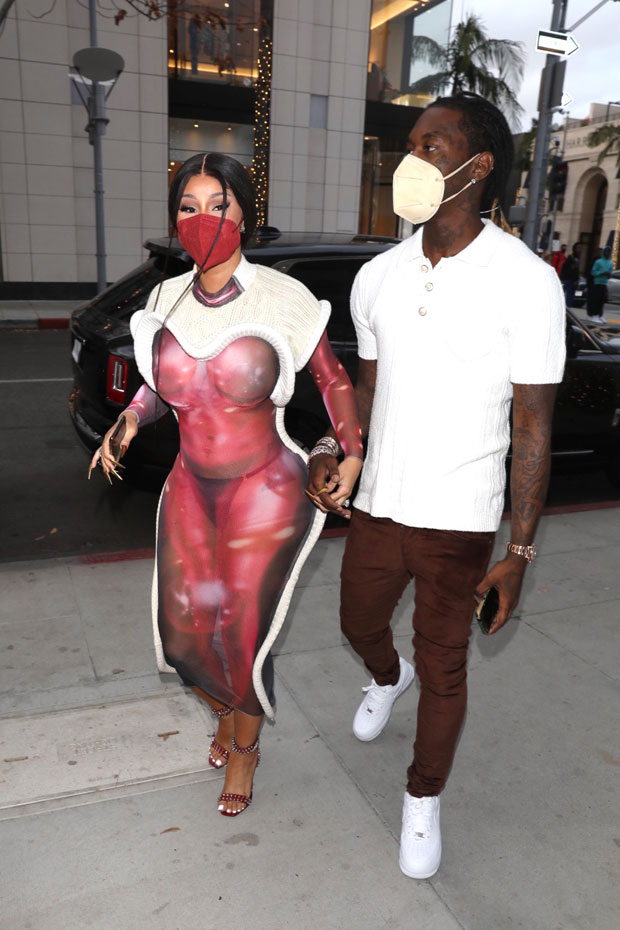 Although “WAP,” the rapper’s hit with Megan Thee Stallion, came with a hefty price tag, it made a lot of sense. Production value was high, as the clip showed Cardi and Megan inspecting the hallways of a sprawling mansion. Behind each door was a completely new room, and both girls had a few wardrobe changes. Of course, Megan and Cardi were also joined by some big names including Normani, Rosalía, Rubi Rose, Mulatto, Sukihana, and Kylie Jenner.