Carla Bruni, 54, displays her svelte physique in a sparkling lilac Celine gown as she attends the Triangle of Sadness premiere in Cannes

Carla Bruni put on a glittering display as she stepped out for the Triangle Of Sadness premiere at the Palais des Festivals on Saturday during Cannes Film Festival.

The Italian-French singer and former French first lady, 54, made sure all eyes were on her as she stunned in a sequinned lilac strapped gown on the red carpet.

She accessorised her sparkling gown, from Celine by Hedi Slimane, with a statement pink and blue jewelled necklace and a chunky silver bangle.

Sparkling: Carla Bruni put on a glittering display as she stepped out for the Triangle Of Sadness screening at the Palais des Festivals on Saturday during Cannes Film Festival

Carla kept her essentials in a silver clutch bag as she arrived for the screening of Swedish director Ruben Östlund’s latest film.

The model, who is married to former French president and disgraced politician Nicolas Sarkozy, wore her brunette locks in a straight fashion.

She accentuated her age-defying looks with a glamorous touch of make-up, including a smokey-eye palette, as she struck a series of poses on the red carpet.

Director Ruben Östlund is one of the new Cannes masters and has returned this year with Triangle of Sadness, which stars Harris Dickinson, Charlbi Dean and Woody Harrelson.

Wow! The Italian-French singer, 54, made sure all eyes were on her on the red carpet as she stunned in a sequinned lilac strapped gown

Jewels: She accessorised her sparkling attire with a statement pink and blue jewelled necklace and a chunky silver bangle 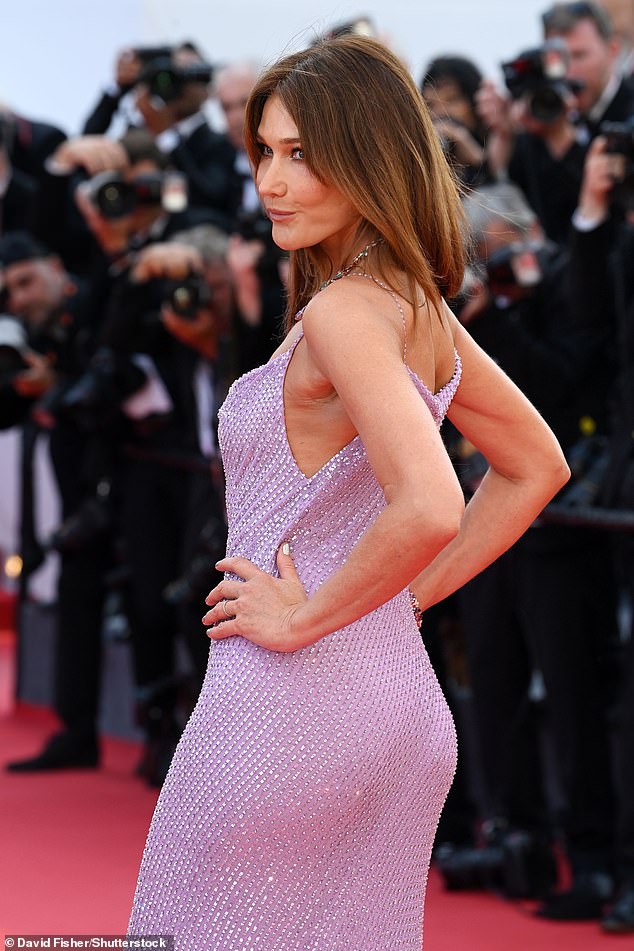 Wow! She displayed her svelte physique in her sparkling lilac gown

The dark comedy centres on a fashion model celebrity couple (Dickinson and Dean) who are invited on a luxury cruise for the super-rich.

After Cannes was entirely cancelled in 2020 and held under strict health protocols in 2021, the red carpet returned in all its glamour on Tuesday night for the Opening Ceremony.

The film chosen to open the festival was Final Cut, a comedy love letter to filmmaking and Z-list zombie movies from the team behind the award-winning The Artist.

There is set to be an array of TikTok stars taking to the red carpet this year after organisers sought to refresh their image by partnering with the video streaming platform, which is sponsoring an award for short films. 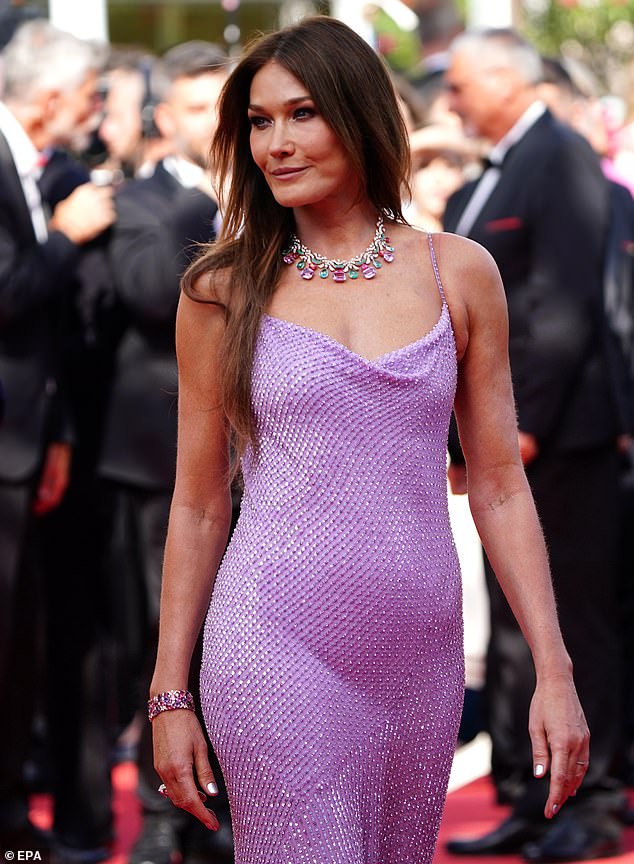 Stunning: Carla kept her essentials in a silver clutch bag as she arrived for the screening of Swedish director Ruben Östlund’s latest film

Sequinned: Along with her dazzling ensemble, she gave herself a few extra inches in a pair of silver strapped heels 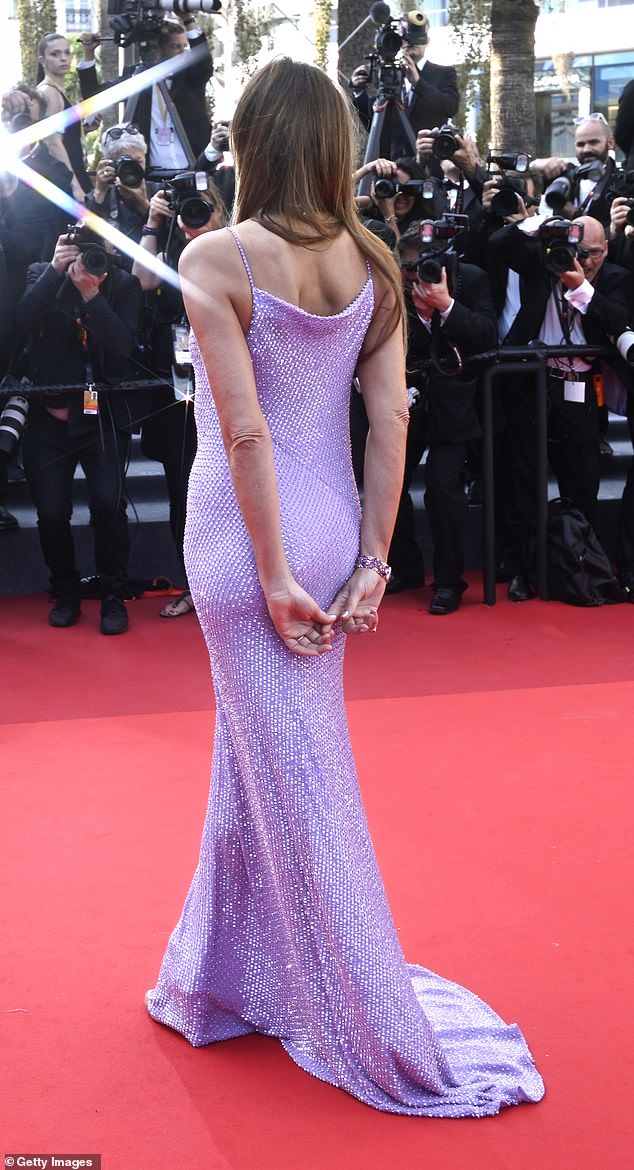 Beauty: The model, who is married to former French president Nicolas Sarkozy, wore her brunette tresses in a straight fashion cascading down her back 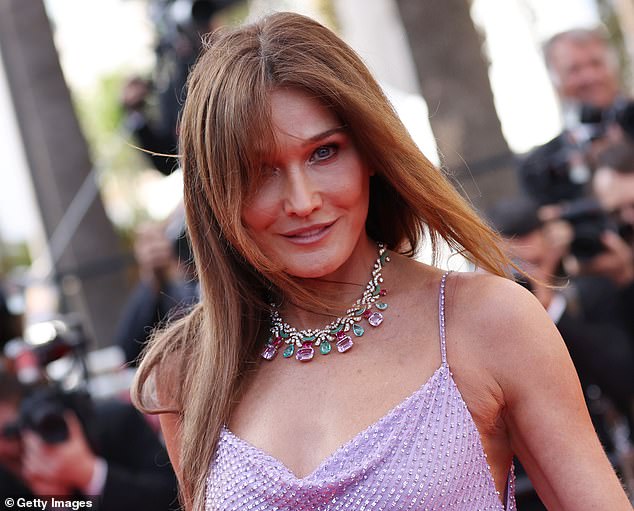 Posing: The former model showed she has not forgotten how to work the camera as she captured attention on the red carpet

In total, some 35,000 film professionals are expected to attend the festival between May 17 and 28, hoping for a return to form for cinema’s most glamorous event after two years when it was hampered by Covid-19 restrictions.

One major exception is the absence of Russians, due to the impact of sanctions over the war in Ukraine and a ruling from the organisers that state-linked delegates are not welcome. China is also expected to have a limited presence due to its continuing Covid restrictions.

But otherwise the festival is keen to put the pandemic in the past, with no mandatory masks or health passes this year – and no restrictions to partying.

Film fans can get stuck into the usual feast of new releases and competition entries, braving the festival’s famously opinionated crowds, who are never shy about cheering and booing during screenings.

Triangle of Sadness: The dark comedy centres on a fashion model celebrity couple (Dickinson and Dean) who are invited on a luxury cruise for the super-rich 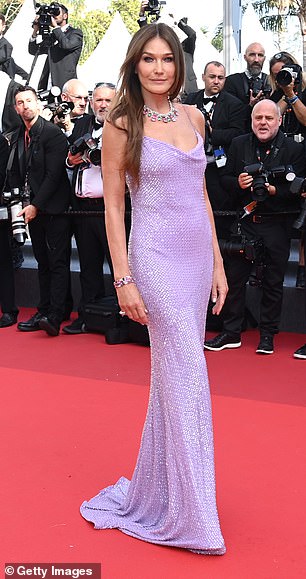 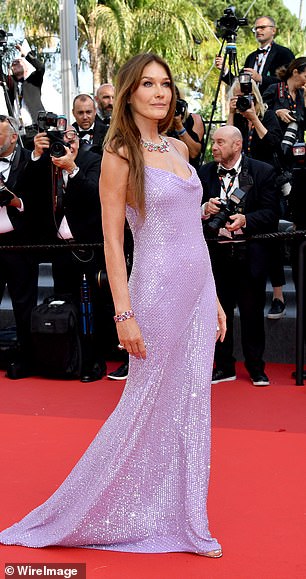 Age-defying: The mother-of-one, who is a regular at French events, kept her makeup minimal, highlighting her natural beauty 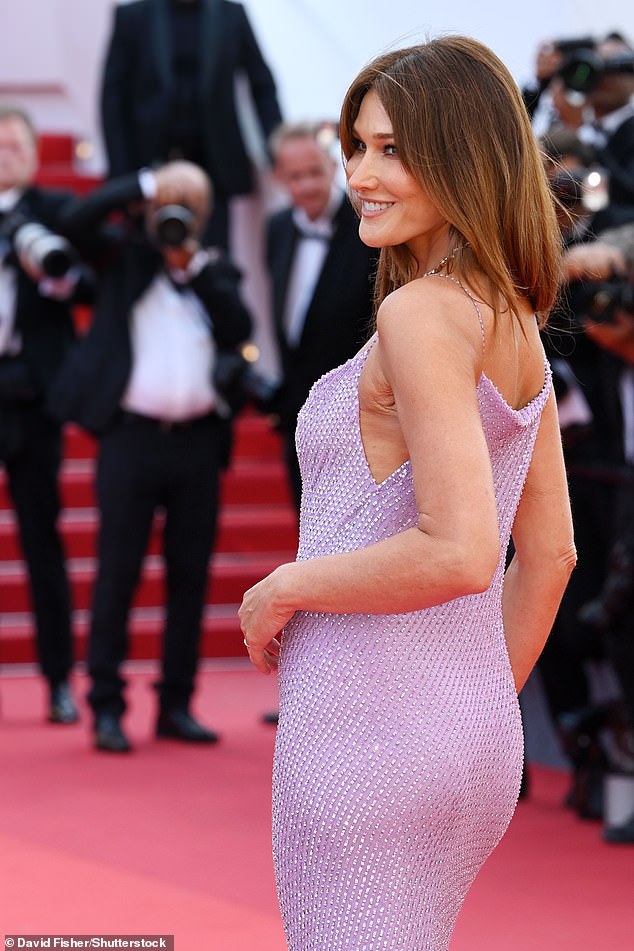 Amazing: Carla showed off her modelling credentials as she posed up a storm on the red carpet

Bombshell: She accentuated her age-defying looks with a glamorous touch of make-up, including a smokey eye palette 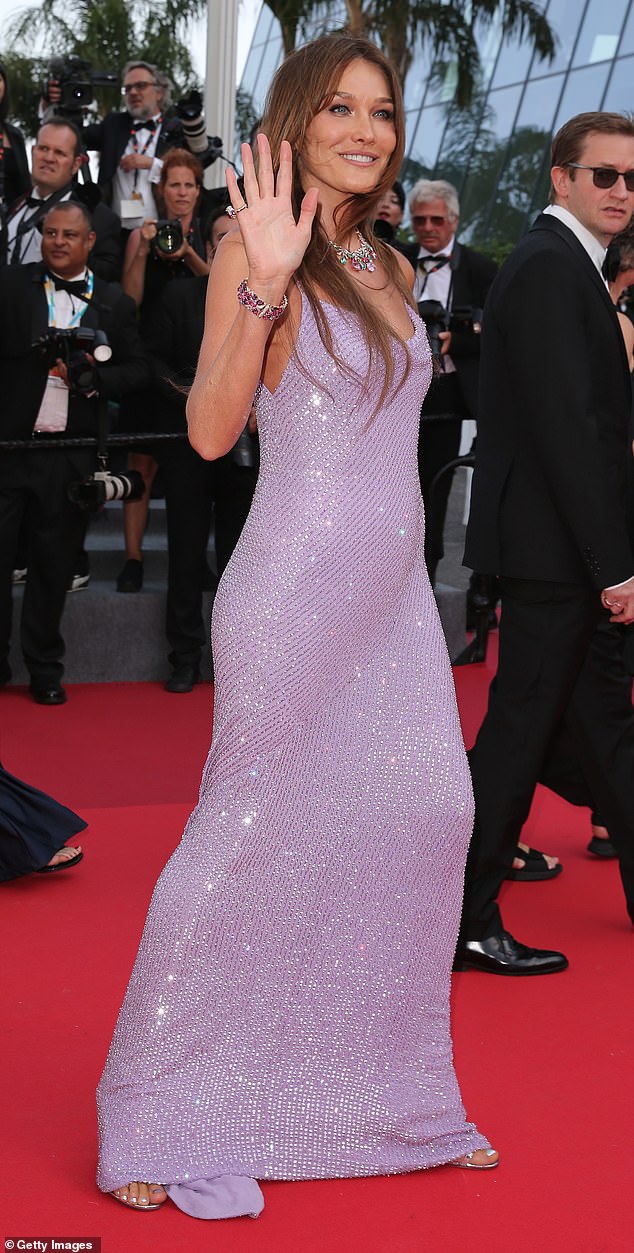 All smiles: Carla appeared to be in excellent spirits as she smiles and waved while strutting up the red carpet

There’s a lot of excitement around the Elvis Presley biopic from Australia’s Baz Luhrmann, hoping to recreate the buzz he generated when he brought the can-can to Cannes with Moulin Rouge! 20 years ago.

There are 21 films in the race for the Palme d’Or, including the latest body-horror fable from David Cronenberg, Crimes of the Future, starring Lea Seydoux and Kristen Stewart.

The Canadian director told IndieWire it is likely to cause walkouts ‘within the first five minutes’. 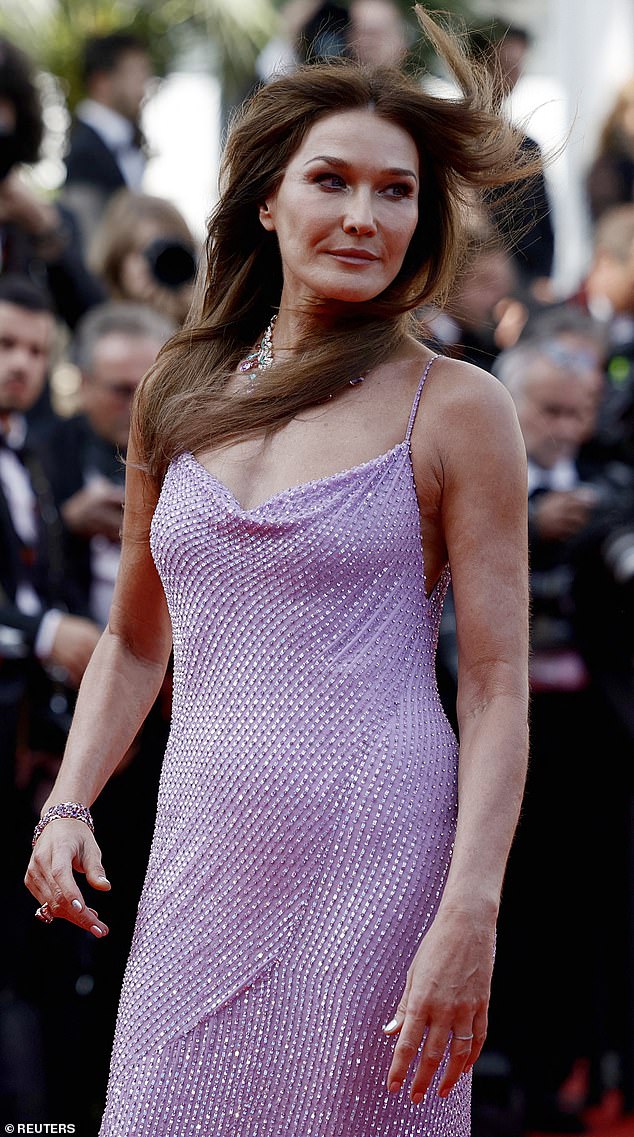 Incredible: Carla showed off her age-defying looks as she posed in the lilac gown, which shimmered in the sun

Glitzy: Carla’s gown was embellished with metallic stripes and sparkled as she walked the red carpet 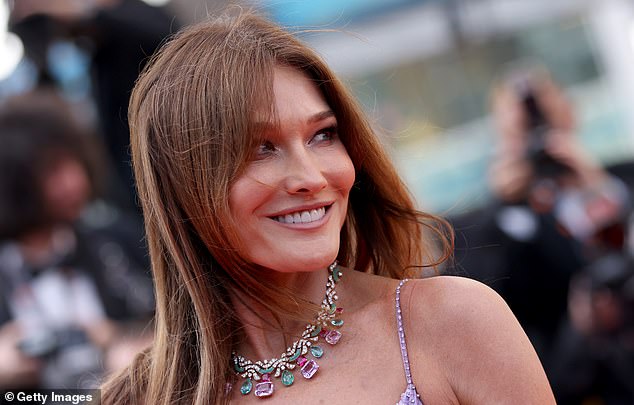 There are only five women directors in the competition, hoping to follow the success of last year’s winner, Titane, which made Julia Ducournau only the second female to win the Palme.

Alongside all the glitz, festival director Thierry Fremaux said Cannes aimed to keep the war in Ukraine in the spotlight.

During the opening ceremony, special attention was given to the war in Ukraine as Ukrainian President Volodymyr Zelensky addressed the gala opening ceremony as a surprise guest by video link from Kyiv.

‘In the end, hatred will disappear and dictators will die,’ he told the rapt audience which gave him a standing ovation.

The final film by Lithuanian director Mantas Kvedaravicius, who was killed by Russian forces in Ukraine last month, will get a special screening. 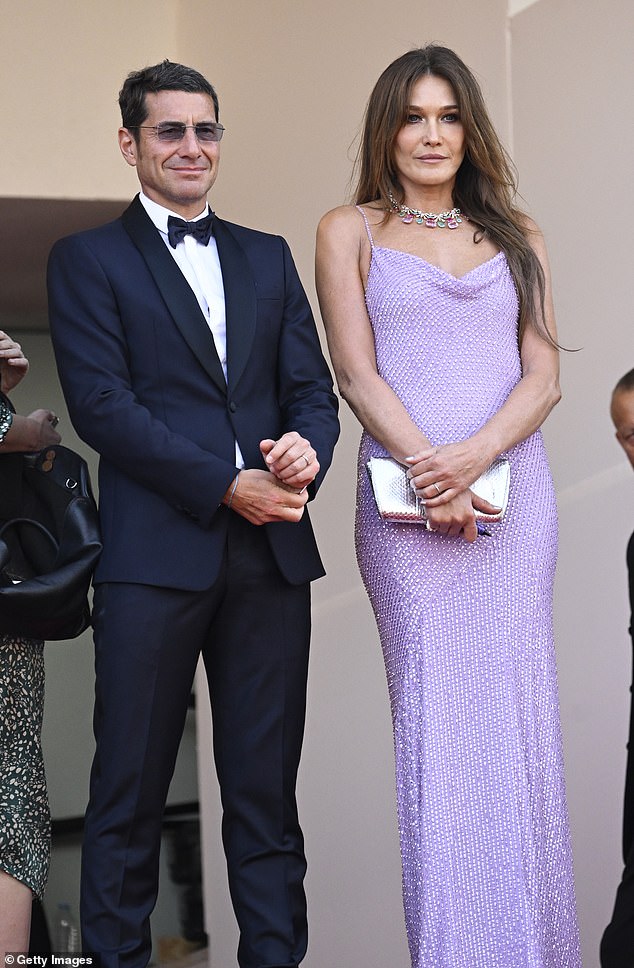 Gorgeous: Carla did not fail to live up to the glamorous ensembles often seen at Cannes Film Festival as she stepped out during the 75th instalment 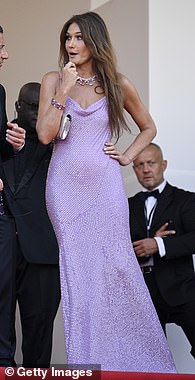 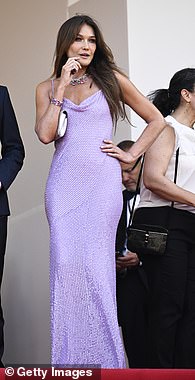 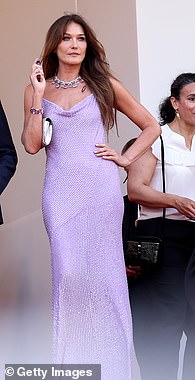 Carla, who was a model from 1987 to 1997 before starting her music career, showed off her incredible physique in the clinging gown 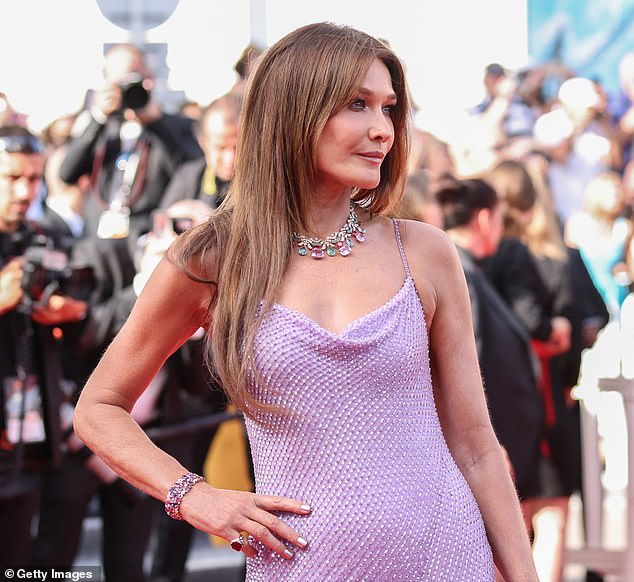 Marriage: Carla is married to disgraced politician Nicolas Sarkozy, who was France’s president from 2007 to 2012

He was shooting a follow-up to his celebrated documentary Mariupolis, about the conflict in Ukraine’s Donbas region, when he was reportedly captured and killed.

The main competition also includes exiled Russian Kirill Serebrennikov, who was unable to attend for his two previous nominations due to a politically charged conviction for embezzlement back home.

Fremaux said the festival wanted to lend a hand to ‘the Russians who take risks to resist’ while offering ‘absolute and non-negotiable support to the Ukrainian people’.

The world’s biggest film festival will conclude with the Closing Ceremony on May 28. 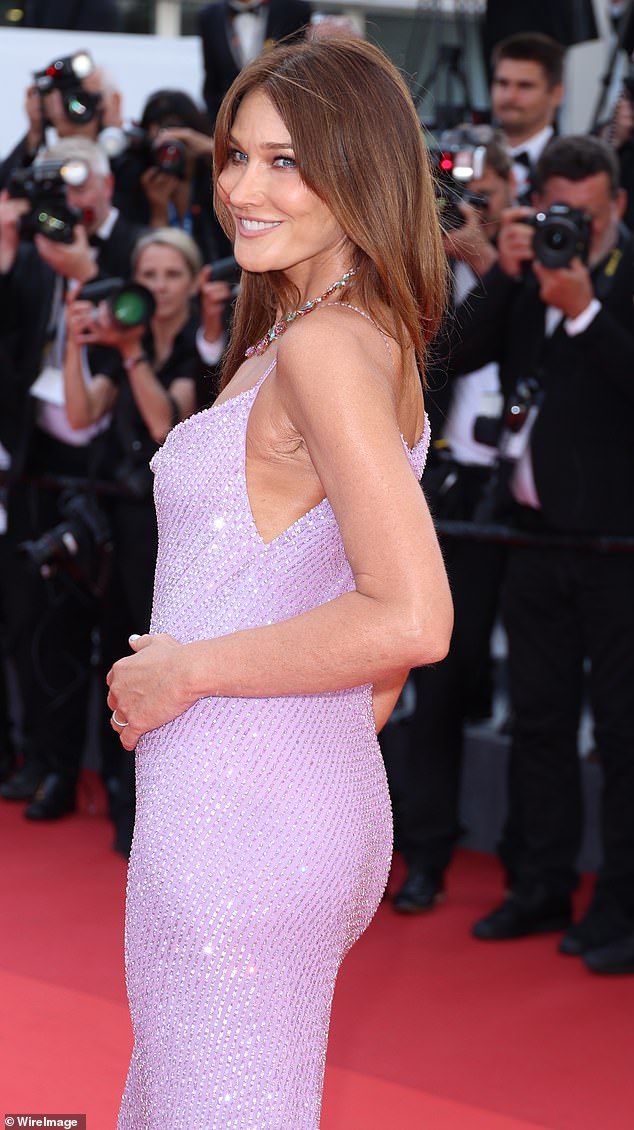 Glamour: After Cannes was entirely cancelled in 2020 and held under strict health protocols in 2021, the red carpet returned in all its glory on Tuesday night for the Opening Ceremony