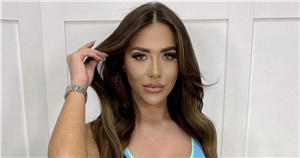 Chloe Brockett has revealed she received missed calls from her ex Jack Fincham after he was spotted getting cosy with Frankie Sims on a night out.

The Only Way Is Essex star Frankie, 25, was seen planting a kiss on the 29 year old Love Islander as they spent an evening at a bar together over the weekend.

Now, reality star Chloe has seemingly hit back at the ordeal between the two as she shared a screenshot of her recent phone log history, revealing two missed calls from Jack on Monday morning.

The first call was at 7:26 and he attempted to call her again at 7:48. Chloe, 20, posted a frog emoji and a cup of tea emoji over the snap, suggesting she's already moved on from the drama.

Chloe later hosted a Q&A session with her 302,000 followers, which saw one person ask her: "What's the story behind [frog emoji and cup of tea emoji]?"

She responded: "In all honestly the story is, me and jack haven't been seeing eachother in a month.. I just found it strange how he was out with her and then tried calling me.. that was it.

"No bad feeling here," she added, followed by a woman shrugging emoji.

During their night out, Frankie seemed to be enjoying dinner with her sisters Chloe, 38, and Demi , 25, before Jack joined them.

The star shared sweet footage of herself and Jack with her 300,000 Instagram followers.

Frankie, who wore a cropped teddy bear top, could be seen raising her cocktail to the camera, before snuggling into Jack who sweetly kissed her cheek.

Looking over the moon with his affectionate move, Jack, who looked smart in a black shirt, then beamed to the camera: “Cheers to a happy life!”

The pair then seemed to retreat to a quieter spot to enjoy a cuddle, where Frankie wrapped her arms around Jack’s neck as he grinned to the camera.

The pair recently reconciled, however, after Harry's messages to Chloe resulted in a massive showdown in 2020.