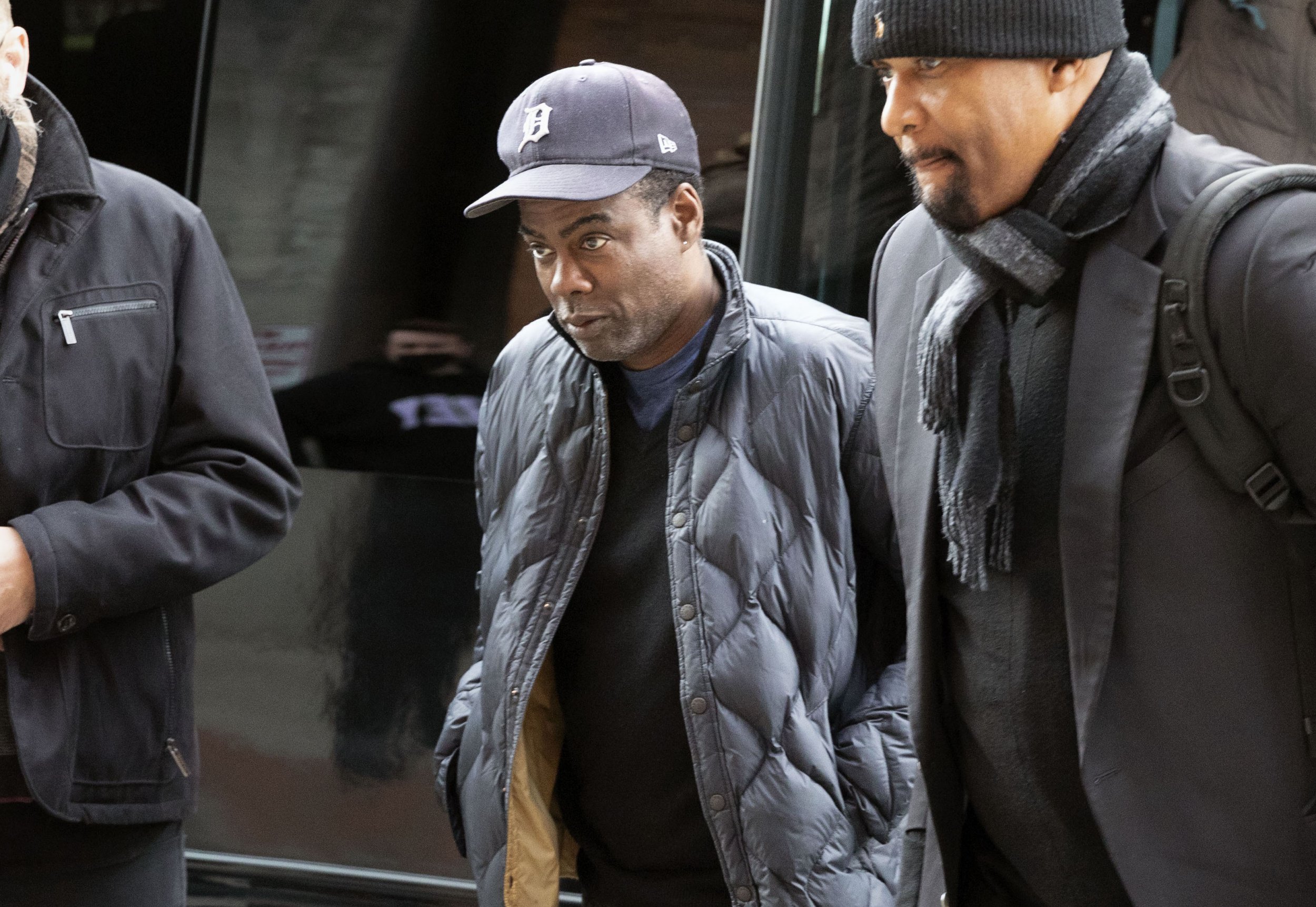 Chris Rock kept his head down as he made his way into Wilbur Theater in Boston, ahead of his comedy show.

The comedian will be performing publicly for the first time since he was slapped by Will Smith on stage at the Oscars, in shocking scenes.

He has yet to speak on the incident, and it is not known if he will refer to what happened in his routine.

In new pictures, he could be seen surrounded by people while walking into the venue, keeping a low profile in a blue baseball cap.

The Everybody Hates Chris star opted for a black jumper and grey trousers for the appearance, covering up with a dark grey jacket.

In now infamous scenes, Chris made a joke about Jada Pinkett Smith’s hair while presenting an award at the ceremony, asking her about ‘GI Jane 2’.

The Scream 2 actress, who suffers from alopecia, was visibly unimpressed by the quip, with Will confronting him on stage.

After the slap, he returned to his seat, yelling: ‘Keep my wife’s name out of your f**king mouth,’ from the audience.

Will, who was handed the best actor gong for King Richard, later apologized for his behaviour in a lengthy statement on Instagram.

However, speaking of the incident, Oscars host Wanda Sykes branded his actions ‘sickening’ and said that she is still ‘traumatized’.

Appearing on the Ellen Show, Wanda – who presented the awards with Regina Hall and Amy Schumer – began: ‘I just felt so awful for my friend Chris. It was sickening. I physically felt ill and I’m still a little traumatized by it.

’And for them to let him [Will] stay in that room and enjoy the rest of the show and accept his award, I was like, “How gross is this? This is just the wrong message”.

‘If you assault somebody, you get escorted out the building and that’s it. But for them to let him continue, I thought it was gross.’

Speaking of Will’s Instagram apology to Chris, she called for one of her own, and her fellow Oscars hosts: ‘I know he apologized to Chris but we were the hosts, right? This is our house, we’re inviting you in, we’re hosts, we’re gonna take care of y’all tonight and make sure you have a good time.

‘And no one has apologized to us. We worked really hard to put that show together. Like the industry itself, I’m like, “What the hell is this?”’

Elsewhere in the chat, Wanda revealed that she bumped into Chris after the ceremony and shared that he was full of sorrow that the night had been overshadowed by the slap.

‘I hope he doesn’t mind me saying this, but I saw Chris at Guy [Oseary]’s party,’ she added. ‘As soon as I walked up to him, the first thing he said is, “I’m so sorry.” I was like, “Why are you apologizing?”

‘He was like, “It was supposed to be your night. You and Amy and Regina were doing such a great job. I’m so sorry this is now gonna be about this”. Because that’s who Chris is.’