Chrissy Teigen gets hair extensions after cutting inches off her hair

Chrissy Teigen backpedals on her bob haircut and goes back to long locks using hair extensions: ‘That didn’t last!’

Chrissy Teigen recently made the bold move to chop off her flowing locks after seeing a photo of reality star Kourtney Kardashian rocking a similar look.

But the 35-year-old model appeared to regret the bold change as she enlisted celebrity stylist and extension expert Priscilla Valles to lengthen her tresses on Friday.

Wanting to take her fans along for the ride, Teigen used her Instagram Story to document the tedious installation process. 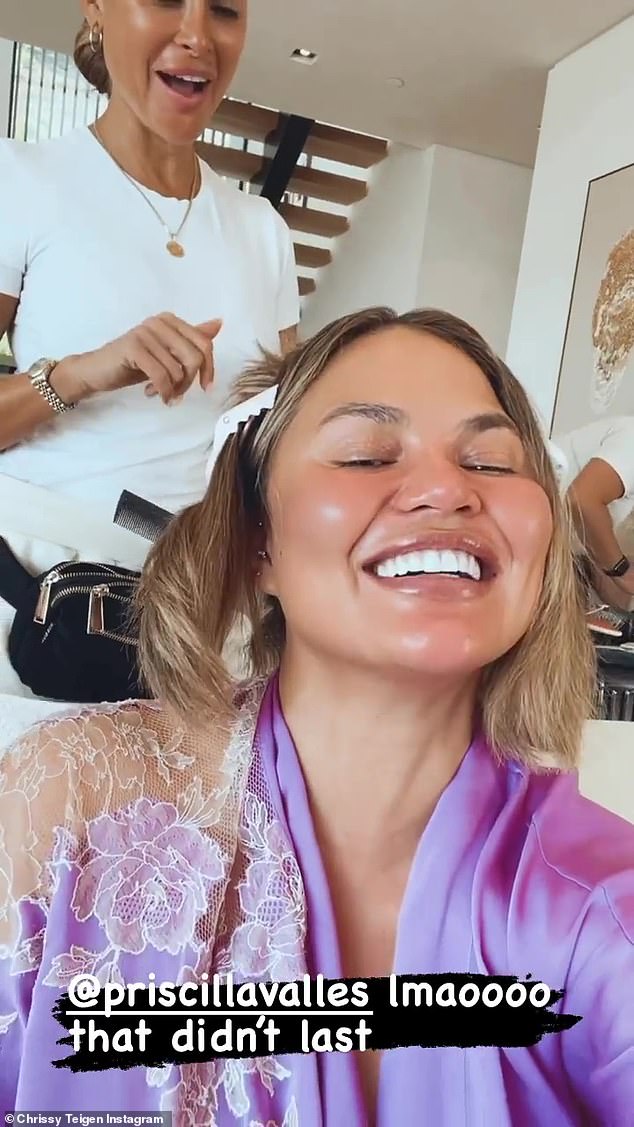 Didn’t last: Chrissy Teigen revealed she is having hair extensions installed just days after deciding to chop off her signature flowing strands

Chrissy wore a purple silk robe with white lace detailing and her hair was parted into sections with white clips as she remained seated in a chair.

They both said, ‘Bye-bye bob!’ and laughed. Chrissy then whined, ‘What’s wrong with me?!’ into the camera.

She wrote ‘That didn’t last!’ across the screen as a reference to her recent jaw-length chop. 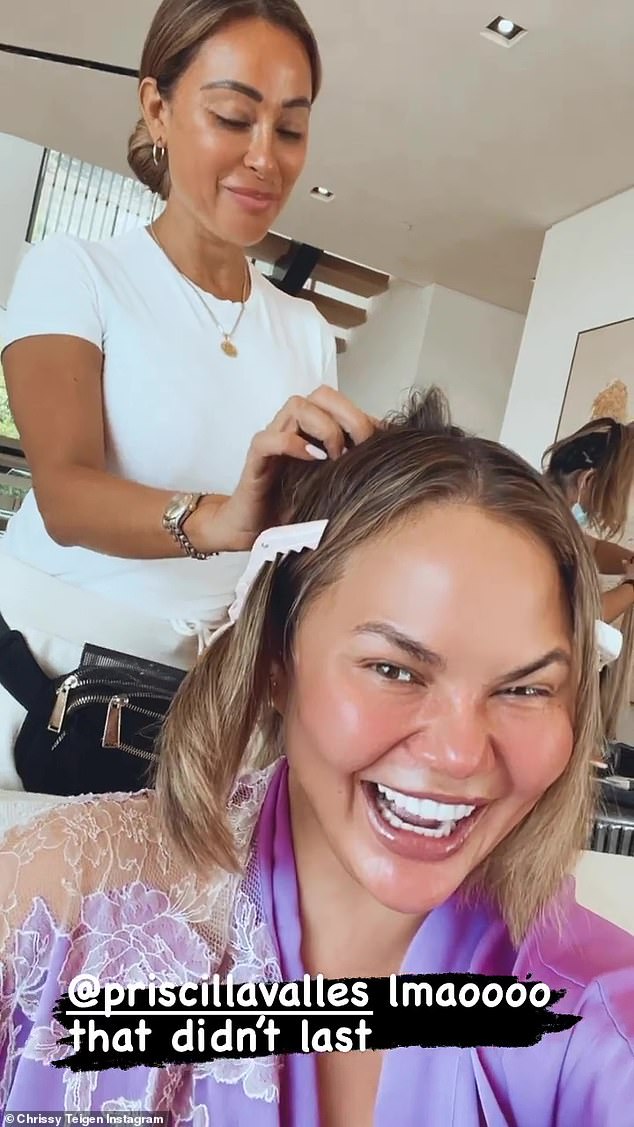 Earlier this week she shared a post showing her wet strands being cut with razor, writing to her followers, ‘You were very confused to learn my bob a few weeks ago wasn’t real, so here, for you! oh it feels so good to finally commit! thank you [Irinel de León],’ tagging the hairstylist who recently worked with Hailey Bieber.

Just two weeks before that the mother-of-two had shocked fans with a mock bob that looked extremely realistic.

In a video clip she ran her fingers through the blunt (faux) haircut and captioned it, ‘Cause Kourtney Kardashian looked so keeeeyute!’ She tagged the reality TV star and Kourt commented ‘Wow,’ with three cat heart eye emoji.

Now the Sports Illustrated cover star, who’s married to John Legend, is switching it up yet again. The final look hasn’t been revealed yet. 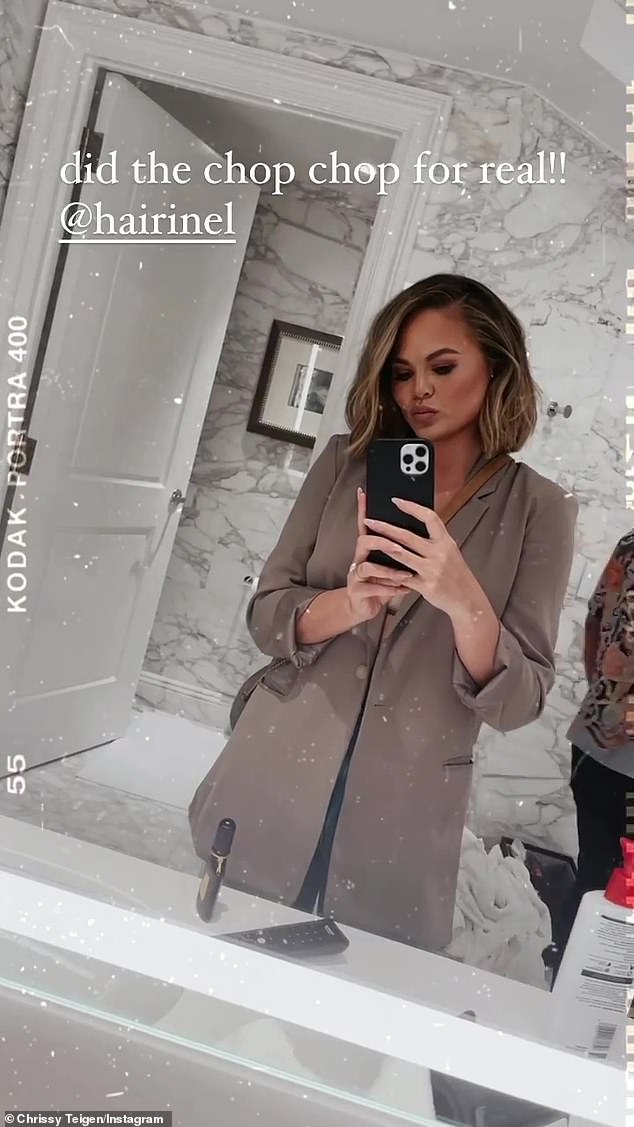 Bold: Teigen recently made the bold move to chop off her flowing locks after seeing a photo of reality star Kourtney Kardashian rocking a similar look

Teigen has been keeping a low profile in recent months after bullying tweets she sent to reality star Courtney Stodden a decade earlier resurfaced across the internet.

Courtney, who came out as nonbinary and uses they/them pronouns, revealed that Chrissy had urged them to take a ‘dirt nap,’ a euphemism for dying, in public tweets.

They also claimed that the model had urged them to kill themself in direct messages.

Mrs. Legend has returned to Instagram in recent weeks, though she has been silent on Twitter since June. 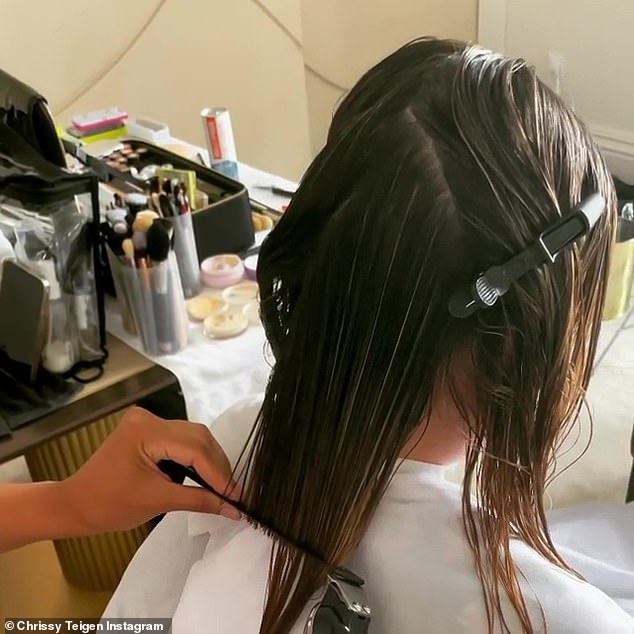 The real thing: Earlier this week she shared a post showing her wet strands being cut with razor 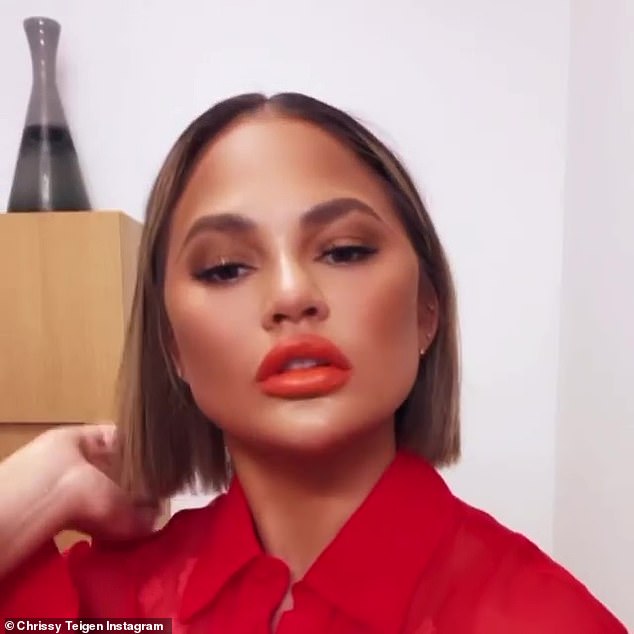 Faking it: In a video clip Chrissy ran her fingers through the blunt (faux) haircut and captioned it, ‘Cause Kourtney Kardashian looked so keeeeyute!’ 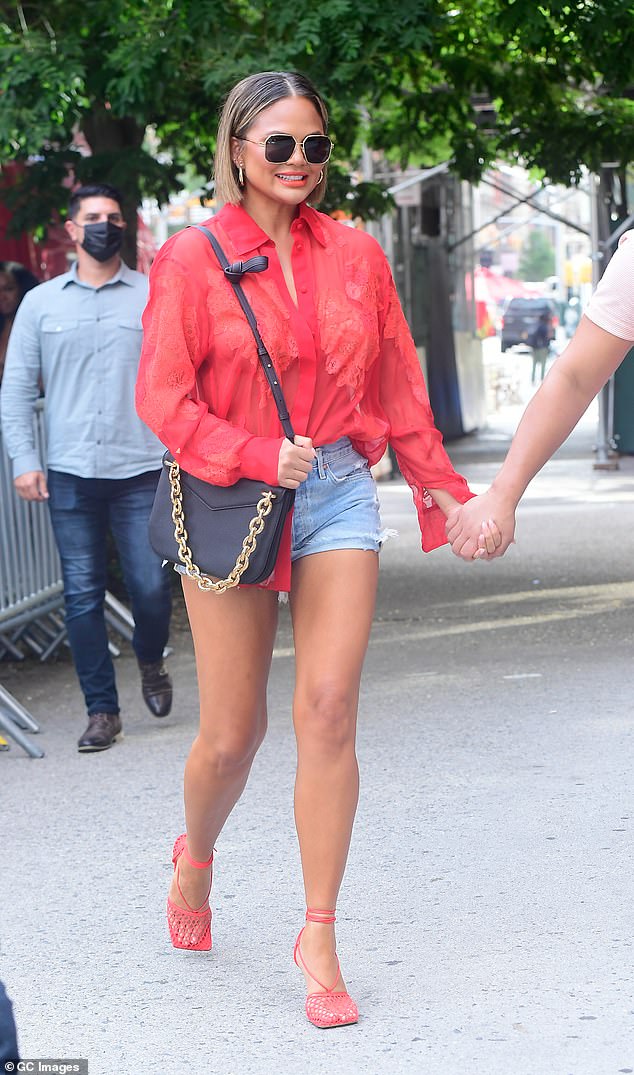 Convincing cut: In August the mother-of-two shocked fans with a mock bob that looked extremely realistic