Beyond any argument, what ITV does well is costume drama. It has done, ever since Upstairs, Downstairs half a century ago.

Frocks, bonnets, silks, toppers, snobbery and romance — these are its hallmarks.

Vanity Fair was fabulous. So is Victoria. Downton was good enough for Hollywood, and last Sunday Julian Fellowes’s new serial Belgravia got off to a cannonball start. Even when the channel trips over its crinolines and falls on its bustle, it does it with elan.

Beecham House looked glorious if you could ignore the dialogue. Sanditon might have worked if everyone had kept their breeches and bloomers on. 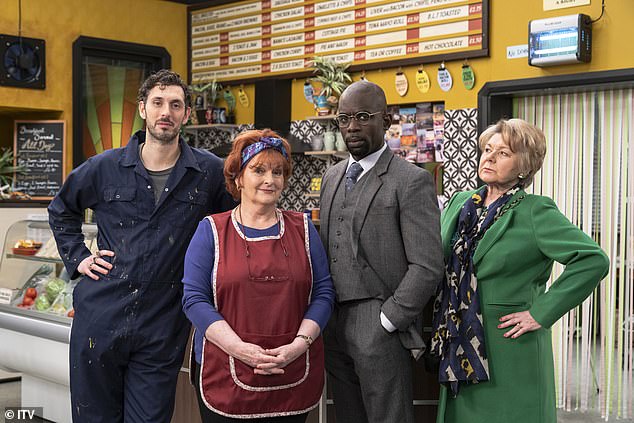 Kate & Koji is funny — and funny enough to make me snort with laughter, writes Christopher Stevens

But conventional wisdom holds that what ITV cannot do is comedy. The political weekly New Statesman even ran a headline last year: ‘Why is ITV so bad at sitcom?’

The head of studios, Kevin Lygo, couldn’t answer that question. He was flummoxed, announcing instead that the channel was axing its only half-hour comedy — Jack Dee’s Bad Move.

It’s years since Benidorm was at its acerbic best. Since then, flashes of brilliance such as Vicious with Ian McKellen and Derek Jacobi have been rarities.

Purists say ITV peaked with Rising Damp in the Seventies and has never matched it. So I had no great hopes for Kate & Koji (ITV), set in a seaside caff and starring Brenda Blethyn — she of the sour quips and wellington boots in Vera.

The press release said it’s a comedy about a family that adopts an asylum seeker. Oh gawd . . . hasn’t Channel 4 already done that idea to death with Home?

And then I watched it.

Kate & Koji is funny — and funny enough to make me snort with laughter. The script is well-honed by Andy Hamilton and Guy Jenkin, who wrote Outnumbered. But what raises this show far above the ordinary are the performances by Blethyn and Jimmy Akingbola as the title characters.

She’s a cantankerous old bag, he’s a pompous prig with a broad streak of self-pity. They loathe each other on sight. But Kate’s cafe customers love Koji, because he’s a doctor who can diagnose their ailments, without a six-week wait for a GP’s appointment.

‘There’s four things in life I hate,’ Kate seethes. ‘Scroungers, foreigners, doctors and posh people — and he’s all of them.’ Sitcom works best when the characters are one frayed nerve away from strangling each other.

Family heirloom of the night:

Teatime telly’s best-kept secret is out. The Repair Shop (BBC1), for years hidden away in the early evening, is now on primetime — and it’s a joy. Bet you never thought you’d get choked up over a peaked cap.

It’s better still when you throw in a bagful of pretentions with a sackload of suspicion and mean-mindedness.

Blethyn especially is relishing her character, as bigoted as Alf Garnett and as short-tempered as Victor Meldrew. She delivers her lines with such a snap, they could have your fingers off.

My first big laugh came when Koji was trying to explain why he wasn’t allowed to work. ‘Because you self-identify as a lazy person!’ Kate barked.

The studio audience roared. I bet they weren’t expecting to enjoy the show so much either.

It was a good night for new comedy, with the debut of Mae Martin’s Feel Good (C4), about a stand-up comic who falls in love with a crash for a girl in the front row — Call The Midwife’s Charlotte Ritchie.

The laughs were more strained, as though the lines had been rewritten so often that their originality had worn away. But the love affair is sweetly appealing, and there’s an undercurrent of heartbreak as we begin to realise that both women are hiding pain in their past.

Lisa Kudrow (Phoebe from Friends) had a cameo as Mae’s vain, self-obsessed mother who apparently can’t bear to see her daughter happy for a moment. More of her, please.