CHRISTOPHER STEVENS: The reality of murder – it's never the butler

Such a deadly simple idea, yet Taggart or Rebus might never have thought of it. Murder Case (BBC2) sat down with a team of hardened detectives and asked them what their job was like — how it felt to investigate a killing?

The crimes solved over the course of a year by Scotland’s Major Investigations Team were grimly mundane. In the first episode, we saw brutal CCTV of a drunk punched and kicked to death in a gutter outside Glasgow.

In the second, the deaths were equally squalid, their circumstances just as callous. A prostitute was found dead from an overdose, with clothes piled over her corpse by the junkie who robbed her flat.

A dismembered body was found in a wheelie bin, doused in aftershave to hide the stench of decomposition. 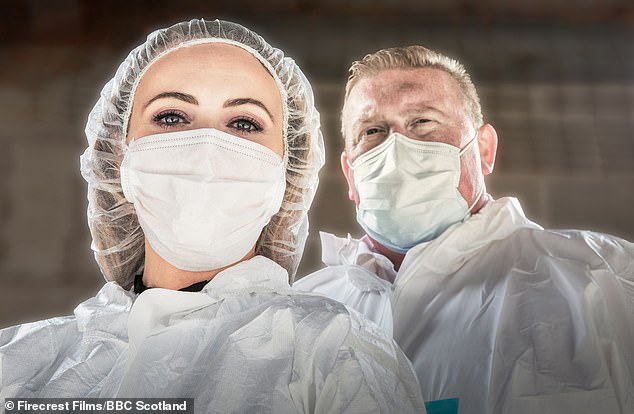 ‘It’s not even the first time I’ve dealt with a torso in the bin,’ grumbled DS Michael McCarron, bemoaning the fact that his life had none of the glamour crime show fans imagine. ‘It wouldn’t make much of a TV series if you had Colombo sifting through wheelie bins for a week.’

There were no cadavers artfully arranged in occult tableaux, no murders in numbered sequence to disguise the true motives of the killer — the sort of convoluted cases we see depicted every day in favourite series from The Bridge to Poirot.

I’m willing to bet that in their entire careers, these police veterans have never uncovered a case where the butler did it. The killer is always the violent boyfriend, the alcoholic room-mate, the drugged-up teen.

‘Without becoming blasé, you get pretty hardened,’ admitted DS McCarron. ‘It looks much more fun on the telly.’

Blatant namedrop of the night:

There’s an inane trend for every telly show to be prefixed by a celebrity name. The Yesterday channel takes this to an extreme with Adolf Hitler’s War. Maybe it was Der Fuhrer’s war, but it was Winston Churchill’s Victory.

But every detective, even the ones with 30 years on the force, spoke of the intense satisfaction that the job can give. The work they do is important and the pride they feel is hard-earned. On days when a murder is reported, said DS Andy McKay, supper will be a piece of toast in the kitchen at 1am.

These interviews drew candid admissions from the coppers that revealed their psychology as expertly as a crime novelist.

DS Julie Nedley said she first wanted to be a detective when she saw The Silence Of The Lambs: she felt a kinship with Clarice Starling, played by Jodie Foster. She used to think the trauma of the job didn’t affect her, until one night she woke from nightmares after a horrific stabbing.

‘What we do,’ said DC Gemma Lawrie with a certain dark pleasure, ‘it’s not something you want to tell your friends and family. It’s not nice.’

That’s how I’ve always felt about The Apprentice, which has been postponed this year by the pandemic but is reprised in a selection of gormless highlights under the misleading title, Best Bits (BBC1).

This compilation, comprised of celebrity editions for Comic Relief and Sport Relief, at least had the justification of showing how to earn hundreds of thousands of pounds for charity. Most of these candidates were far more competent than the usual idiots. Baroness Karren Brady haggled with the smug New Labour spin doctor Alastair Campbell and left him stitched up like a kipper in a sewing machine factory.

Cricketer Phil Tufnell showed how to sell tickets for a party: ‘Who’s gonna be there? Rod Stewart is coming,’ he lied, ‘with Penny Lancaster.’

But not everyone was so competent. Rupert Everett was lost without a script. ‘I can’t stand the camera,’ he bleated. ‘I’m like frozen. You be need dialogue for to be an actor.’

Yes, I see what you mean.