The UFC fighter dissed the ‘Tickets to my Downfall’ rapper, in an interview after their run-in at the MTV award show on Sunday night.

Shots fired! Conor McGregor, 33, called out Machine Gun Kelly, 31, in an interview with ET after the two nearly came to blows on the red carpet at the MTV Video Music Awards on Sunday September 12. The mixed martial arts fighter swore that he didn’t have any beef with the “bloody valentine” singer, but he still managed to work a verbal jab into his response about what exactly happened before the show started.

Decked out  in his pink suit with a black undershirt, Conor swore that “absolutely nothing” had really happened on the red carpet, and he only knew that MGK (whose real name is Colson Baker) and his girlfriend Megan Fox, 35, went to UFC fights together. “No scuffle at all! No, I don’t know the man,” he said. “I just showed up… I don’t even know the guy to be honest with you.”

Even though Conor was photographed with his arm out as if he was throwing a punch at MGK, the former UFC champion said he had no interest getting into a squabble with a musician, which is when he took a shot at the “Papercuts” singer. “I only fight real fighters —people that actually fight, you know what I mean? I certainly don’t fight little vanilla boy rappers. I don’t even know the guy.  I don’t know anything about him, except that he’s with Megan Fox,” he said. 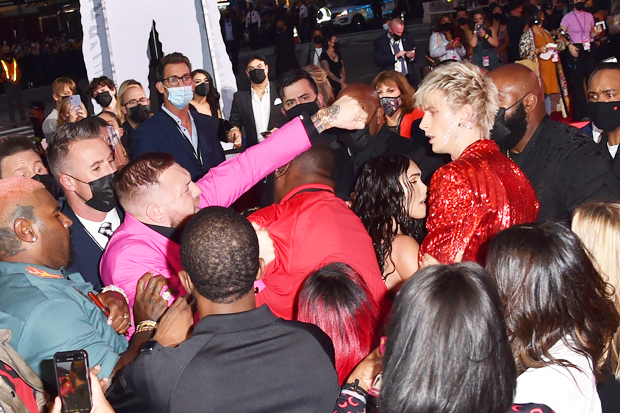 The fighter and singer allegedly got into it after MGK declined taking a picture with the Irishman. Conor then pushed the rapper, and security held the UFC star back, after he’d spilled his drink. MGK’s security allegedly pushed Conor back, via TMZ. Conor also didn’t reference the scuffle onstage, when he presented Justin Bieber with the Artist of the Year award.

Despite the near red carpet rumble, the VMAs were largely a celebratory affair for MGK. The rapper took home the Best Alternative award for his song “My Ex’s Best Friend,” which features Blackbear. He also performed his latest single “Papercuts,” with blink-182 drummer Travis Barker, after receiving a sweet introduction from Megan and Kourtney Kardashian, whom Travis is dating. The ladies called the pop-punk stars their “future baby daddies,” and all four went on a double date after the show.