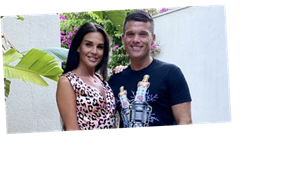 Danielle Lloyd has revealed she underwent an eye-lift surgery and a second lift on her jawline, which she kept secret from her husband Michael O’Neill.

Danielle, 37, has revealed her husband Michael was “furious” when she underwent the procedure, which she decided to do after seeing “gorgeous young girls” on Instagram.

The model, who recently showed off her body transformation after undergoing a 10 day challenge, opened up on her decision to undergo the procedure.

She admitted she has “worries” about turning 40 in a few years time and said: “I want to look my best, and this procedure prevents things like jowls and lines, so I thought, ‘Prevention is better than cure!’

“I know I'm a little bit obsessed but it makes me feel better.”

Danielle also explained how she kept the procedure hidden from Michael, but her husband and her eldest son Archie, 11, weren’t impressed when they discovered what she had undergone.

She explained to Closer magazine: “Michael just thought I was going out to get a beauty treatment, like getting my eyelashes done or something.”

Danielle added that Michael was “furious” and told her she was beautiful without the procedure, but Danielle said it has made her feel more confident.

The mum-of-four, who previously said her husband banned her from plastic surgery, then revealed how she had sat her son Archie down and explained how the procedure had made her feel “happier” and he understood.

Danielle is mum to Archie, Harry, 10, and eight year old George, who she shares with her ex-husband Jamie O’Hara.

She is also mum to four year old son Ronnie, who she shares with husband Michael.

It comes months after Danielle revealed her husband Michael had banned her from surgery after she unveiled the results of a nose job in December after jetting off to Turkey – when travel restrictions were not in place – for the op.

She said in January: “Surgery can be a slippery slope, and it can be really addictive. Michael has now put his foot down.”

Danielle had previously vowed against plastic surgery after a botched boob job in 2012.

She vowed against surgery after one her her implants burst open in the middle of the night.

Reliving the ordeal, Danielle previously explained: “Everything went well with the surgery, I was quite happy with them but then my breasts started to swell and swell, and literally they almost grew to the size of my head. They were disgusting.”

She added: “Then one day I woke up in a pool of gunky, bloody water. My left breast had exploded. It was such a scary experience, I was terrified.”