‘It has been heartbreaking’: Danielle Lloyd admits she was left ‘upset’ when Rebekah Vardy brought up her miscarriage in court as she breaks silence on ‘Wagatha Christie’ libel trial

Danielle Lloyd has admitted that she was left ‘heartbroken’ when Rebekah Vardy brought up her miscarriage in court as she broke her silence on the ‘Wagatha Christie’ libel trial.

The model, 38, said it brought up ‘really bad memories’ and left her ‘upset’ to hear the wife of Jamie Vardy, 40, spoke about her past miscarriage at the Royal Courts of Justice.

Last week, Rebekah and her agent were accused of plotting to leak information about Danielle’s miscarriage and honeymoon in the Maldives – claims which Rebekah has denied. 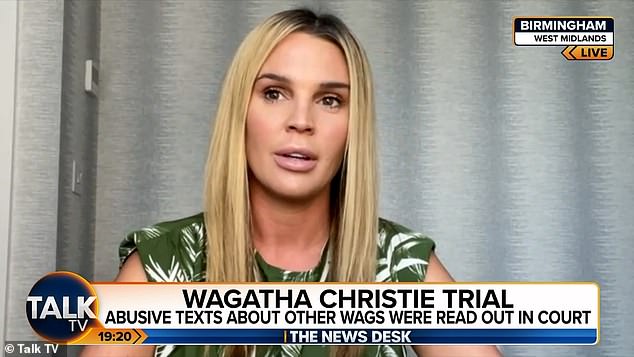 Upset: Danielle Lloyd has admitted that she was left ‘heartbroken’ when Rebekah Vardy brought up her miscarriage in court as she broke her silence on the ‘Wagatha Christie’ trial

Speaking to TalkTV’s The News Desk, the ex-wife of footballer Jamie O’Hara spoke about the incident as she said she was ‘distraught’ at the time of her miscarriage.

She said: ‘Honestly it’s really upset me, to go back on really bad memories.

‘One of the text messages was talking about a miscarriage I’d had in the past, and I just really was distraught at the time and obviously for that to be brought up again has just been heartbreaking for me.’

Danielle also showed her support for her pal Coleen Rooney amid the £3million libel trial but admitted she doesn’t think either Rebekah or the wife of Wayne will win due to the soaring legal costs. 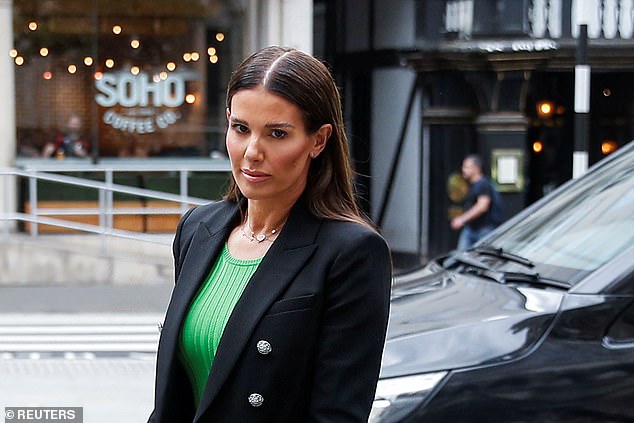 Court: While giving evidence last week, Rebekah denied she had wanted to leak information about Danielle when questioned about a text she had sent in August 2019

‘I don’t think we will actually get to the bottom of who leaked those stories, so whatever the outcome, obviously both girls can just get on with their lives. But obviously I am rooting for Coleen.’

Last week in court, Rebekah and her agent Caroline Watt were accused of plotting to leak information about Danielle’s miscarriage and honeymoon in the Maldives.

Rebekah was questioned by Coleen’s lawyer David Sherborne QC about a text message she had sent in August 2019 which referred to ‘leaking the Maldives stuff’.

Mr Sherborne claimed the messages showed she was trying to leak information about a pregnant woman, who was revealed to be Danielle.

The court heard Rebekah had a ‘spat on Instagram’ with Lloyd which led to ‘legal correspondence’ between the pair. Rebekah denied that she had wanted to leak information on Danielle due to a ‘public spat’.

She also denied leaking the stories and explained why she sent a message during the exchange saying: ‘She’s gone and done it now.’

Rebekah claimed her message referred to an interview Danielle had given to a magazine where she discussed going on honeymoon to the Maldives and her miscarriage.

On August 6, 2019, she had messaged her agent Caroline Watt about an unidentified woman, saying: ‘She’s gone and done it now leak the Maldives stuff x’.

An article which later appeared explained Danielle Lloyd had a miscarriage – there is no mention of the Maldives in that article, with the Maldives honeymoon reported on 11 April, 2019.

Rebekah claimed she had not leaked anything about Danielle and said the word ‘leak’ should mean ‘publish an article about her own miscarriage in Closer Magazine’.

‘It’s clear that she’s telling Ms Watt to leak private information about someone else, the Maldives stuff. One can only dread to think what it was.’