They sure made a pretty daughter! Danny DeVito, 77, and Rhea Perlman’s child Lucy DeVito, 39, is elegant in a halter dress as she attends The Patient premiere

Danny DeVito, 77, and 74-year-old Rhea Pearlman’s daughter Lucy was seen at The Patient premiere in Hollywood on Tuesday.

The 39-year-old looked elegant in a black and brown halter dress as she added cotton candy pink heels.

The brunette beauty has been following in the footsteps of her famous parents as she has worked as an actress for decades. 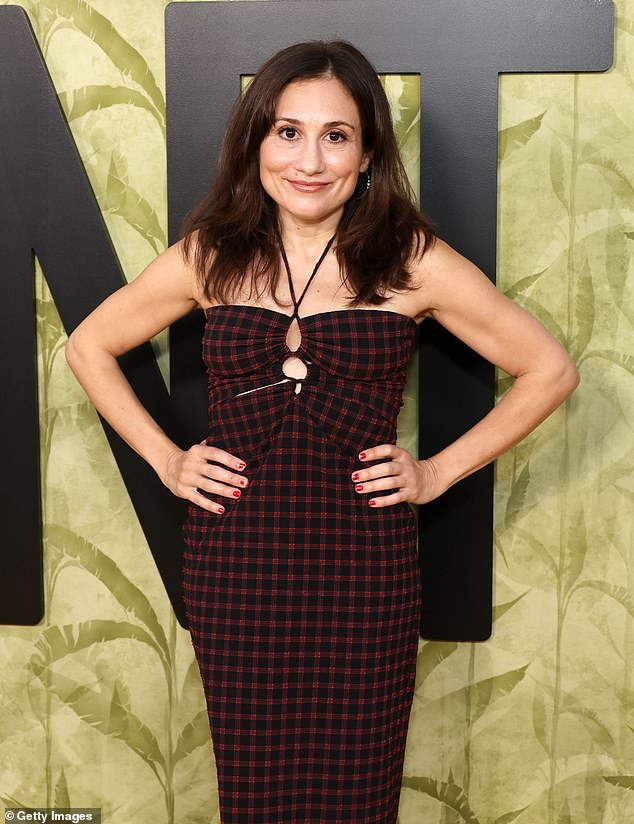 Glowing: Danny DeVito and Rhea Perlman’s daughter Lucy was seen at The Patient premiere in Hollywood on Tuesday 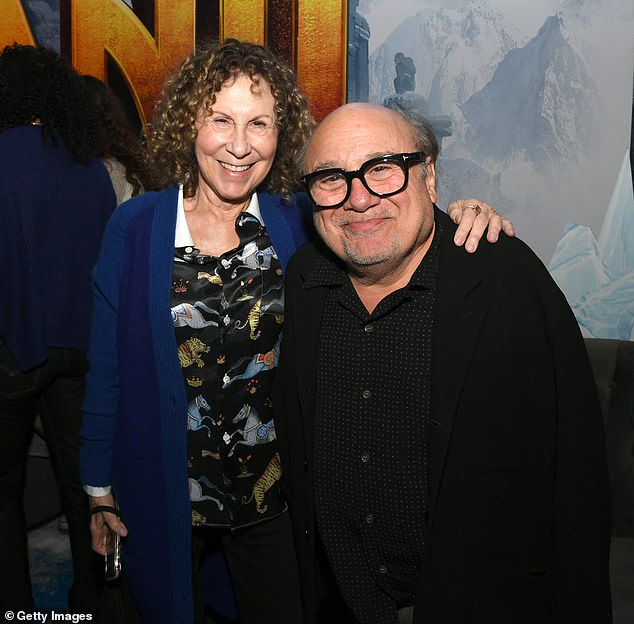 Her parents: Perlman (L) and DeVito, 77, pose at the after party for the premiere of 2019’s Jumanji: The Next Level which Lucy had a role in

Like mom and dad, the New York City native works as an actress and has already made over a dozen movies and appeared in several TV shows in addition to her theater work.

In 2007 she graduated from Brown University with a degree in theater and went on to star as Anne Frank in a 2008 production of Anne Frank at the Intiman Theatre in Seattle, Washington.

The next year she starred as La Piccola in the play The Miracle at Naples at the Huntington Theatre. 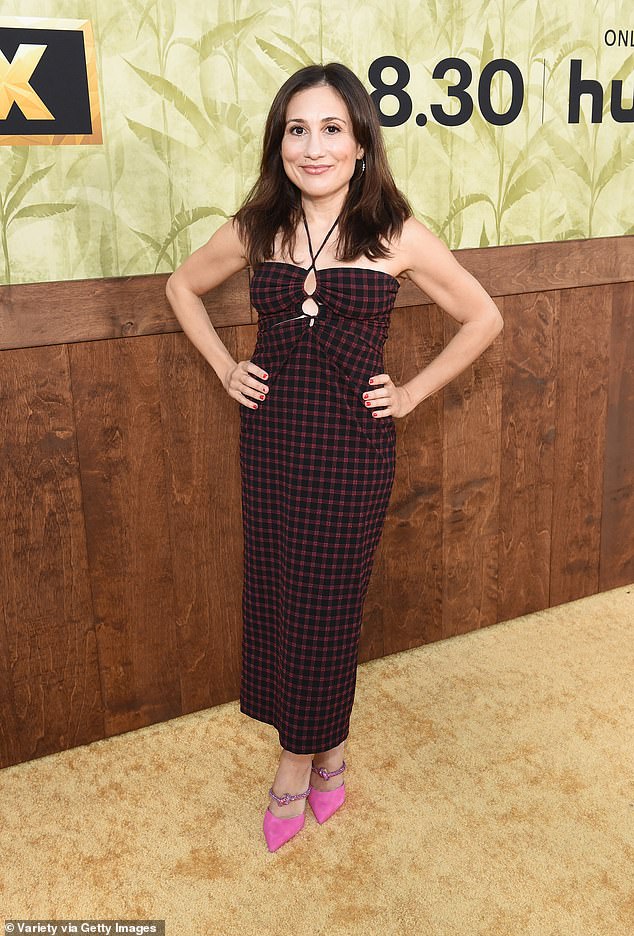 Fun kicks: The 39-year-old looked elegant in a black and brown halter dress as she added cotton candy pink heels 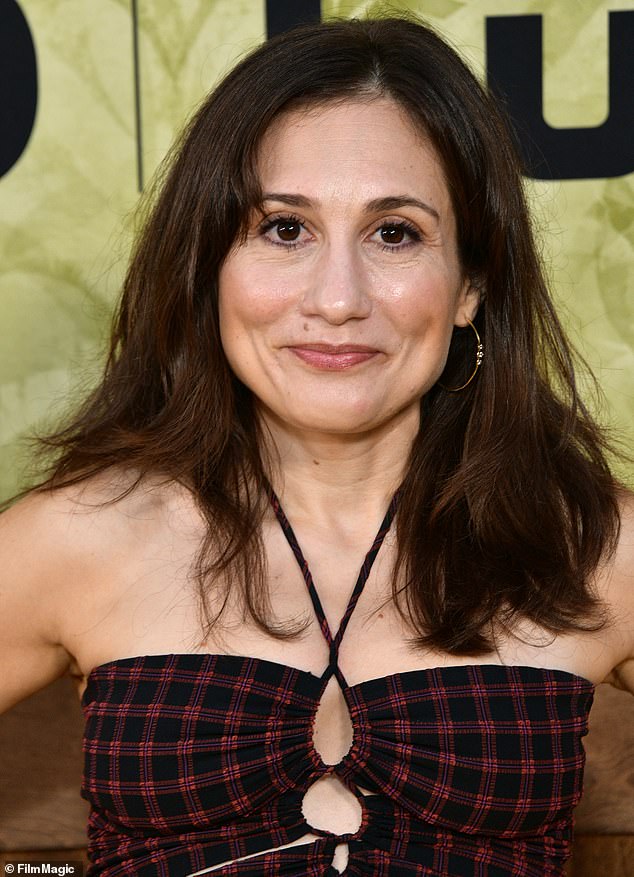 It runs in the family: The brunette beauty has been following in the footsteps of her famous parents as she has worked as an actress for decades

In 2009 she landed her first big film role with Leaves Of Grass with Edward Norton and Susan Sarandon.

In 2016 she played the daughter of her dad Danny DeVito’s character in the 2016 film The Comedian. 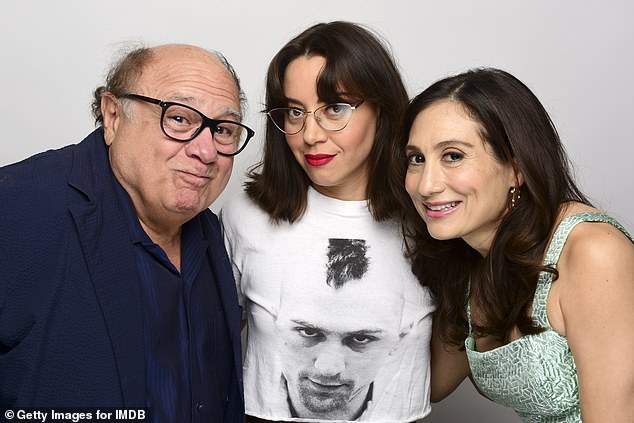 The drama stars Ana de Armas as the late Hollywood icon Marilyn Monroe; the movie is from Brad Pitt’s company Plan B.

In April Perlman said she sometimes regrets her split from DeVito. 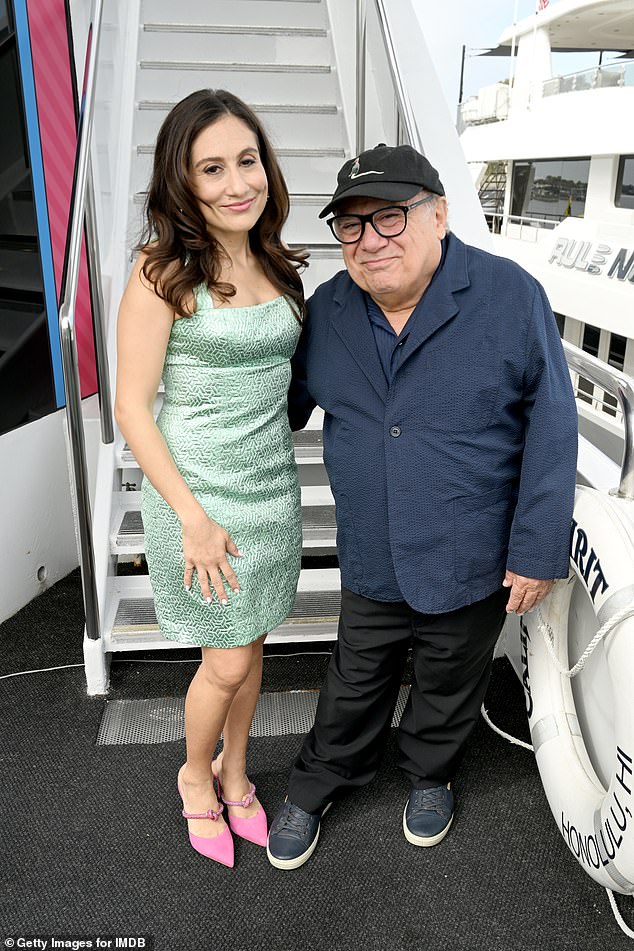 The same shoes! She had on the same pink heels in July when she posed with her father

The stars first broke up in 2012 before reconciling and breaking up again in 2017 but Rhea admitted she sometimes wishes they were still together.

Rhea told People: ‘It’s probably worked out for the best. Sometimes I wish we were still together because those were the glory days, but these are other kinds of glory days.’

Rhea and Danny never filed for divorce and she revealed they still have an amicable relationship.

She said: ‘We’re still separated, but we see each other often, and we’re still a family. We can do things together, we can do things separately. I’m really, really glad that Danny and I were able to navigate some rough days to be able to have this different kind of relationship. I think it’s pretty rare, but we agree on so many things that it makes sense.’ 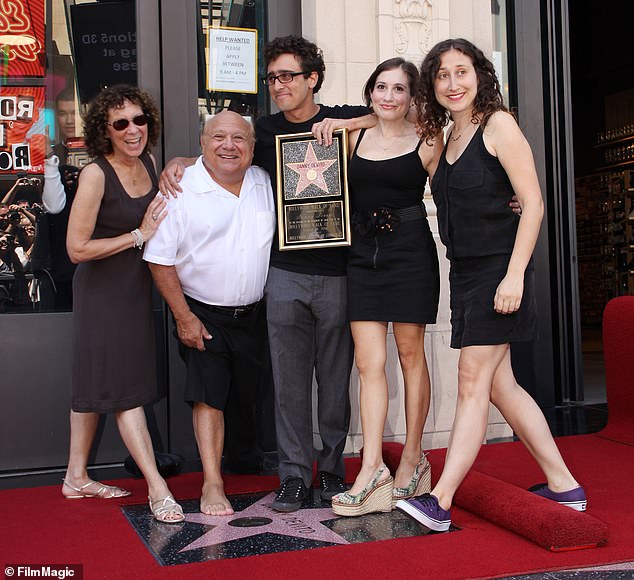 All together now: Danny and Rhea in 2011 with Lucy and her siblings Grace and Jacob

Meanwhile, Rhea shot to fame playing head waitress Carla during Cheers run from 1982 until 1993 and credits the show for her career.

She said: ‘It was huge. And I wouldn’t have had any of the career that I — well, who knows what I would’ve had? Nobody knows what doesn’t happen, but it was the best job in the world.’

However, her kids have always been the most important thing in her life. She explained: ‘Cheers might have been everything in the beginning of my career, but family is everything, everything. If my relationships with my children were strained, I would be beside myself.’