‘I was so unhealthy, I was near death’: Davinia Taylor, 43, discusses addiction, sobriety and ‘ballooning’ to a size 16-18 in candid chat

She has had a well documented battle with alcohol addiction – and former Hollyoaks star Davinia Taylor discussed being near death, finding sobriety and weight gain in a new interview.

The 43-year-old, who is mother to four sons, spoke to the Hot Mess Mums Podcast about what she has been through.

Now focused on well-being, Davinia said: ”I’m definitely not a doctor or anything but I have been extremely unhealthy, near death unhealthy, through fault of my own and genetics and environment or whatever. 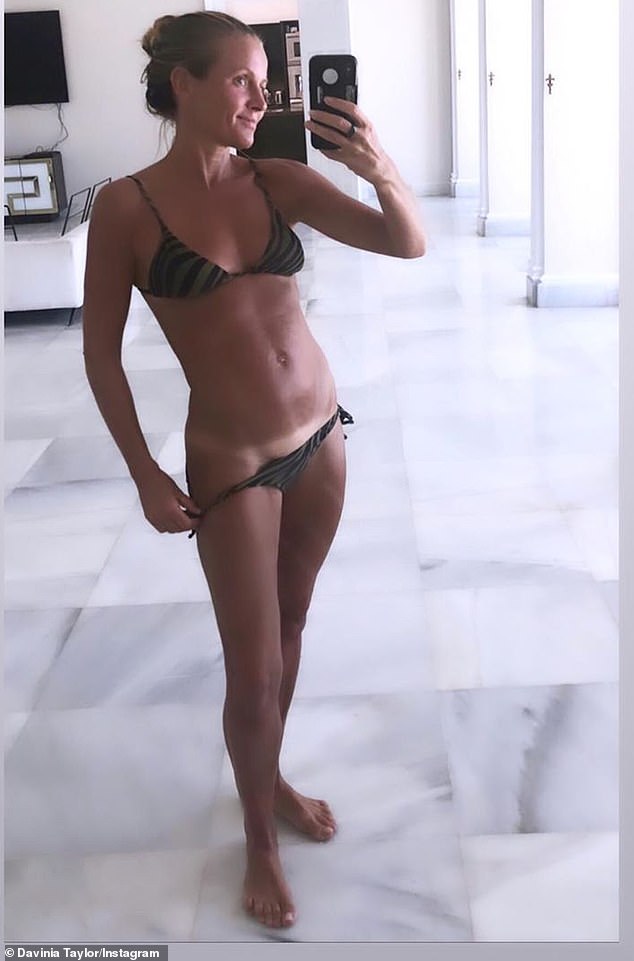 ‘I was so unhealthy, I was near death’: Davinia Taylor, 43, has discussed addiction, sobriety and ‘ballooning’ to a size 16-18 in candid chat with the Hot Mess Mums podcast (stock image)

‘But I am always up for trying something, even if a doctor says don’t try it, I’m sitting there staring at an overweight doctor who smokes 20 a day and drinks a bottle of wine, or dare I say a box of wine every evening, and I’m like, “yeah I think I will do my own experiment”.

‘To see what works best for me to be able to think better, move better, feel better, so I don’t have to turn to old behaviours, whether it be sugar or booze or whatever, I just want to live without any cravings really, because they are horrible’

On becoming sober. she said: ‘I think that a lot of people have to go down the AA route, and I went in with AA but they promote you having sugar to swap your alcohol cravings which didn’t really work for me. 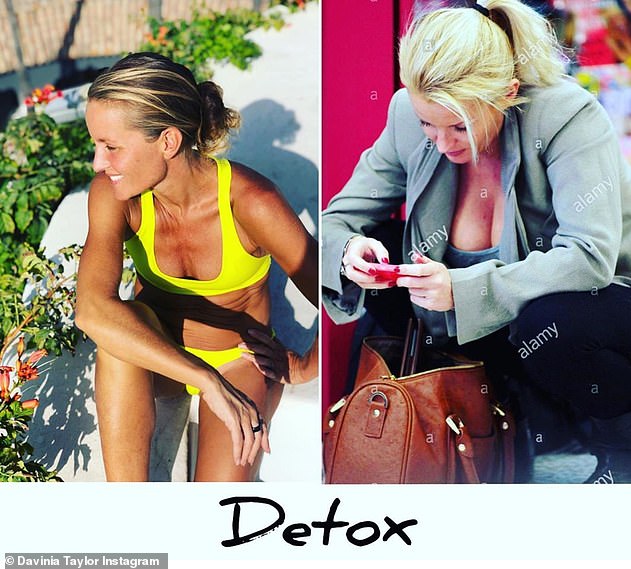 After and before: Now a healthy size eight, Davinia said that at one point, she ‘ballooned’ to a size 16-18, which didn’t feel right for her

‘Having said that AA is a lovely place and a very spiritual place, and you can get a lot of serotonin from the group chats, and that’s the basis of how it works. But I’m not 100% behind the AA movement as you can get some really difficult people in there, so for me it was just working my brain to stop getting cravings.

‘In AA you hear people who have been abused and had all these awful childhoods and I sat there thinking, why am I here? I’ve had an amazing childhood, hilarious upbringing, great education, like what the hell is my problem?’

She continued: ‘That’s when I got into genetics to figure out what it is that makes me, be able to consume so much alcohol and be able to detoxify from it, so I don’t puke up and yet still want more, and that’s all in my genetic code.’# 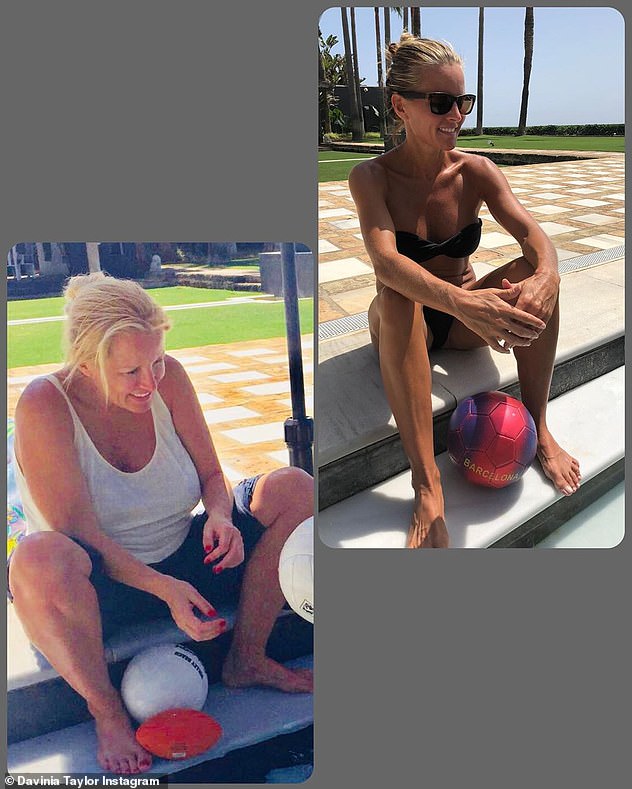 Before and after: She has spent the last five years on a health and fitness overhaul that has seen her drop from a dress size 16 to a tiny size 8

Davinia said that her life has changed somewhat since she used to ‘let her hair down’ in the past.

She said: ‘Well, when I was a party animal it’s safe to say I did let my hair RIGHT down. But now, my ideal lockdown situation in terms of letting my hair down would be just to get myself moving.

‘This does not happen on days one to five by the way. I’ll go for a little run, I’ll listen to some house music, I’ll get some euphoria, I’ll make sure the kids are all in bed and then I will sit in my hot sauna, it’s like a sauna boiler suit.’

Now a healthy size eight, Davinia said that at one point, she ‘ballooned’ to a size 16-18, which didn’t feel right for her.

She said: ‘It depended on what shop I was in, but I was around a 16-18. I did balloon and I didn’t even realise, I just lied to myself, I thought I was eating the right foods, I was eating a wholegrain heavy diet, not realising that they are heavy and super addictive. I was in a state of craving and diet days. 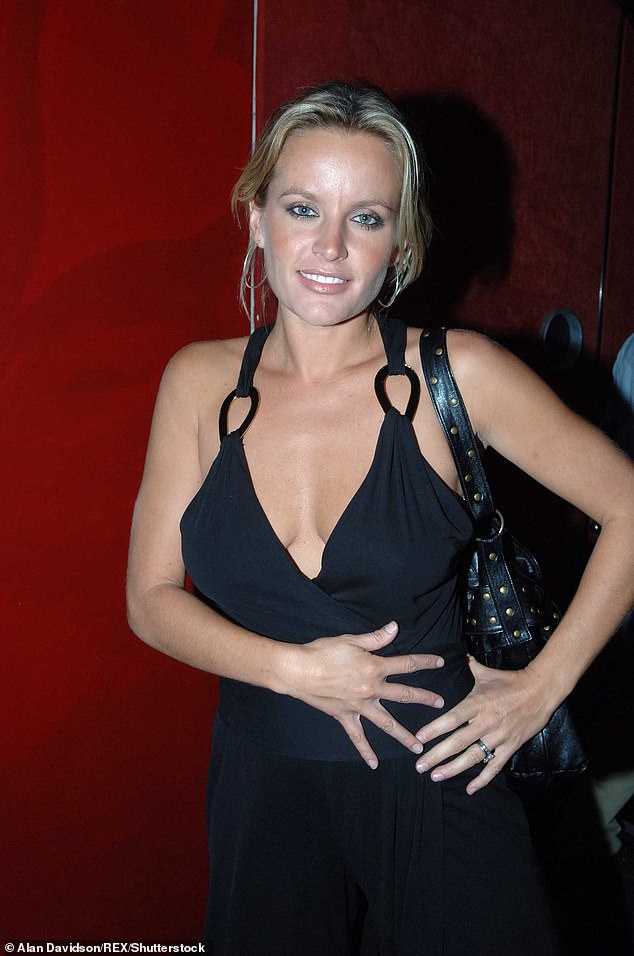 Looking back: She said: ‘Well, when I was a party animal it’s safe to say I did let my hair RIGHT down’ before embracing sobriety 12 years ago (pictured in 2005)

‘What motivated me was that I found it an effort to even get out of bed to go for a shower. So, it wasn’t just the weight, I thought there is something mentally wrong here.

‘I mean because people say, “just go for a walk”, and I thought, I can’t even go for a shower, I was that fatigued. That’s what annoyed me because all I would read is eat less, do more and that’s when I started doing the cold showers, and tapping into my hormones, because fundamentally it was because my hormones were in disarray.’

And talking about her hormones, she said: ‘I just don’t have time to have a midlife crisis twice a week anymore.

‘You have to work with your hormones and work on them yourself. I exercise through my cycle, so for me, from day two to day five I’m rubbish, my oestrogen comes down, so I haven’t got a nice word to say about myself. 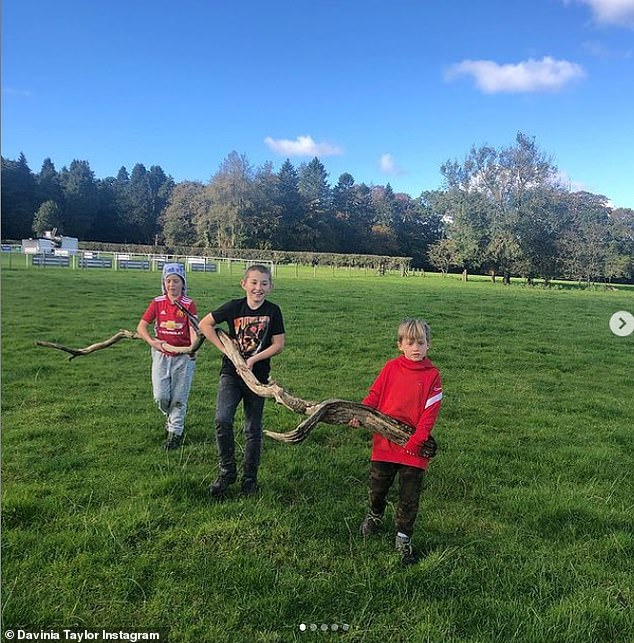 Her loves: Davinia is mother to son Grey, 13, from her seven-year marriage to Dave Gardner, (not pictured) Luxx, ten, whose father she has never revealed. And Asa, seven, and five-year-old Jude, with her current partner Matthew Leyden

‘So I just write those days off and I am going to get HRT to deal with those things. After day five, my hormones come back up again, so probably to day 28, I’m on fire really, I can exercise and do intermittent fasting, I just have to write those days off.’

Davinia is mother to son Grey, 13, from her seven-year marriage to Dave Gardner, Luxx, ten, whose father she has never revealed.

And Asa, seven, and five-year-old Jude, with her current partner Matthew Leyden.

On having four boys, she said: ‘It is violent, very violent. And very loud. It’s far more in your face, and from what I know and from having female cousins, I know that with girls we cry more, and we strategize and such.

‘But with boys they shout, attack it and then move on. So, we don’t have much sulking in the house. What we usually have is lots of shouting, and then saying “I wanna go and live with my dad” that’s the usual one, then we move on.

‘ I think they are a bit like dogs, like they need exercise, and they need to run around to let it all out’.

Davinia was living in Spain during the first lockdown, but is now living in the north of England.

She confirmed: ‘So, during the first lockdown, we got the last EasyJet flight out of Luton and got straight to Spain when the kids school went online.

‘What a difference now we are here compared to the Spain lockdown. We have relocated out of London and we were in quite a small house so just wanted to get out of London.

‘We are back in the north as Matthew and I are both from Lancashire, so we have some outdoor space and it’s nice to have a bit of Northern sense of humour really, when I pop to Tesco and stuff. It’s just nice to be home really.’

Listen to the full interview at https://hotmessmumsclub.com/ hosted by Kelly Pegg and Jenny Powell. 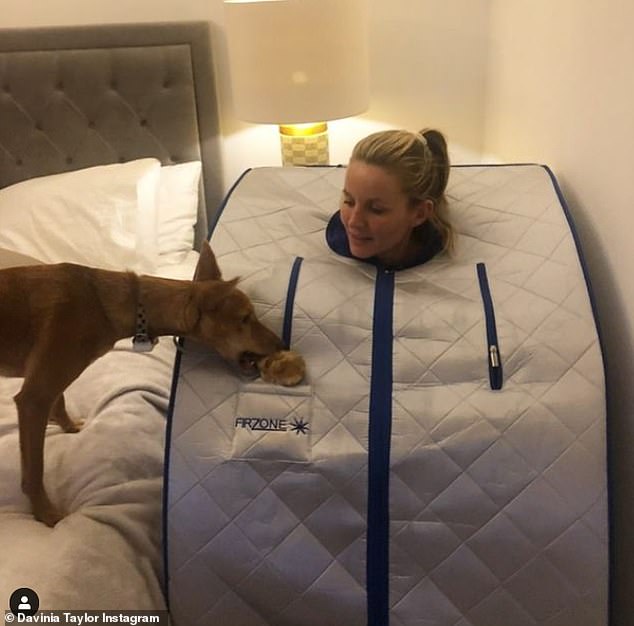 She said of her routine now: I’ll go for a little run, I’ll listen to some house music, I’ll get some euphoria, I’ll make sure the kids are all in bed and then I will sit in my hot sauna, it’s like a sauna boiler suit’ (pictured)