Demi Moore reveals she suffered a miscarriage at six months along

Demi Moore has revealed she was raped at 15 years old and 27 years later started on a downward spiral fueled by drugs and alcohol after she suffered a miscarriage with Ashton Kutcher’s baby.

The star opens up about the ordeal in her teenage years – then going by the name Demetria Guynes – in her forthcoming book, Inside Out, obtained by The New York Times on Thursday.

Moore, now 56, had just started dating Kutcher – who is 15 years her junior – when she became pregnant with a girl aged 42, she has revealed for the first time.

They lost the baby in 2004 when she was six months into the pregnancy and Kutcher was starring in That 70s Show. 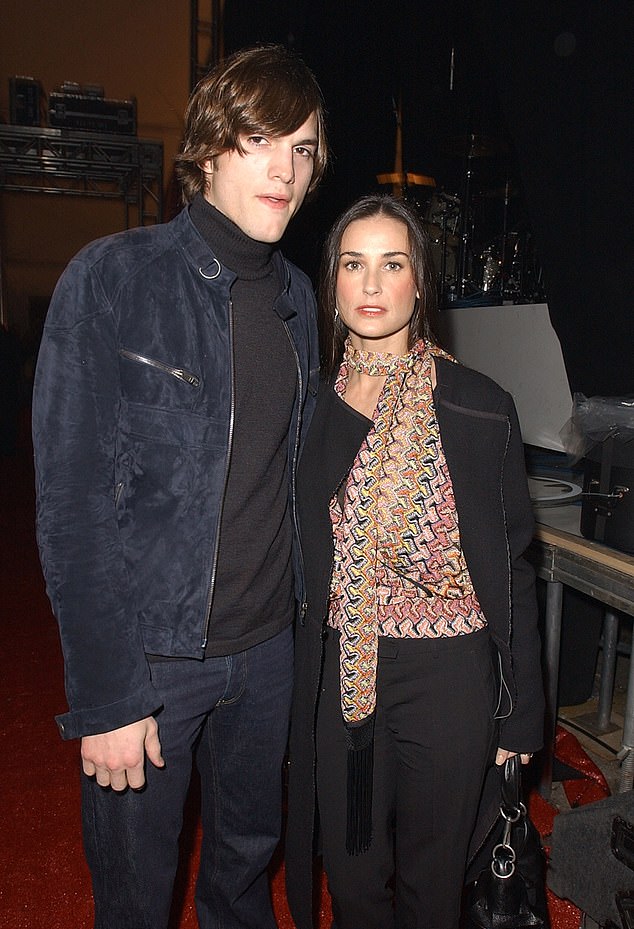 Demi Moore suffered a miscarriage when she was with Ashton Kutcher. The Ghost actress opens up in her forthcoming book, Inside Out, it was revealed on Thursday. She is pictured February 2004 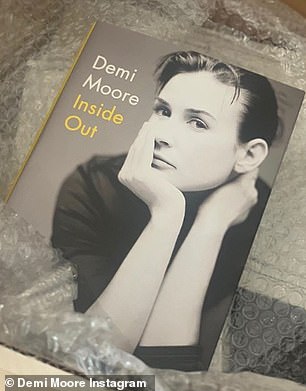 Demi says she was raped at 15 years old. She is pictured (left) in her Sophomore Year, 1978, at Fairfax High School, Los Angeles. The 56-year-old is plugging her new tell-all book Inside Out (right), which goes on sale September 24

The couple – who started dating in 2003 – were going to name their daughter Chaplin Ray.

Describing her romance with younger man Kutcher as ‘a do-over, like I could just go back in time and experience what it was like to be young’, the star married him in 2005.

She adds in the book that with him she was able to live out her youthful years ‘much more so than I’d ever been able to experience it when I was actually in my twenties’.

Moore says that after moving out of her family home on her 16th birthday to live with a guitarist and then marrying rock musician Freddy Moore two years later, her younger years were ruined by body image issues and an addiction to cocaine and booze as she rocketed to fame on General Hospital and movies such as About Last Night… .

She explained to The Times about her binge-eating and obsession with weight: ‘When I was younger, I was obligated to be of service. I wouldn’t be loved if I wasn’t — if I didn’t give of myself. My value was tied into my body.’

But in the book out September 24, Moore reveals she blamed herself for the miscarriage during her relationship with Kutcher and started drinking again to deal with the pain.

They tried again for a baby, this time using fertility drugs, but it didn’t work.

Moore opens up about how during her relationship with Kutcher her drinking got out of control and she started abusing Vicodin.

She then learned he had been unfaithful and they separated in 2011 before their divorce was finalized two years later. 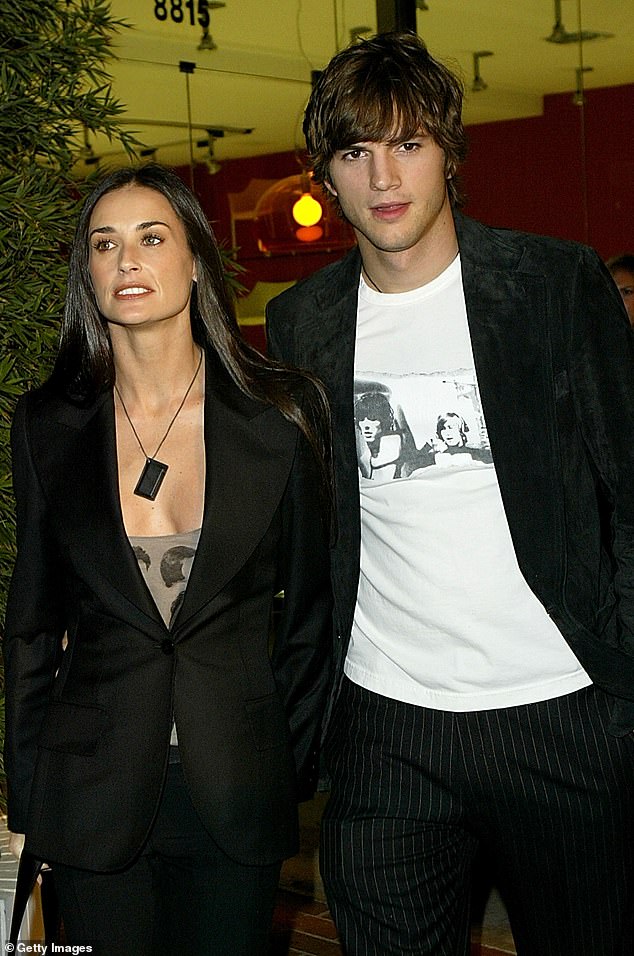 Moore started dating Kutcher in 2003 and described her romance with the man 15 years her junior as  ‘a do-over, like I could just go back in time and experience what it was like to be young’ 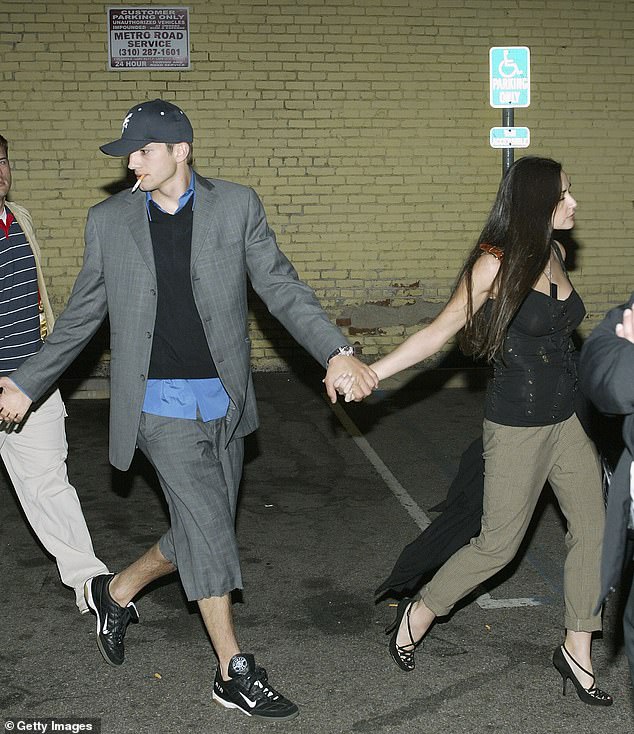 Was she pregnant here? In June 2004 Moore seemed to have a little bit of a bump at the MTV Movie Awards after party. He was 26 years old at the time. They were going to name their daughter Chaplin Ray; seen in June 2003 soon after they first started dating 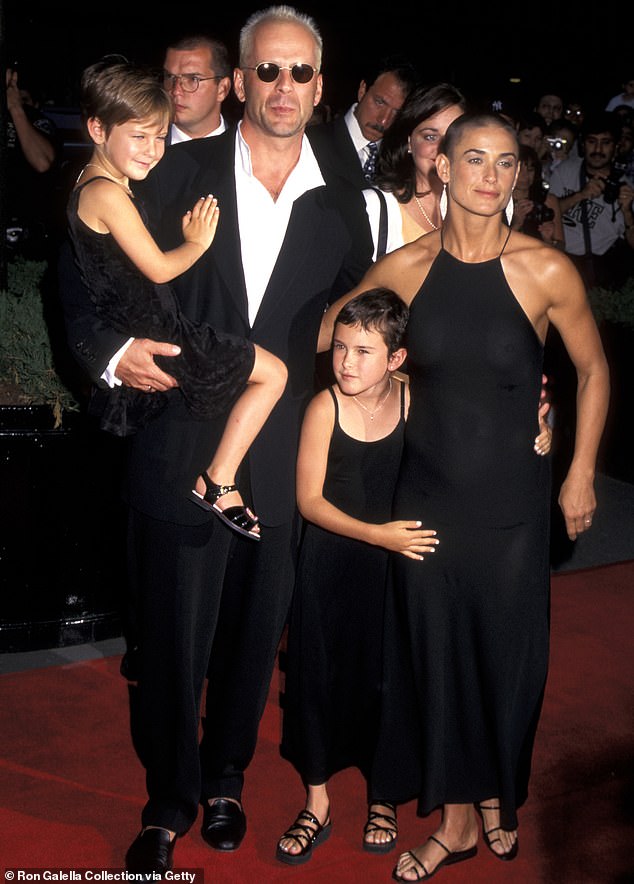 Moore says her second husband didn’t like her working so much. She was wed to Bruce Willis in the 80s and 90s and they are seen in 1996 with two of their daughters, Scout and Rumer

He is now wed to Mila Kunis with whom he has two children.

The star already had three daughters with actor Bruce Willis. They are Rumer Willis, 31, Scout Willis, 28, and Tallulah Willis, 25.

But before she and Kutcher were officially divorced, Moore suffered a seizure after smoking synthetic cannabis and inhaling nitrous oxide in 2012, the Times relayed.

She was with her daughter Rumer at the time who joined her siblings Scout and Tallulah by going on to shun her. Soon after Moore went into rehab.

‘Part of my life was clearly unraveling,’ Moore told the Times. ‘I had no career … No relationship.’

At the time she had a memoir deal and planned to write about the mother-daughter relationship but put plans on hold.

Moore finally started writing this month’s release two years ago with the help of The New Yorker writer Ariel Levy who says they divulged everything with an aim to remove anything that was too private during the editing process but they didn’t cut anything in the end.

The Times reports she said: ‘There’s nothing I have to protect. Really.’

Moore also says in the book that she stays sober because she doesn’t want her power taken away again. 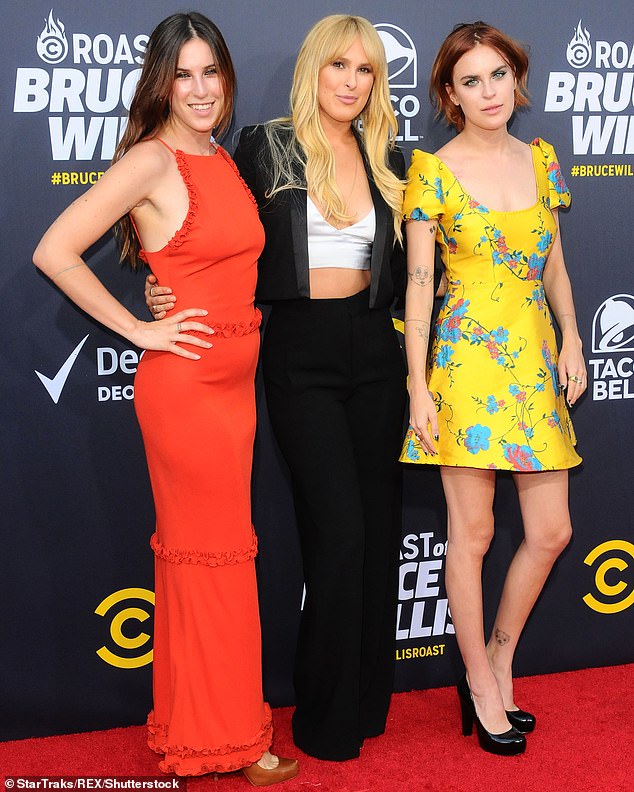 The star has three daughters with Bruce Willis – Rumer Willis, 31, Scout Willis, 28, and Tallulah Willis, 25 (pictured in 2018). Her relationship with them has been a rollercoaster throughout her battle with alcohol and drugs

Gwyneth Paltrow says Moore writing a book has helped with her ‘healing journey — physically, mentally, emotionally’. Pictured they toast goops’s 10th anniversary and the launch of the goop London pop-up at the Serpentine Sackler Gallery on October 8, 2018 in London

And she also claimed that Willis didn’t like her working so much because it took away from their home life with their three kids. Moore also said that Bruce told her he didn’t know if he wanted to be married.

As for sharing so many details in her book, she said: ‘It’s exciting, and yet I feel very vulnerable. There is no cover of a character. It’s not somebody else’s interpretation of me.’

She told the Times about her spiral: ‘I’m definitely not interested in blaming anyone. It’s a waste of energy.’

Speaking to the publication about her exes reading the memoir, she added: ‘I hope that everyone that’s in the book feels like it’s — I don’t know what I hope they feel. Good, not bad.’

Ashton and Bruce have yet to comment on these claims in Demi’s book.

But she has received support from her daughters who the Times reports didn’t not request for anything to be removed. Moore, Rumer and Scout are even seven months into a 10-month course on spiritual psychology after she ditched Kabbalah.

Her friend Gwyneth Paltrow stopped following the practice that stems from Judaism in 2014. Paltrow praises Moore in the Times article for paving the way for actresses to receive salaries more akin to their male counterparts and says the new book has helped Moore’s ‘healing journey — physically, mentally, emotionally’. 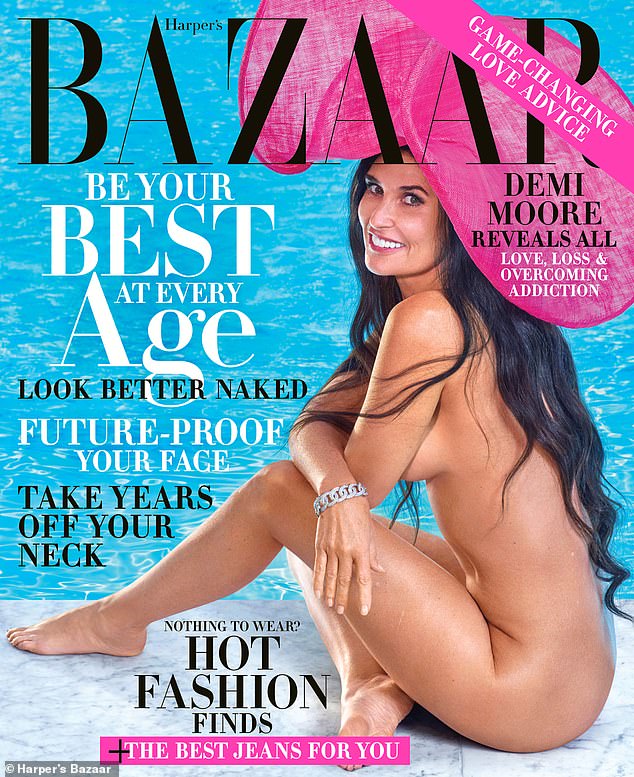 No clothes needed! Moore has posed completely nude again, this time for the October issue of Harper’s Bazaar magazine

The Times interview comes after she was interviewed by Lena Dunham for the October issue of Harper’s Bazaar; she was photographed in the nude for the cover.

The last time she posed nude was for the 1991 Vanity Fair cover. ‘Thank goodness people remember the photo, they don’t remember the article,’ she told the monthly magazine. In 1992 she posed for the same magazine with just body paint on.

The Striptease star has promised to dish on her 40-year career, her marriages and her issues with addiction. ‘Inside Out is a story of survival, success, and surrender—as well as resilience,’ the press statement for the book said. 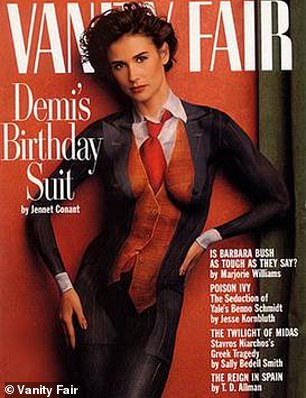 She shocked the world: In 1991 she showed off her bare bump on Vanity Fair, left, then the next year she was nude again but with paint over her skin

‘[It’s] a wrenchingly honest portrayal of one woman’s at once ordinary and iconic life.’

‘My daughters offered me an opportunity to start to change the generational pattern,’ she told the magazine. ‘To be able to break the cycles.’

In one part of her book she talks about her childhood. She grew up with hippie parents in a dysfunctional relationship.

And when she was still a child, she had to pull pills out of her mother’s mouth before she overdosed.

‘The next thing I remember is using my fingers, the small fingers of a child, to dig the pills my mother had tried to swallow out of her mouth while my father held it open and told me what to do. Something very deep inside me shifted then, and it never shifted back. My childhood was over,’ said Demi.

The red carpet fixture also states in the book she found out her dad Danny Guynes, was not her biological father.

She moved on quickly. Demi was only a teenager when she came to Hollywood. The raspy voiced beauty got a few parts in movies then was noticed after she landed a role on the soap opera General Hospital. She played Jackie Templeton and fans were quickly asking, who’s that girl?

Three years later she became a Brat Packer when she co-starred with Rob Lowe and Andrew McCarthy in St Elmo’s Fire.

The successful films About Last Night…, One Crazy Summer followed. She had a massive hit on her hands in 1990 with Ghost then reached A-list status with Indecent Proposal in 1993. In 1996 she was the highest-paid actress in Hollywood with Striptease.

She has since made movie after movie and landed a role on TV’s Empire. Next she can be seen in Corporate Animals with Hangover vet Ed Helms.

‘Everything that occurs in our individual lives informs us. Shifting, molding, presenting the opportunities for the exact purpose to get us where we are in the present time,’ she told Lena.

‘Whatever that may be. All the projecting of who they think I am [were] the very things that were pushing me out of two elements: my comfort zone, and my control. [They were] trying to get me to let go and really be who I am. And I don’t think that I knew how to do that.’

The magazine also shares an insightful passage in Moore’s book when she talks about being the neighbor of film star Nastassja Kinski in West Hollywood. At the time, Demi was a teenager.

Kinski, who is best known for the films Cat People and Tess, served as an inspiration.

‘She had this sense of herself that I so wanted. Even though I didn’t know what it was. To me, she represented a sense of freedom that I couldn’t even fathom. It was a sense of belonging. [And I felt] if I could fit there, then it would mean it’s okay that I’m here…that it’s okay that I was born.’

Moore left her fans with some hope, saying she has found security in her 50s.

‘The kind of love I grew up with was scary to need and painful to feel,’ said the star. But ‘learning that I’m okay with just me was a great gift I was able to give myself,’ she stated. 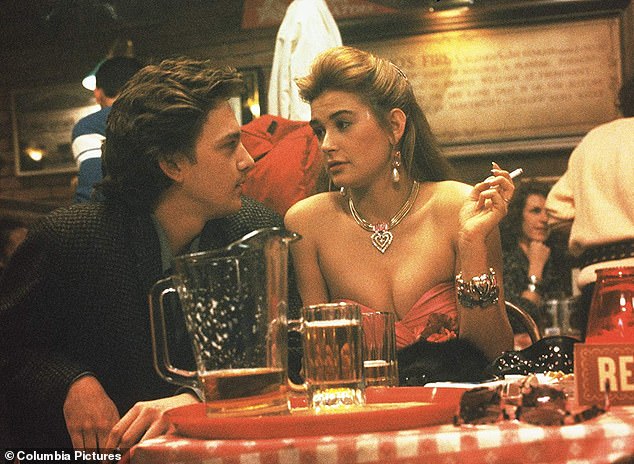 A big fame game: She became a Brat Packer when she co-starred with Rob Lowe and Andrew McCarthy in St Elmo’s Fire in 1985 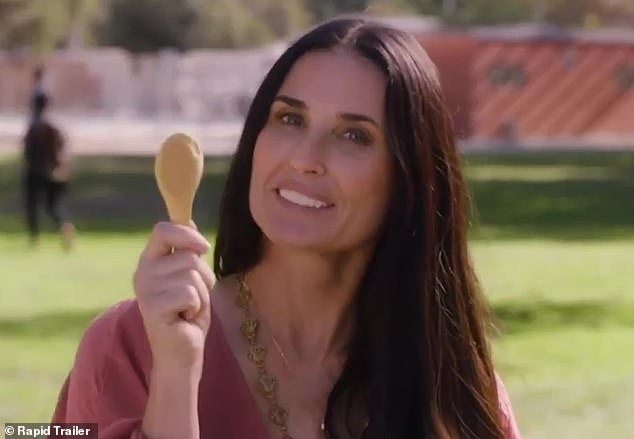 New project: The Hollywood staple can next be seen as an aggressive boss in Corporate Animals, out September 20