Demi Moore, 57, puts on racy display in a plunging bodysuit and fishnets as she makes a sizzling surprise appearance at the Savage x Fenty show

She’s a Hollywood star who never fails to look sensational whenever she steps out.

And Demi Moore was sure to command attention as she put on a very racy display during Rihanna’s Savage x Fenty show Vol 2 in Los Angeles which aired on Friday.

The actress, 57, looked sensational as she posed up a storm in a plunging black bodysuit with a lace trim to cover her ample assets. 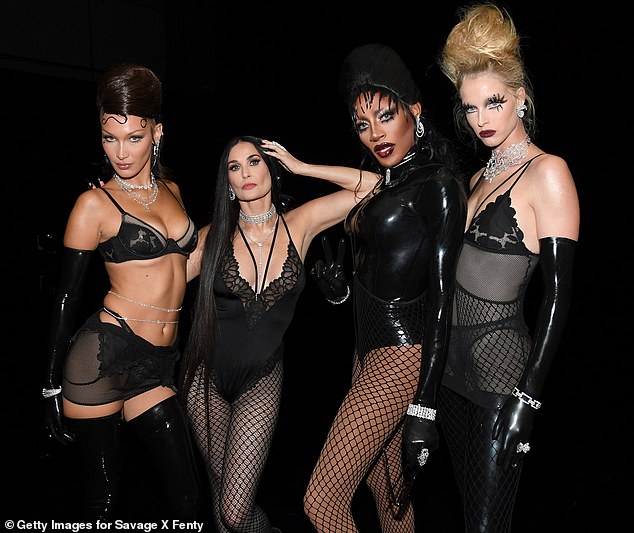 Sizzling: Demi Moore put on a very racy display in a black lace bodysuit as she made a surprise appearance at Rihanna’s Savage x Fenty show on Thursday (pictured with Bella Hadid, Jaida Essence Hall, and Abby Champion)

Demi exuded confidence as she flaunted her toned physique in the slinky one-piece which she paired with some fishnet tights.

She added some sparkle to her sexy ensemble by donning a diamond choker necklace and drop earrings as well as a statement ring.

The beauty wore her long dark locks down, styling them poker straight and letting her tresses cascade over her shoulders.

During the star-studded show Demi was seen reclining on a blue sofa as she was surrounded by other stunning models all in a selection of lacy lingerie. 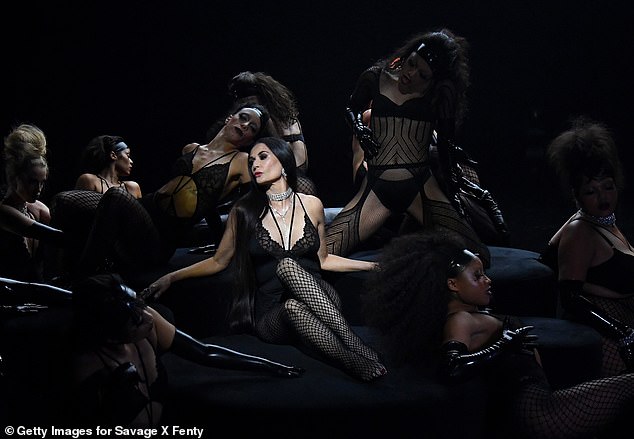 Wow! All eyes were on the actress as she commanded attention in a plunging black leotard and fishnet tights while surrounded by other stunning models

Demi also appeared to be in good spirits as she posed for a snap alongside model Bella Hadid, who rocked a lace bra and thigh-high boots.

Also seen during the event were models Irina Shayk and Cara Delevingne who all impressed in a selection of lingerie.

Cara set pulses racing in a plunging black velvet bra with silver embroidery, teamed with fishnets and daring black makeup divided her face into a look of two halves. 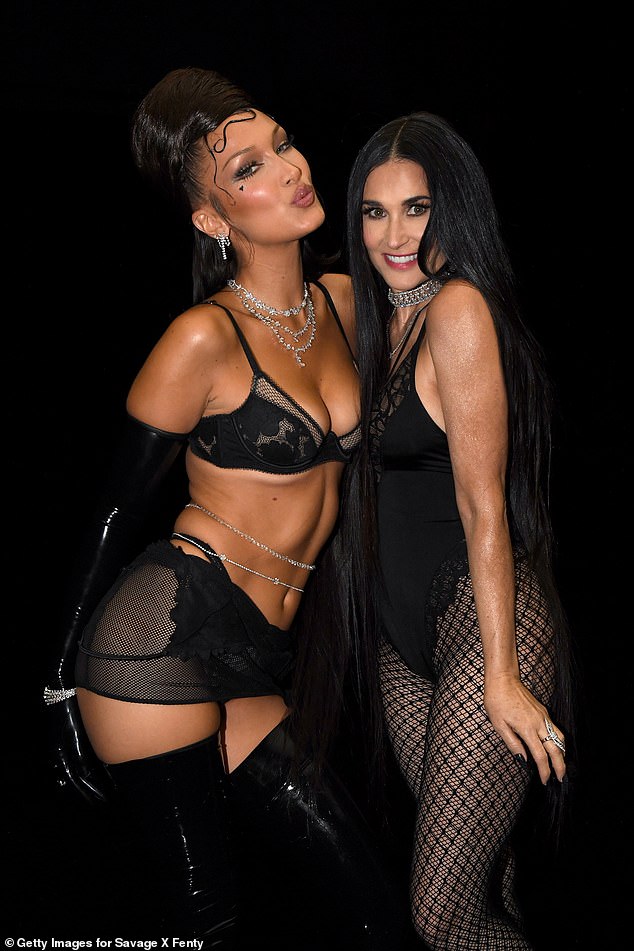 Flaunt it: Demi appeared to be in good spirits as she posed for some snaps with Bella Hadid 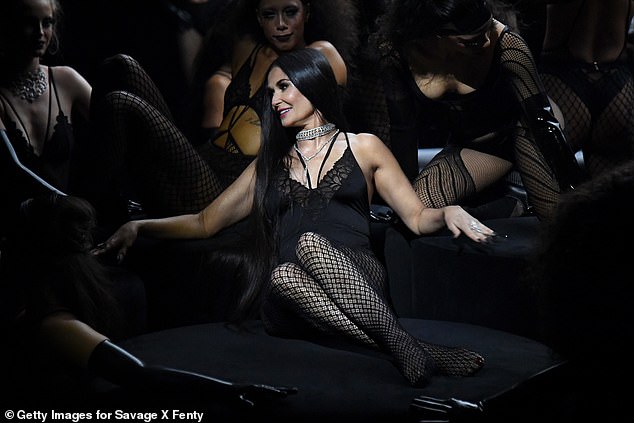 Glam: The star wore her long dark locks down and let them cascade over her shoulders as she posed up a storm on a blue sofa

While Irina paraded her amazing physique in a sheer black lace bra and sequinned shorts, teamed with a long silk robe.

Paris Hilton, 39, also made an appearance, with the hotel heiress putting on a sultry display in playful pink fishnets and a lace leotard.

And Rihanna didn’t let down her models as she dressed up in her own revealing look, opting for striking leather hotpants, black gloves and an oversized statement top. 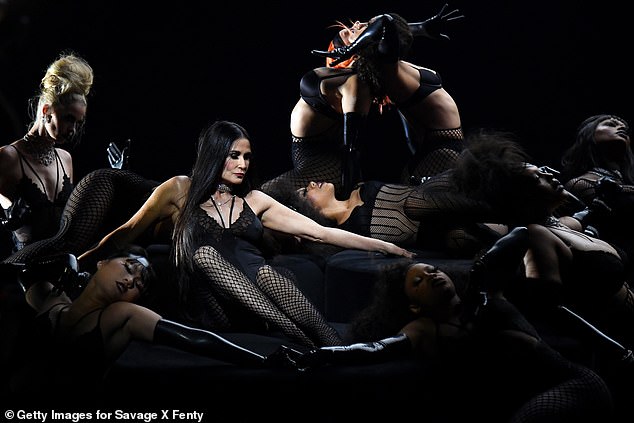 Stunning: Demi moved her toned limbs around as she modelled in the Savage x Fenty show 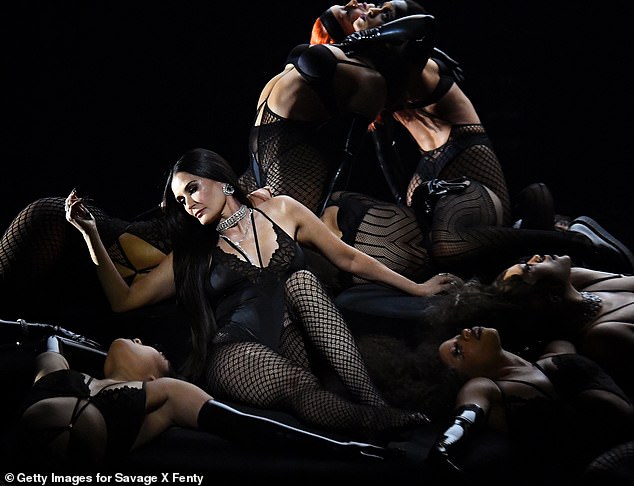 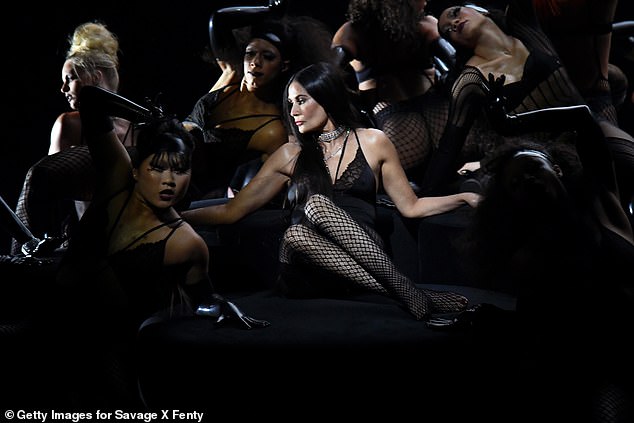 Centre of attention: She exuded confidence in the plunging bodysuit which boasted a lace detail to cover her assets 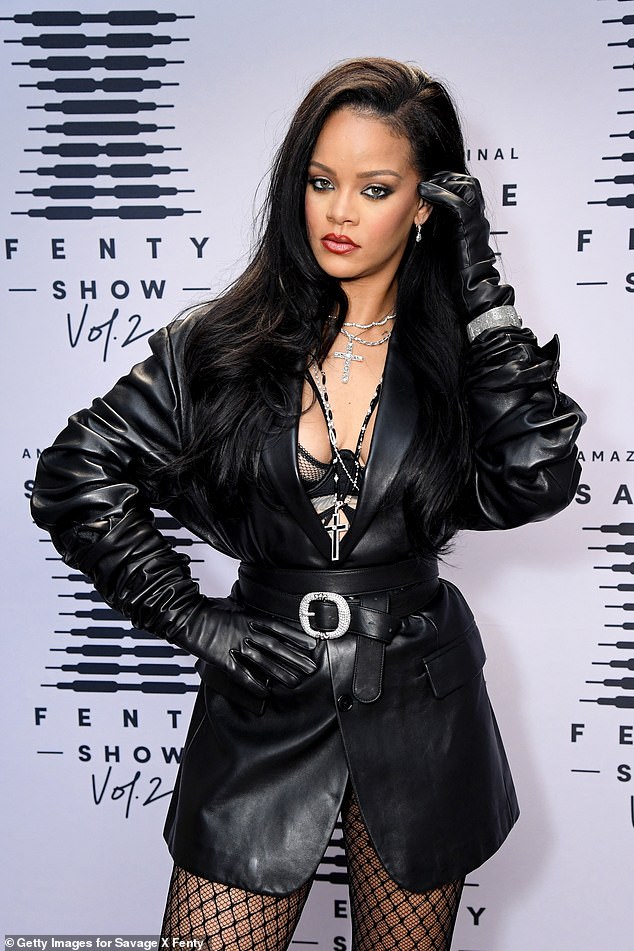 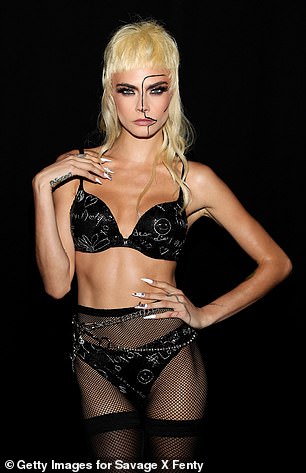 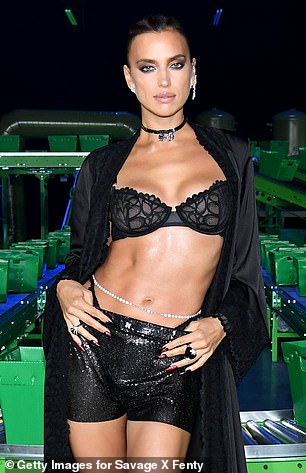 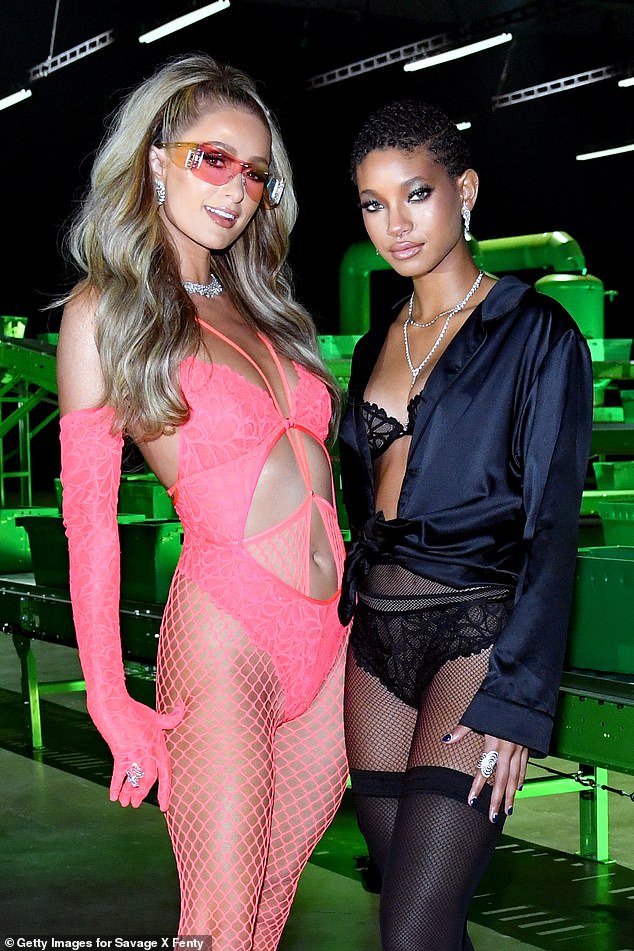 Pose: Paris Hilton sizzled in a pink lace cutout leotard and matching gloves as she posed for some snaps with Willow Smith, 19, during the star-studded event