Disney is making a very necessary change to its Splash Mountain attraction.

As the nation continues to march for Black Lives Matter and mourn the deaths of George Floyd, Breonna Taylor, Elijah McClain, and countless other Black lives, a number of industries and institutions are grappling with racist histories and current complicity.

Bands are changing their names, white actors are stepping down from voicing Black characters they never should have played to begin with, and major beauty brands are pledging to uplift Black-owned businesses. Now, after plenty of backlash regarding Splash Mountain's connection to the racist film Song of the South, Disney has announced plans to re-theme the ride around Princess and the Frog.

“With this longstanding history of updating attractions and adding new magic, the retheming of Splash Mountain is of particular importance today,” the public relations director of Disneyland Resort, Michael Ramirez, wrote in a statement on the Disney Parks Blog. “The new concept is inclusive–one that all of our guests can connect with and be inspired by, and it speaks to the diversity of the millions of people who visit our parks each year.”

Ramirez also revealed that the plan to “update” the ride and its surroundings at both Disneyland park in California and the Magic Kingdom park in Florida has been in the works for at least a year.

“Like Princess Tiana, I believe that courage and love are the key ingredients for wonderful adventures. I am delighted to be a part of bringing this fun-filled experience to our guests,” said Charita Carter, the senior creative producer leading the project at Walt Disney Imagineering. 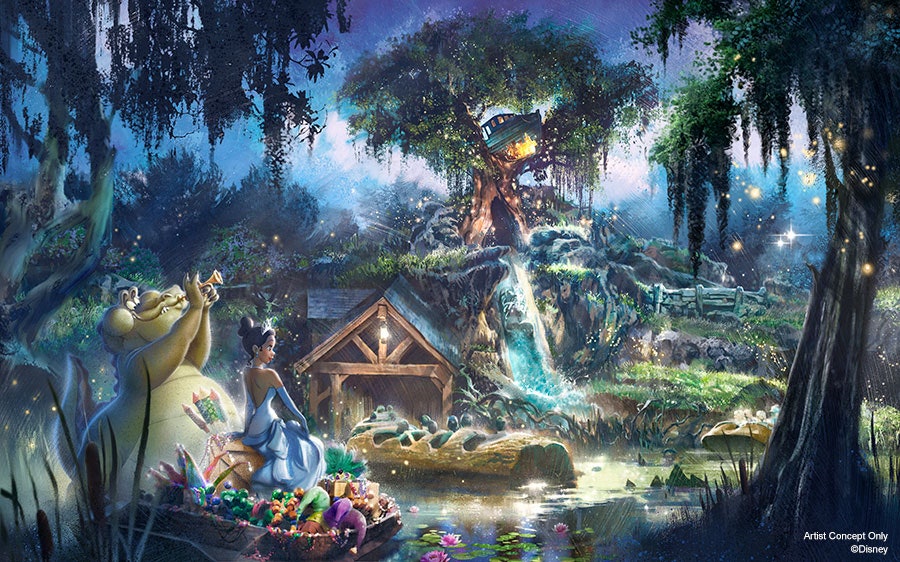 An “artist concept” of the new Princess and the Frog themed ride, courtesy of the Disney Parks Blog.

The statement also explained that the ride will “pick up” after the film's final kiss, and “join Princess Tiana and Louis on a musical adventure – featuring some of the powerful music from the film–as they prepare for their first-ever Mardi Gras performance.”

“It is really exciting to know that Princess Tiana’s presence in both Disneyland and Magic Kingdom will finally be fully realized," Anika Noni Rose, the actor who voices Princess Tiana added. "As passionate as I am about what we created, I know the fans are going to be over the moon. The Imagineers are giving us The Princess and the Frog Mardi Gras celebration we’ve been waiting for, and I’m here for it!”