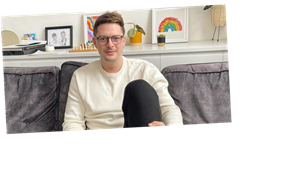 He's been working tirelessly on the NHS frontline for the past year, and now Dr Alex George has revealed he's taking a well-earned break from work to recharge his batteries.

The television personality, who shared his COVID-19 vaccination experience, said the last year has taken its toll on him and he's having a week off to recuperate.

The 30 year old took to Instagram to share the news with his followers, alongside a picture of himself sat at home on his sofa.

He began: "It's been a bit of an up and down week. I always want to be honest with you guys and the last thing I want is for my page to be a highlight of good days, hiding the bad. "It's been a long and hard year, which ultimately takes it's toll. I have really felt it this week and I am aware I need a break," he explained.

"I am taking a full week off from Tuesday. Recognising when you are becoming stressed and acting on it, is so important."

The former Love Island star went on to say that he has plenty of things he wants to achieve, but in order to do that, he needs to be able to look after himself mentally and physically.

Alex continued: "There are good times on the horizon as well as things I want to achieve, most importantly in my role but also in my personal life and with my new brand (which I am rather proud of). "To be able to do this I need to look after my physical and mental health. Never be ashamed to take a break, when you need it," the doctor told his fans.

"I believe it's a sign of self awareness and ultimately strength. Happy Sunday everyone and remember to be kind to yourself," Alex concluded.

As well as working on the frontline, Alex also tragically lost his younger brother Llŷr to mental health in July last year.

Speaking about dealing with the grief of his brother's passing on ITV's Lorraine in February, the ITV star expressed: "It's been hard hasn't it? It was so left field. "I dealt with the break up of my relationship, being on my own most of the year and the challenges that's brought."

Alex, who was recently supported by Ruth Langsford, continued: "Then all the work stuff and all the challenges that brought too and this [his death] was so left-field and so unexpected.

"It just swipes you from your knees really. It was very, very hard."