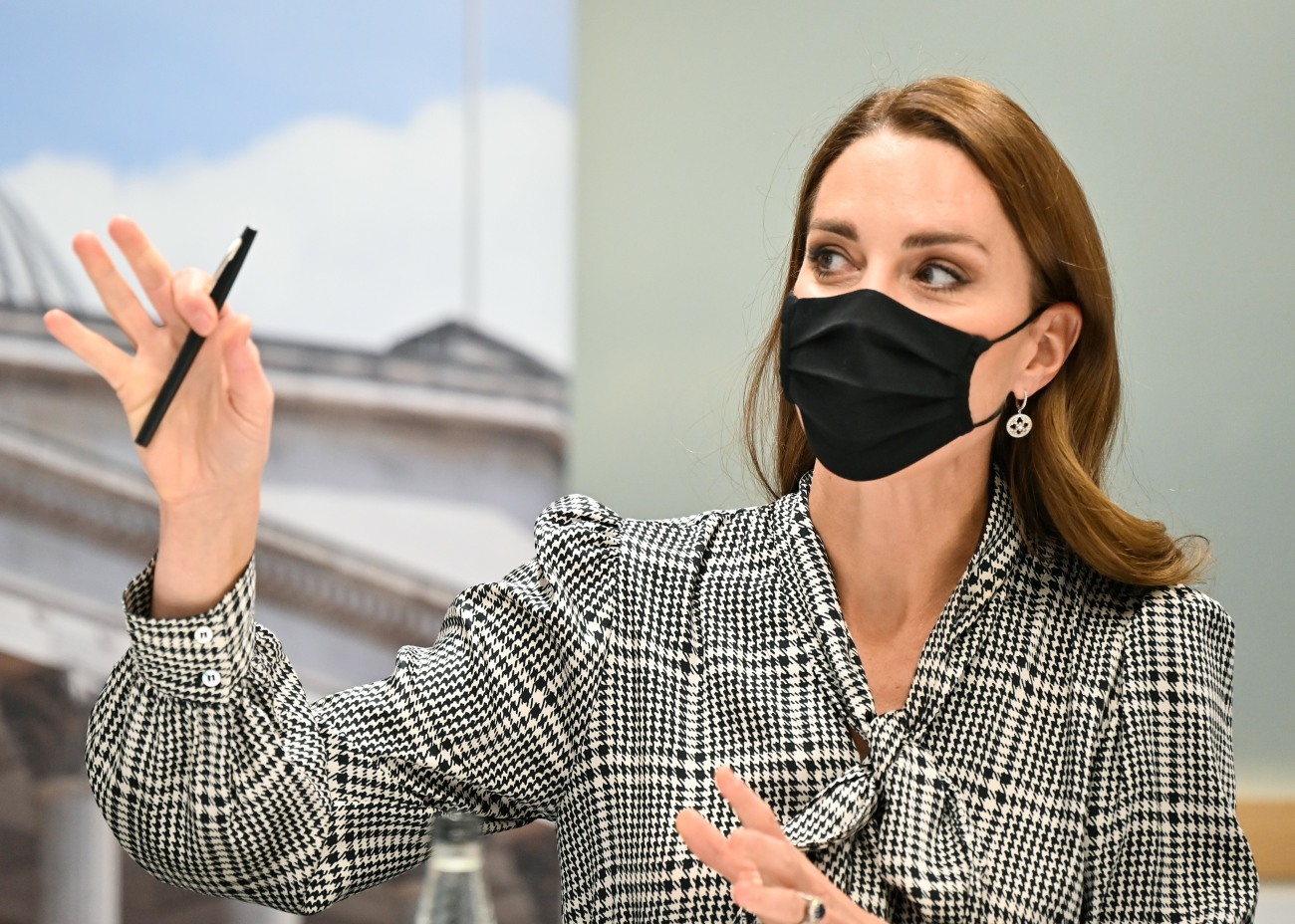 Here are more photos of the Duchess of Cambridge’s trip to University College London’s Centre for Longitudinal Studies yesterday. As I mentioned in yesterday’s post, this trip had something to do with the Keenwell Institute for Buttons and Early Years, aka The Royal Foundation Centre for Early Childhood. The Keenwell center is merely a desk inside Kensington Palace. It’s probably just some guy tasked with creating all of this busy work out of thin air. That’s the thing though – although we can all safely say that Kate’s Early Years initiative is busy work, Kate really, really wants us to believe that she’s a self-styled expert, that she’s pretty much a child-development scholar, and that none of this is a “vanity exercise.” That’s why she’s cosplaying ‘80s secretaries and wandering around universities. Because she’s already an expert and she wanted a briefing from the experts, her peers!! Plus, I think she’s going to take credit for the university’s work at some point:

The Duchess of Cambridge has made the area focusing on the first five years of kids’ lives as a key part of her public work and said today, “Our early childhoods shape our adult lives and knowing more about what impacts this critical time is fundamental to understanding what we as a society can do to improve our future health and happiness.”

Her visit to University College London’s Centre for Longitudinal Studies came as the institution launched its Children of the 2020s project, which will track the holistic development of children from 9 months to 5 years. In a statement, Kate called it a landmark study that “will illustrate the importance of the first five years and provide insights into the most critical aspects of early childhood, as well as the factors which support or hinder positive lifelong outcomes. I am committed to supporting greater in-depth research in this vital area and I’m delighted to be meeting all those behind the study at this early stage.”

During her visit on Tuesday morning, Kate viewed some of the historic research into early childhood dating back to the 1940s — including a ‘Birth Questionnaire’ given to new mothers in 1958. That survey included questions about pregnant women’s smoking habits, which enabled researchers to track the impact that smoking during pregnancy had on a baby’s birth weight and how it continued to affect different aspects of a child’s life into adulthood. This led to a public health campaign to stop women smoking whilst pregnant, Kate’s office said.

During a roundtable discussion, the duchess, 39, was shown graphs charting brain development from early childhood to early adulthood and how the environment plays a crucial role, as well as how a higher socio-economic status correlates to a greater amount of gray matter in a young child’s brain. Another slide explained how the study would look at factors like parental mental health, trauma, life events, stressors and regional and neighborhood characteristics in relation to child development.

One of the professors with the UCL Centre told the press that Kate “asks the most pertinent questions. … It really shows that she is really interested in the subject because she is extremely knowledgeable. It’s like speaking to a colleague really.” Oh lord, give that poor woman a raise. Throughout People’s piece, you can tell that Kate’s office was merely briefing the press on what the UCL Centre is doing and describing their work almost as if Kate is responsible for it? Which is very strange, that the university didn’t want their own people briefing the media on what seems to be a UCL-exclusive study.

Anyway, I’ve said this a million times and I’ll say it a million more times: Kate’s busy-work around child development actually offends me. She’s trying to simplify reams of research into little keen soundbytes, but she already has the talking points she wants, negating the importance of actually collecting data and doing the groundwork of this kind of huge research project. She wants to breeze in and say “look, this is why the early years are important, no one knew this before me!” Plus, Kate continuously equates two-parent, affluent upbringings as the only “right” way to raise healthy children. It’s a f–king mess. 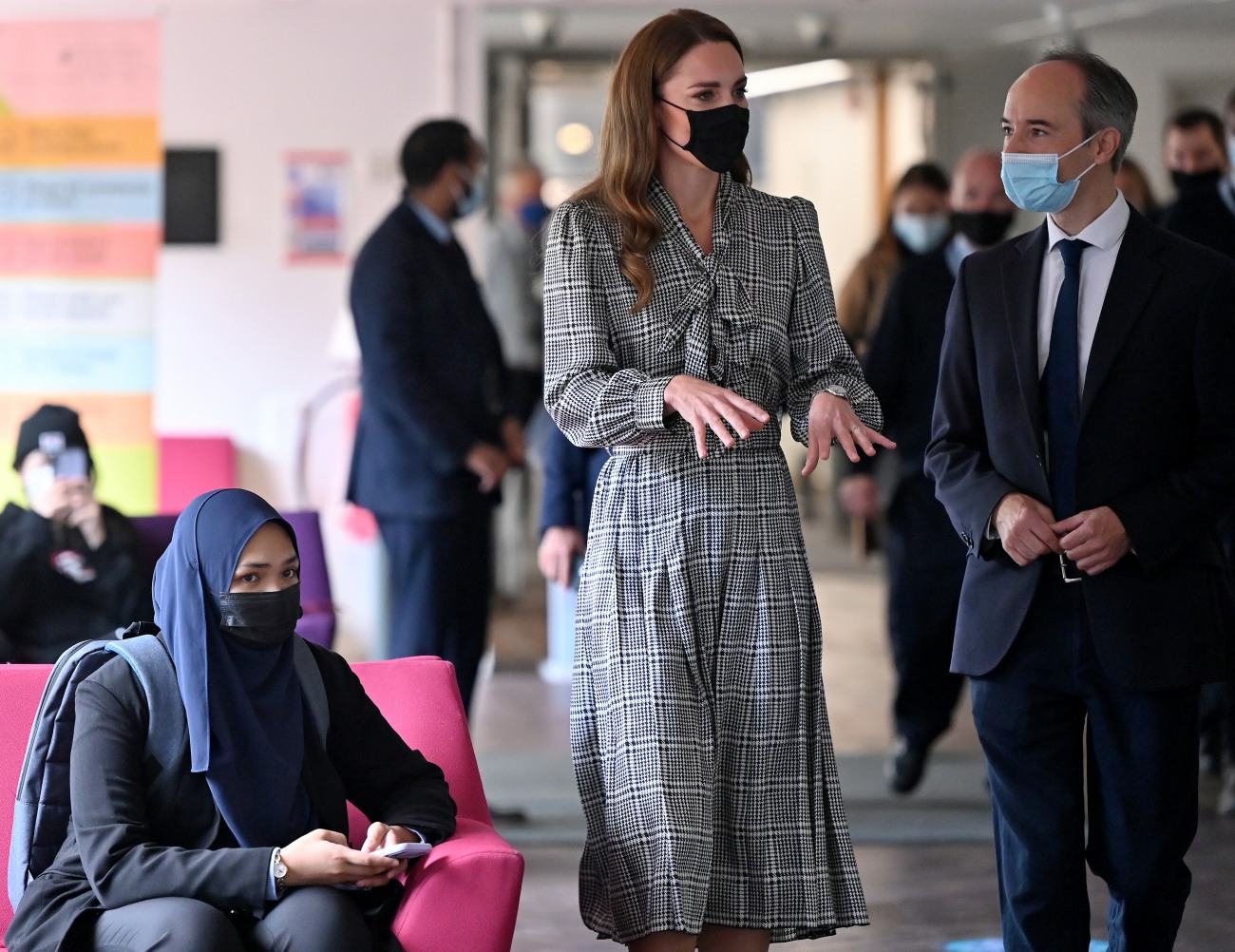