As Richard Wheatley, the head of a digital drug cartel, Dylan McDermott is unlike any criminal audiences have seen on the Law & Order franchise. And no, it’s not just his penchant for turtlenecks or his big money energy. It’s the fact that he’s the most formidable foe Detective Elliot Stabler (Christopher Meloni) has ever faced.

And given how Organized Crime is already bending of the rules of the franchise — the premiere introduced a more serialized narrative and there were no signature “dun duns” — Richard is not going anywhere anytime soon, making him the big bad of the spinoff centered around Elliot’s return to the long-running TV universe.

“I think people will be like, ‘Wait, this is not Law & Order,’” McDermott acknowledges to ET by phone after returning to New York City to finish filming the remaining episodes of the first season. “But I think Chris wanted something different. I certainly wanted something different. Otherwise it’s just SVU all over again or the original Law & Order. So I love that it’s a fresh take.”

That fresh take, led by showrunner Ilene Chaiken, means exploring Richard’s personal and family life as deeply as Elliot’s. “This is a crime family,” McDermott says, referring to Richard’s cartel as a “family business.” But it doesn’t mean that everyone gets along.

In the premiere, audiences got a taste of what that includes, from the ruthless way he dispensed of his bigoted father, Manfredi Sinatra (Chazz Palminteri), leading Elliot to believe that he’s responsible for the murder of his wife, Kathy (Isabel Gillies), to being fiercely protective of his sons — adopted or not.

“I mean, what an introduction to a character. The very first episode, he kills his father,” McDermott says. “That’s a wild moment because then you realize you know exactly who he is and that he’s capable of almost anything.”

The debut episode also served up a surprise twist that Angela (Tamara Taylor) is Richard’s ex-wife and seemingly still very involved in the crime ring, promising that these two will be welcome variations on the traditional one or two-episode antagonists.

“It’s a very complicated relationship,” McDermott says of the two former spouses. “Even though she’s his ex-wife, he relies on her. I think that he has never really let her go, so there’s some kind of love addiction with her. And she’s also complicit in it as well.”

The actor adds, “They need each other, whether they like it or not.”

When it comes to facing off with Elliot, McDermott says fans will not be disappointed. “This is a heavyweight match,” he says, noting that because he’s around for the foreseeable future, the dynamic between the two is far more complicated and complex than what Elliot’s faced before. “We’re going to see a relationship develop between them that is going to be explosive.”

He adds, “The show hinges on that, in many ways, to have a formidable, bad guy go up against Elliot because he’s such a well-loved character.” 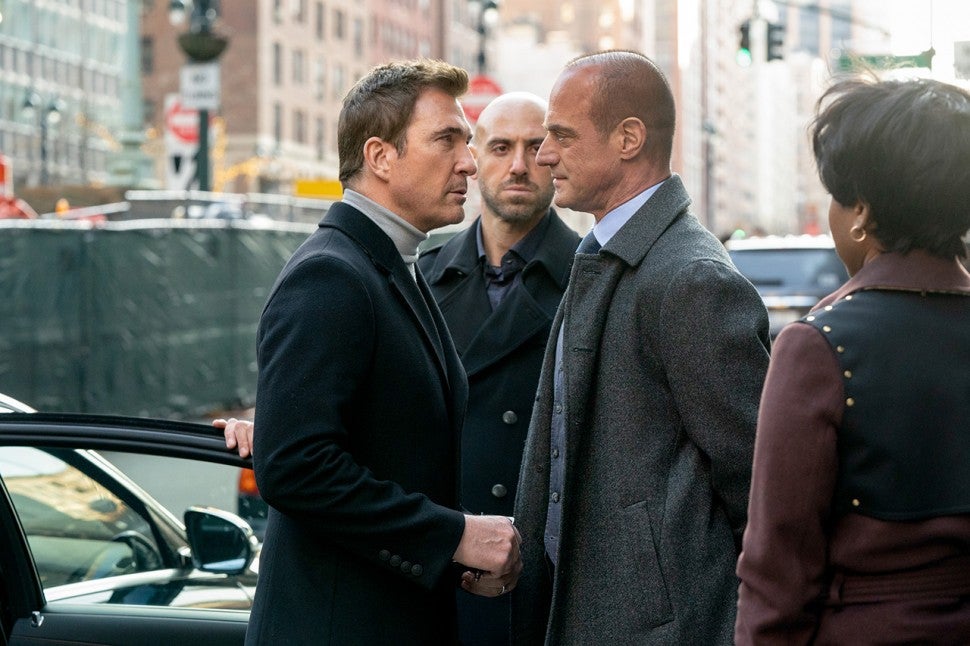 And McDermott knows a thing or two about being entrenched in such a character. At the start of his career, he broke out as Bobby Donnell on the legal drama The Practice, which ran for eight seasons. In the 15 years since, he switched up his image by partnering with Ryan Murphy on shows like American Horror Story, The Politician, and most recently as a gas station pimp in Hollywood, which earned him his second Emmy nomination.

Now he’s enjoying life as a more sinister presence on TV. “I started slipping into these roles a little bit more,” he says, adding that “this villain was interesting to me.”

And when it comes to those turtlenecks that are now part of Richard’s signature look? That was inspired by McDermott’s love for fashion. “When I was a kid, I would sell stolen Polo shirts on 14th Street,” he recalls, imagining someday he’d land on the cover of GQ magazine. (He eventually did by the way, in 1999.)

So when Organized Crime made its debut during the highly-anticipated Law & Order crossover event with Special Victims Unit, McDermott announced on Twitter: “The turtleneck is back!”

The Turtleneck is back! @lawandordertv#organizedcrimepic.twitter.com/MNOn3aW8Xz

As for what the future holds for Richard beyond the first eight episodes, McDermott says, “We’ll see what happens. But right now, I’m really enjoying these episodes that I’m doing and loving playing this character.”