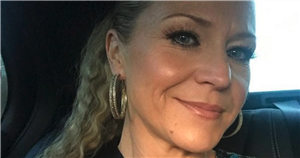 Kellie Bright has given her followers a glimpse inside her nursery after welcoming her third child with her husband Paul Stocker.

Sharing the happy news exclusively with OK!, the 45 year old told us: "We're thrilled to announce the safe arrival of the latest addition to our family. Mum and baby are doing well."

Ahead of her birth, the EastEnders actress, who also shares Freddy, nine, and Gene, four, with Paul, revealed the adorable little crib for her newborn to her 108,000 Instagram followers.

The grey and white crib was located near a set of brown drawers and white nightlight and right underneath a shelf full of toys such as building blocks and Russian dolls.

"Thank you @bababoomloughton and mumandme_app for my beautiful crip," the star, who is well known for her portrayal of Linda Carter on the popular soap, wrote in the caption.

Kellie revealed she was pregnant with her third child through frozen embryo insertion back In March.

In an interview with OK!, she previously warned that IVF isn't "magic" as she discussed her journey to getting pregnant with her third child with Paul.

When asked if she would have stopped trying for more children if Gene was conceived naturally, Kellie explained: "I think so, yes. But I knew when we had those frozen embryos, we had to give it a go. My friend said I'm a trailblazer! But I'm not.

"My risks would've been much higher if I'd had IVF from scratch now.

"I don't want women seeing people like me having babies in my forties and thinking, 'Oh, if they can do it, I have loads of time!' It might be OK… but it might not.

"I hate the term 'geriatric mother' for pregnancies over 35, but there's a reason for the label. I don't want to be seen as a woman with a magic womb."

Kellie had two embryos implanted before she fell pregnant with the third.

She revealed: "The first two embryos didn't work. So this baby inside me now was the last one we had – the last chance of a pregnancy, because at 44 we were not going through IVF again.

"I believe it was meant to be. But those three months, between September and November, were a real roller-coaster."

For more updates on Kellie Bright, sign up for OK!'s daily newsletter here.