Legendary rock star and guitarist Eddie Van Halen died on Tuesday after a lengthy battle with cancer. He was 65.

Eddie’s son and bandmate, Wolfgang — whom he shared with ex-wife Valerie Bertinelli — announced the news on social media.

“I can’t believe I’m having to write this, but my father, Edward Lodewijk Van Halen, has lost his long and arduous battle with cancer this morning,” he shared. “He was the best father I could ever ask for. Every moment I’ve shared with him on and off stage was a gift. My heart is broken and I don’t think I’ll ever fully recover from this loss. I love you so much, Pop.”

The news led to an outpouring of tributes to the Van Halen founder — who was widely regarded to be one of the greatest rock guitarists of all time.

Alex Van Halen, Eddie’s brother and another founder of Van Halen, shared a childhood photo of himself and his sibling with ET, writing, “Hey Ed. Love you. See you on the other side. Your brother, Al” 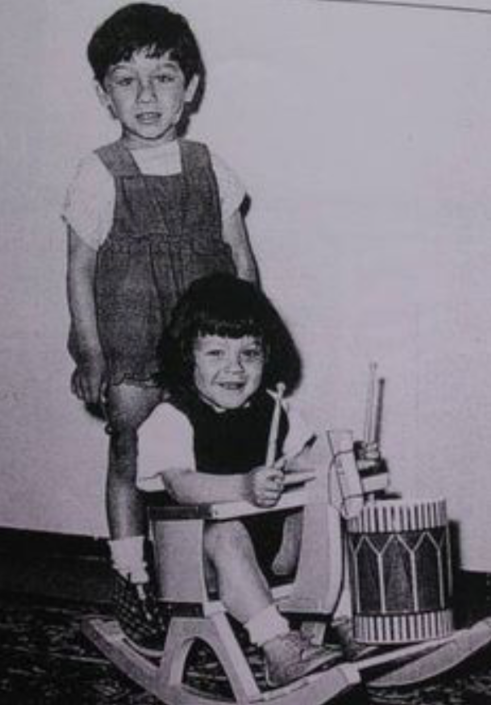 David Lee Roth also honored his Van Halen bandmate on Twitter with a throwback photo of the two of them backstage. “What a Long Great Trip It’s Been,” he wrote.

What a Long Great Trip It’s Been.. pic.twitter.com/M5pmkVi7hW

“Heartbroken and speechless,” Eddie’s other former bandmate, Sammy Hagar, also shared on social media. “My love to the family.”

Heartbroken and speechless. My love to the family. pic.twitter.com/MQMueMF2XO

On CBS This Morning, Jon Bon Jovi praised the rocker for what he brought to music. “Every teenager of my era couldn’t look at an electric guitar and not wish they could play like Eddie Van Halen,” he said. “He was an innovator of our generation, he will be remembered forever and sorely missed.”

Meanwhile, KISS frontman Gene Simmons wrote on Twitter, “My heart is broken. Eddie was not only a Guitar God, but a genuinely beautiful soul. Rest in peace, Eddie!”

My heart is broken. Eddie was not only a Guitar God, but a genuinely beautiful soul. Rest in peace, Eddie! …Eddie Van Halen Dead at 65 from Cancer https://t.co/gITtcndQVv

RIP to my friend and man who changed guitar playing forever …F?CK!!! no words

RIP to my friend and man who changed guitar playing forever …F?CK!!! no words

Crushed. So fucking crushed. RIP Eddie Van Halen. You changed our world. You were the Mozart of rock guitar. Travel safe rockstar.

“Eddie Van Halen and Neil Peart were just too good for 2020. We all are,” added Sebastian Bach. “My heart is broken.”

Eddie Van Halen and Neil Peart were just too good for 2020.
We all are
My heart is broken

E Roland, singer and guitarist of Collective Soul — who toured with Van Halen in 1995 — said in a statement, “As much of a talented monster he was on guitar, he also was one of the most kind, sweet and generous souls I’ve ever met. RIP Eddie.”

Harvey Mason Jr., Chair & Interim President/CEO of the Recording Academy also issued a statement, saying, “During his legendary career, GRAMMY Award winner Eddie Van Halen contributed to some of the world’s most iconic music. His explosive guitar playing and approach to the musical process solidified him as an undeniable force in his field and forever established his place as a true guitar hero. The world is lucky to have witnessed Eddie’s genius as a guitarist, and we know he will influence and shape rock music indefinitely.”

RIP to the GREAT @eddievanhalen. Even though it took a couple calls to convince U it was actually me on the phone 🙂 U killed it on Thriller, & your classic ?solo on Beat It will never be matched. I’ll always smile when I think of our time working together. Eternal ❤️ & props.

. @EddieVanHalen was one of the nicest guys I ever worked with and we shared so many laughs together.   His influence on music and especially the guitar has been immeasurable.  He was an absolute legend.  Eddie, I’ll see you on the other side, my friend.  Love, Ozzy.

Oh man, bless his beautiful creative heart. I love you Eddie Van Halen, an LA boy, a true rocker. I hope you jam with Jimi tonight. Break through to the other side my brother. ❤️❤️❤️ https://t.co/XpcTlPJq9A

I just heard about Eddie Van Halen and I feel terrible about it. Eddie was such a great guitarist and I remember how big Van Halen was, especially here in L.A. Love and Mercy to Eddie’s family & friends. pic.twitter.com/PY8fyrx1Lu

I am devastated at the news of the passing of my friend Eddie Van Halen. pic.twitter.com/hUyIdKXsdG

Eddie Van Halen and Neil Peart were just too good for 2020.
We all are
My heart is broken

Oh NO! Speechless. A trailblazer and someone who always gave everything to his music. A good soul. I remember first seeing him playing at the Starwood in 1976 and he WAS Eddie Van Halen. So shocked and sad. My condolences to Wolfie and the family. https://t.co/ExAWzFAEYJ

RIP Eddie Van Halen. Van Halen were a tremendous influence on both Vinnie & Dime & Pantera. Hopefully they are all rocking out together now! pic.twitter.com/XtnL33aGsd

“Sons Of Apollo are deeply devastated at the loss of a legend today, Eddie Van Halen. No one changed or influenced all of us more than Eddie in so many ways. He was what we and the world consider a game changer and will forever be remembered as the man who changed the face of guitar playing. Our condolences and wishes to his family. We are all a little part of this family in many ways. Thank you, Edward Lodewijk Van Halen. Saying you will forever be missed is an understatement!”

Two of the best hours of my life were spent chatting with Eddie Van Halen. A great musician, yes – also a funny and lovely guy who will be missed terribly. Sending love to Janie, Wolf, Alex & all those who loved him.

HE CHANGED THE COURSE OF GUITAR WHAMMY BAR ROCK & RHYME… A GAME CHANGER… AND HIS MELODIC CRAZY WAS OVER THE TOP… WE’LL MISS YOU EDDIE…
LOVE FROM ABOVE
ST pic.twitter.com/ByiJBk2KfR

RIP Edward Van Halen and the inimitable guitar sound of my youth. https://t.co/WHjqIajHxV

So sorry for your tragic loss @WolfVanHalen, but take solace in knowing that he will be long remembered and live on forever as one of Rock's most extraordinary guitar virtuosos. Condolences to you, Valerie @Wolfiesmom and the entire Van Halen family.#RIPEdwardhttps://t.co/XWoCe8nrZv

RIP A genius, musical change maker, one of the greatest to ever do it! ? Eddie Van Halen, legendary guitarist, dies of cancer at 65 https://t.co/U8TvDvZzIF via @USATODAY

The world lost an icon, innovator, showman, virtuoso, master songwriter and perhaps one of the biggest inspirations ever to learn how to play guitar. Heartbroken to hear of Eddie Van Halen’s passing. Our love, condolences and best wishes to his his family, friends and fans. #RIPpic.twitter.com/pGhPUXRzyb

God bless you #EdwardVanHalen, your work with @vanhalen and your music has done more to make the world a happier place than you’ll ever know. And one more thing….after taking #NeilPeart, @kobebryant and now #EVH from us, 2020, will you kindly just FUCK OFF already? pic.twitter.com/MJTOU19gKn

Rock and roll lost a great man today. Eddie Van Halen, your guitar was legendary, and your music will live on forever.

Eagles’ Joe Walsh also issued a statement on Tuesday, saying he is “deeply saddened by this news.”

“Eddie was a one of a kind guitarist and human being. He was a master at his craft, a peer I was in awe of and a friend I loved. I am deeply saddened by this news and Marjorie and I send his family our deepest condolences,” he said. “The world will be dimmer – and quieter – without him.”