EXCLUSIVE: Love Island’s Dom Lever reveals he’s had a hair transplant to restore his receding hairline – and the new dad says he ‘didn’t feel a thing’

He’s used to being in the public eye and looking his best.

And now Love Island star Dom Lever has ensured his locks are always camera ready by having a hair transplant at KSL Clinics to restore his receding hairline.

The new father, 28, was filmed during the procedure, which he said didn’t hurt at all, but did admit he ‘might be feeling it in the morning’. 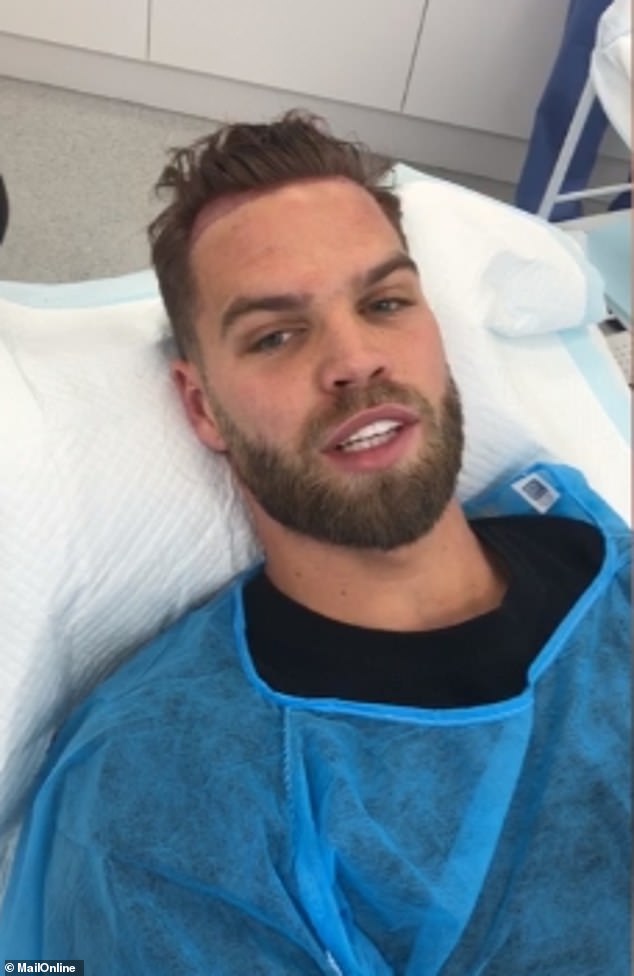 New look: Love Island star Dom Lever, 28, was filmed during his hair transplant at KSL Clinics and said that after other than the anesthetic going in, he ‘didn’t feel a single thing’

In a video shared with MailOnline, the reality TV star is seen laying on the treatment table for stage two of the procedure.

He explained how the doctor has just finished the ‘incisions’ and that so far it had all been almost pain free.

In the procedure, hair follicles are removed one by one from the donor area and then small incisions are made for the hair follicles to be placed on the new site.

Dom said: ‘Other than the anesthetic going in, I didn’t feel a single thing. Now it’s just putting them [the hairs] into the front of my head. I can’t wait to get finished really.’ 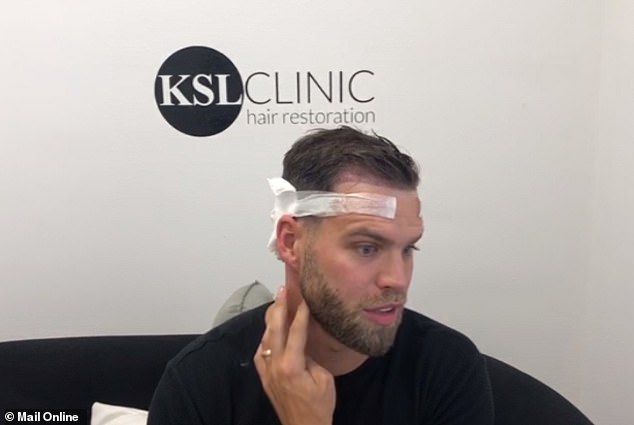 Post procedure: The new father showed off his look while having a bandage around his head 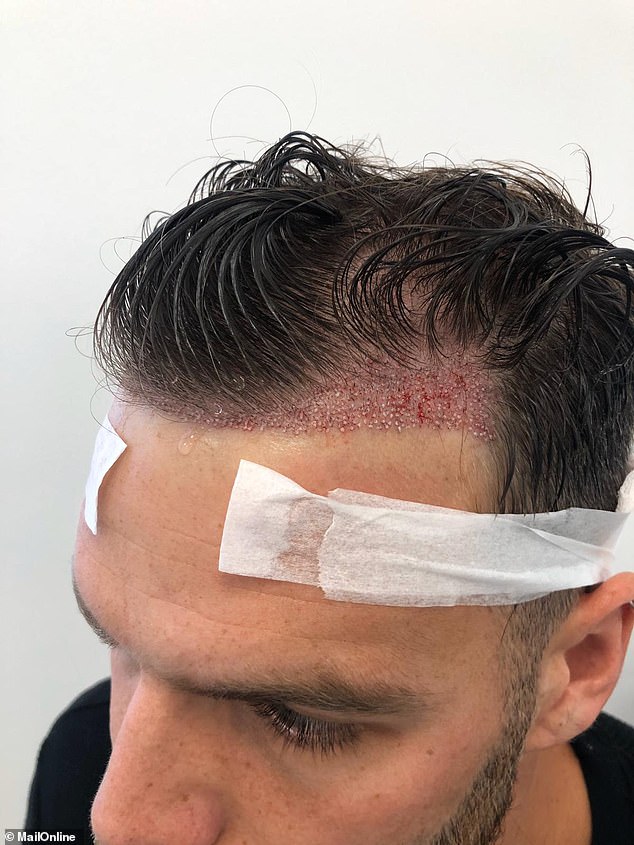 Done: Lots of tiny incisions were made on Dom’s hairline so hair follicles could be placed there

The father-of-one is then seen smiling after having the treatment and has a bandage wrapped around his head.

He said: ‘That’s me done for the day, had the hair transplant as you can see. It’s been amazing, literally took half the time I thought it would.

‘Everyone here’s been amazing, made me feel super welcome, and I literally didn’t feel a thing. 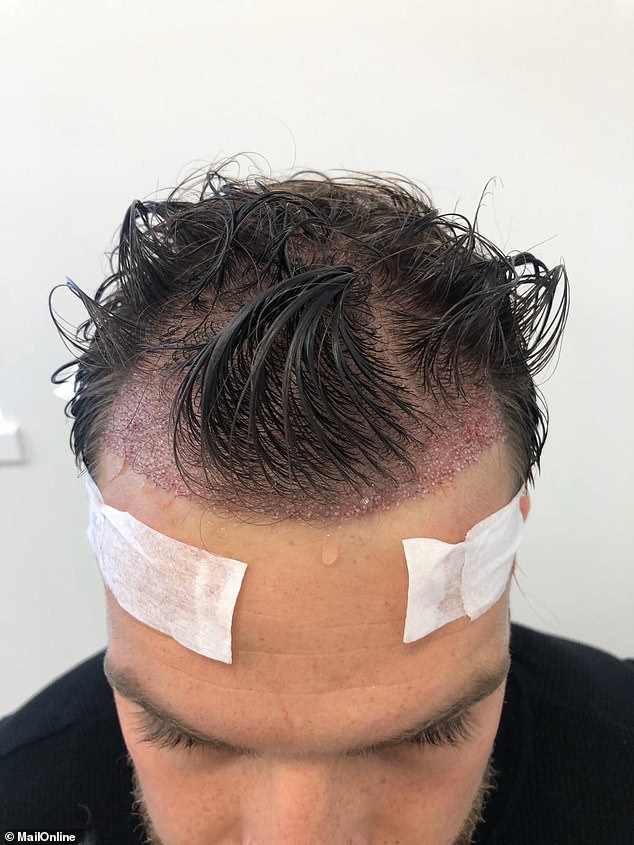 Pain free: Although having a red head after the hair transplant, Dom said it didn’t hurt at all

‘But I imagine I’m gonna feel it in the morning. It’s just about after care now and as you can see that’s my new hairline so thank you KSL.’

Speaking after his hair transplant, Dom had nothing but praise for the team at KSL, who have clinics in Kent and Manchester, who worked on him.

He said: ‘Everyone made me feel proper at home and secure, this place is amazing whole team are gents. 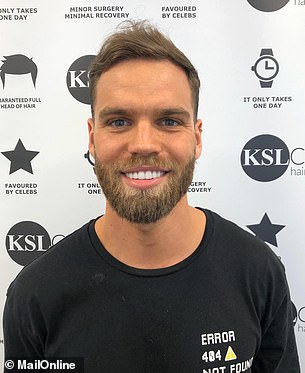 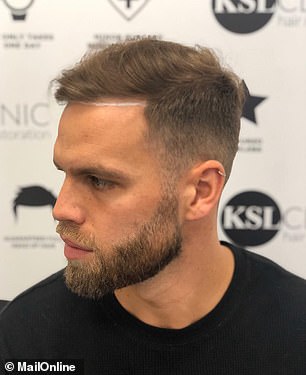 New look: Dom looked relaxed and excited as his hairline was marked out on his head in white 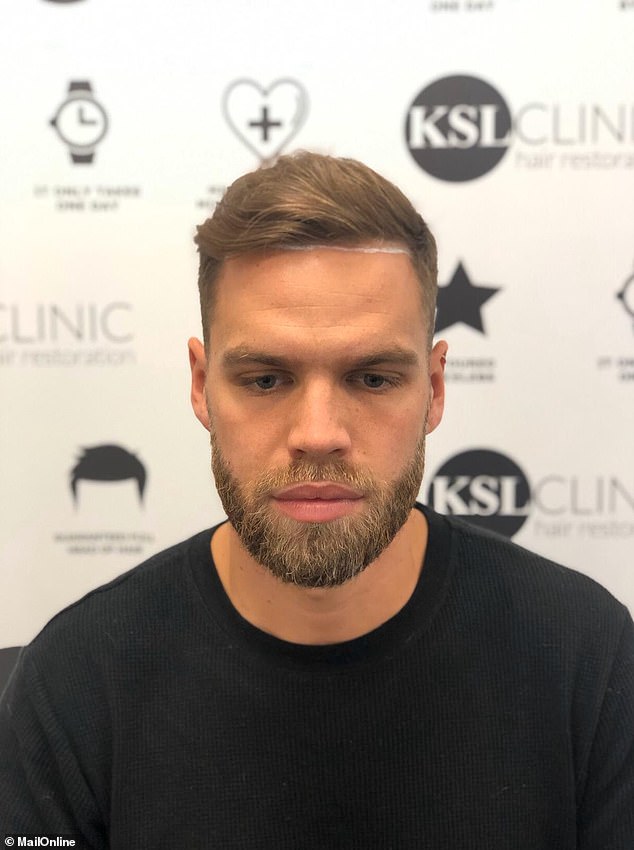 Big decision: Father-of-one Dom’s hairline was marked out with a white line by the doctors

‘Talking to the team [about getting the transplant], and I won’t say push me over the edge, but they gave me the nudge in the right direction.

Last Saturday Dom and his wife Jess Shears, 26, announced their first child together had arrived by both making a sweet post on Instagram. 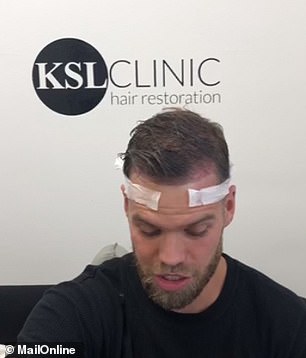 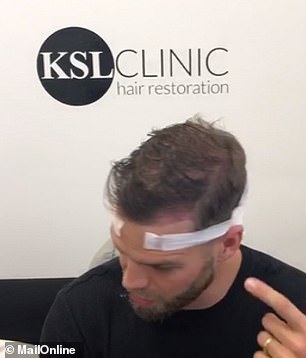 Recovery: Dom, pictured left and right after, had his transplant at KSL hair restoration who have clinics in Kent and Manchester 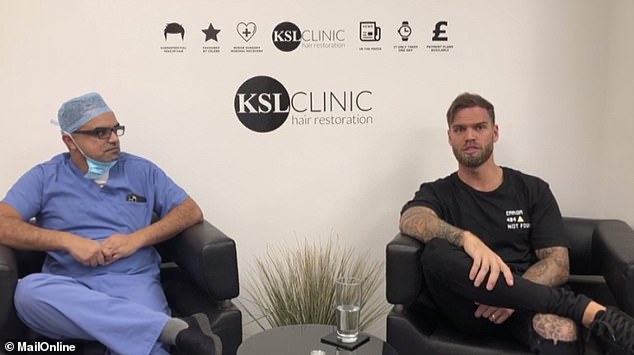 End result: Dom, pictured with one of the doctors, said ‘the whole team are gents’ and praised KSL for giving him an ‘amazing’ experience

Jess simply wrote ‘Baby Lever’ next to a photograph of her baby sleeping in a white baby-grow, while Dom posted a shot of himself walking away carrying their child in a car seat, which he captioned ‘baby we did it.’

The new mother also took to her Instagram stories to share Dom’s post, adding the heartwarming caption: ‘My whole world’ followed by a red heart emoji.

The happy couple have shared several updates about their newborn in the past few weeks, including a video of Jess breastfeeding in the car on Thursday. 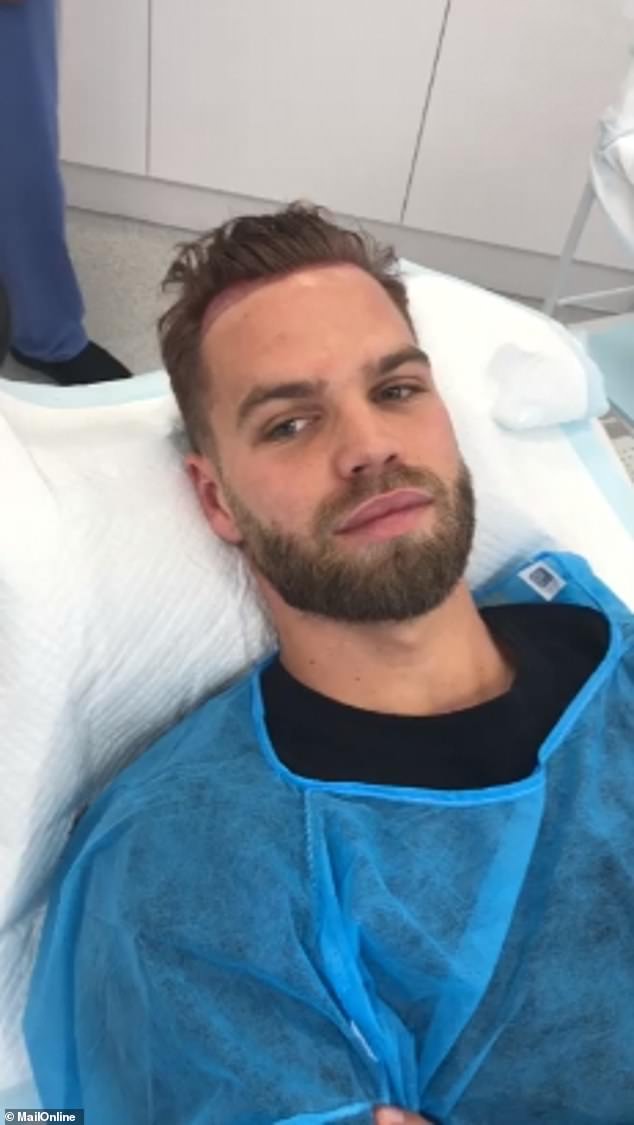 Stage two: Dom did admit that he felt the anesthetic going in before the hair transplant started

Dom said ‘there is nothing more real than stopping at a services to breastfeed’ before Jess did a thumbs up for the camera.

They also revealed they’ve hit the gym since welcoming the baby, whose name is not yet known, and had to slam trolls who slammed Jess for being back in the gym so soon after giving birth.

The beauty posted on Instagram after, saying: ‘Can people stop assuming they know anything about the birth of our child.

‘Just because we chose to share an image yesterday does not mean that’s when they ere born. Dom, baby and I are happy, healthy and recovering at our own rate.’ 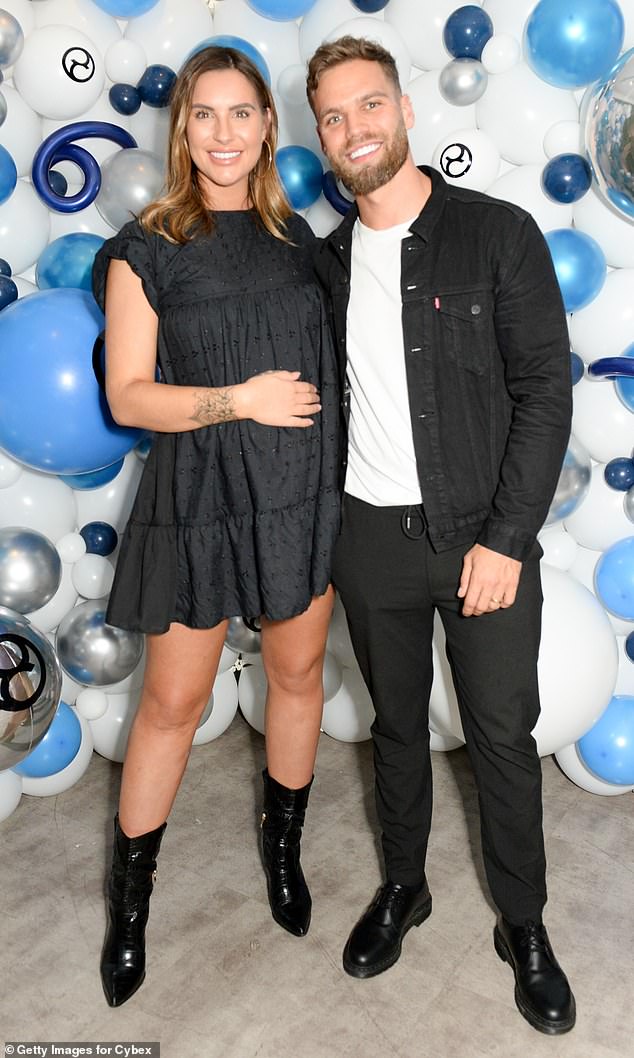 New parents: Dom and his wife Jess Shears, who he met on Love Island, announced they had welcomed their first baby together in October 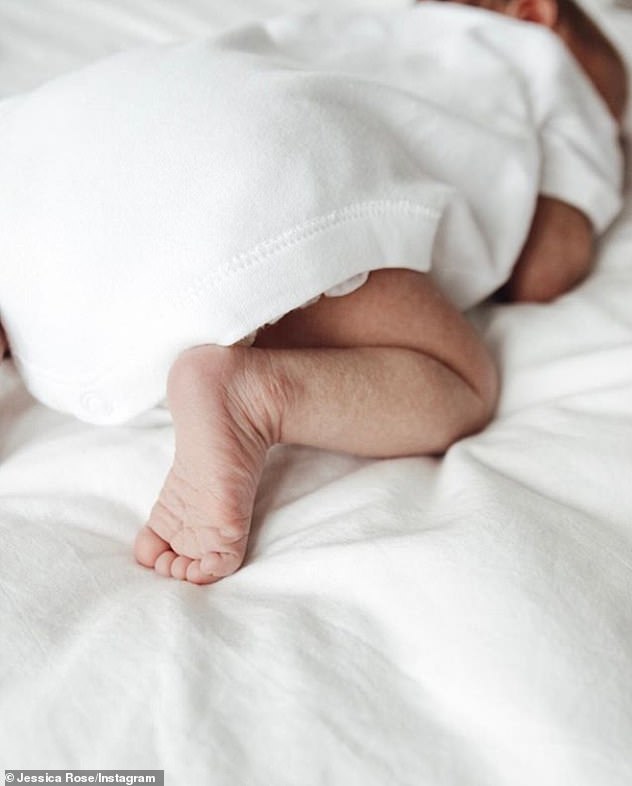 Baby Lever: The little one’s name and gender has not yet been announced by Jess or Dom

Jess and Dom announced that they were expecting their first child in May 2019, seven months after tying the knot.

The pair met on Love Island in 2017 and became the first contestants to have sex in the secret hideaway.

They became engaged after three months of dating and married in a romantic ceremony in the Greek Island of Mykonos in October 2018. 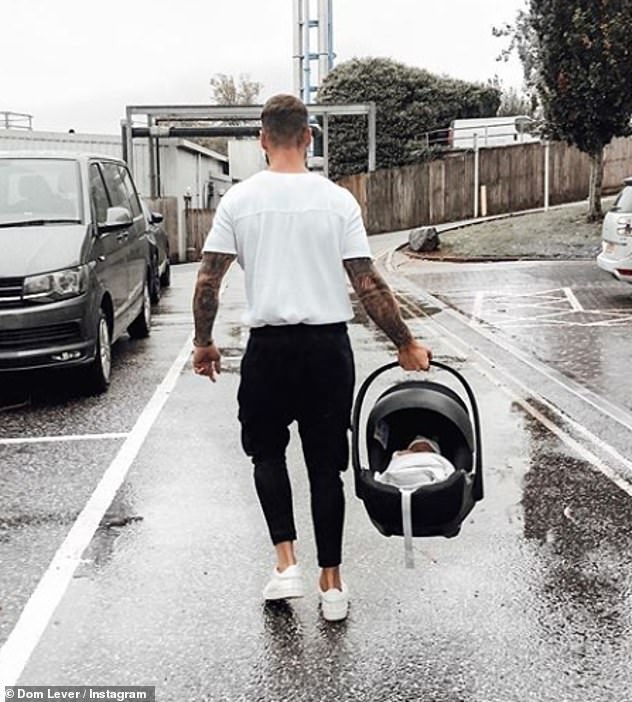 Proud dad: Dom posted a shot of himself walking away carrying their child in a car seat, which he captioned ‘baby we did it’ when he announced the arrival of his newborn