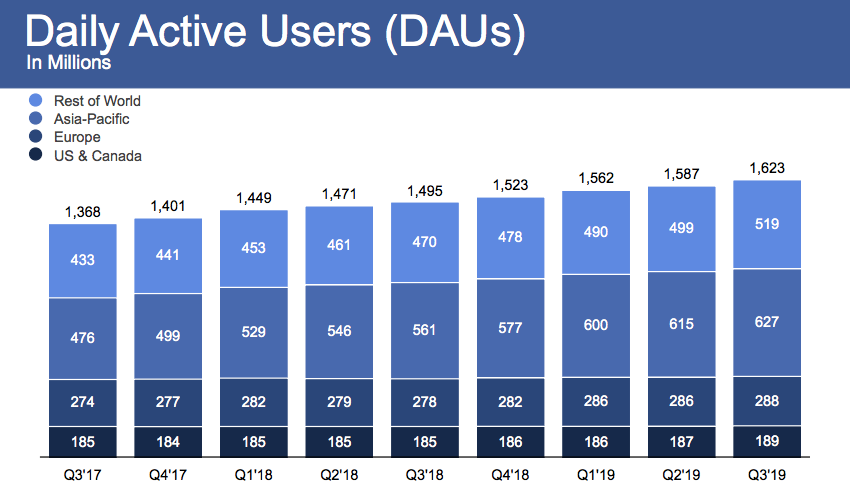 Stifel analyst John Egbert, in a note to clients this week, projected Facebook’s daily and monthly user count will both grow approximately 8% year-over-year, to 1.65 billion and 2.5 billion, respectively.

The other side to the coin for Facebook when it comes to users is how much time they’re spending on the platform.

The landscape for Facebook is different than a decade ago: It’s now competing against several streaming services, as well as growing competitors like TikTok, for how much attention they command. The longer it keeps users glued to its service, the more ads it can hit them with. And to keep viewers engaged, Facebook has debuted several new features in recent years. The results have been mixed.

Facebook Watch, its content hub, has produced shows with big-name celebrities like Tom Brady and Will Smith since launching two years ago, but it has largely failed to resonate with viewers. Last June, Facebook said 140 million users — or less than 10% of its daily users — watched at least 1 minute of its shows each day. It’ll be worth keeping an eye on whether Facebook  has been able to attract more daily viewers during its Q4 report.

Other features could prove more impactful. This time last year, Facebook reported 500 million people used its Stories feature on a daily basis — and analysts anticipate that figure has dramatically increased.

“We estimate the company reached 1.5B MAUs during [the fourth quarter], which is a milestone we think would be well received by the Street, particularly amid increased competition for younger users from Snap and TikTok,” Egbert said in his note.

Not only would Wall Street welcome this, but advertisers would, too. Facebook users have started to use the service less, according to some metrics; Earlier this month, Similar Web said Android users in the U.S. were using Facebook 52 minutes per day — down from the 58 minutes users were spending on it each day in April 2018. If Stories continues to grab new users, that figure should get a healthy boost.