They announced the arrival of their second daughter, Alayna, just last week.

And Faryal Makhdoom divided her fans on Thursday after she shared a post-baby body photo on her Instagram – seven days after giving birth to her second child with husband Amir Khan.

In the snap uploaded to her 860K followers, the mother-of-two looked stunning in a white embroidered and floral outfit with a matching scarf. 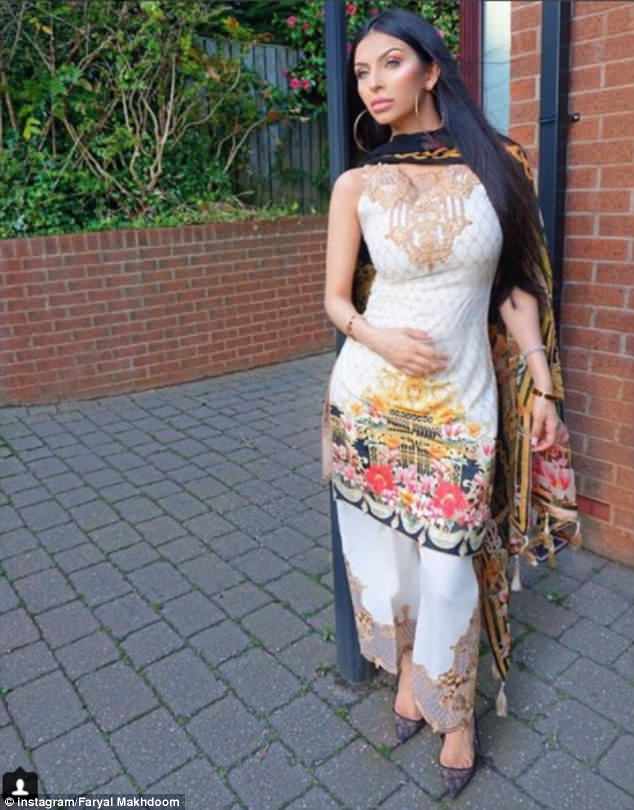 Dividing: Faryal Makhdoom divided her fans on Thursday after she shared a post-baby body photo on her Instagram – seven days after giving birth to her second child

Looking out into the distance, Faryal’s dark locks are styled into a sleek straightened hairdo as she wears a full face of glowing make-up.

The post inevitably divided fans, with some heaping compliments on the model, while others complained that it was ‘bragging’ and ‘pressurising’ new mums to lose their ‘baby weight’.

One person said: ‘You look gorgeous mama!’ followed by loved-eyed and heart emojis. 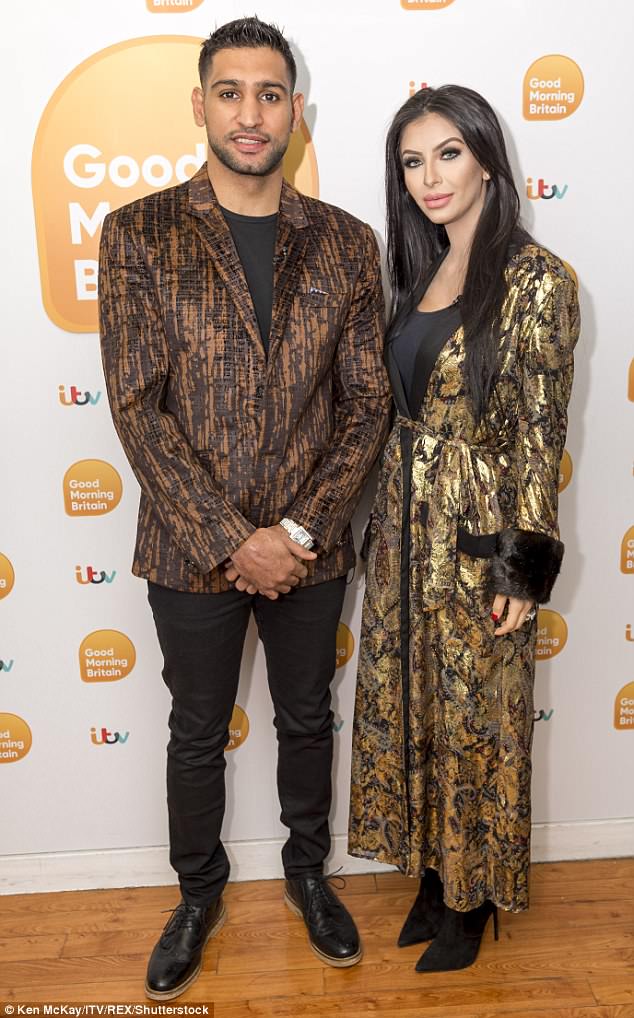 New parents: They announced the arrival of their daughter, Alayna , just last week – their second child together

Loyal fans: The post inevitably divided followers, with some heaping compliments on the mum

Not happy: While others complained that it was ‘bragging’ and ‘pressurising’ new mums to lose the ‘baby weight’

A different user put: ‘Very nice and congrats for your new baby.’

However, others were less charitable, with one follower saying: ‘Faryal looks amazing and hats off to her, but so many young girls look up to her who won’t lose there baby fat as fast as she did, I hope they do it sensibly.’ (sic)

A different follower put: ‘Be real.. u look fab.. but this is not the reality for most.. Plus women shouldn’t feel pressurised to be superslim immediately after giving birth.. Giving birth is a blessing and should embrace the process and their bodies – and lose weight as and when they are ready.’

While another fan commented: ‘Talk about fishing for compliments!’ with a different account adding: ‘Nothing like bragging.’

Defensive: In fact, these got so heated on the Instagram comments that one loyal fan stepped in to defend Faryal

In fact, these got so heated on the Instagram comments that one loyal fan stepped in to defend Faryal as they put: ‘Faryal didn’t ask for any of your negative comments she asked what you thought of her outfit. No need to be rude .

‘If you don’t like it don’t comment simple. She hasn’t done anything wrong. All she’s done is post a picture. I think she looks great after giving birth to her second child.’ (sic)

Just last week, Amir shared a picture of his daughter on Instagram with his 1.2million followers, writing: ‘With my new born ALAYNA KHAN. Welcome to the world. Weighing 8lbs 3oz.’

The on-off couple are already parents to three-year-old daughter Lamaisah.

Alayna’s birth comes after Amir made his return to the boxing ring on Saturday night which saw him knock out his opponent Phil Lo Greco in 40 seconds. 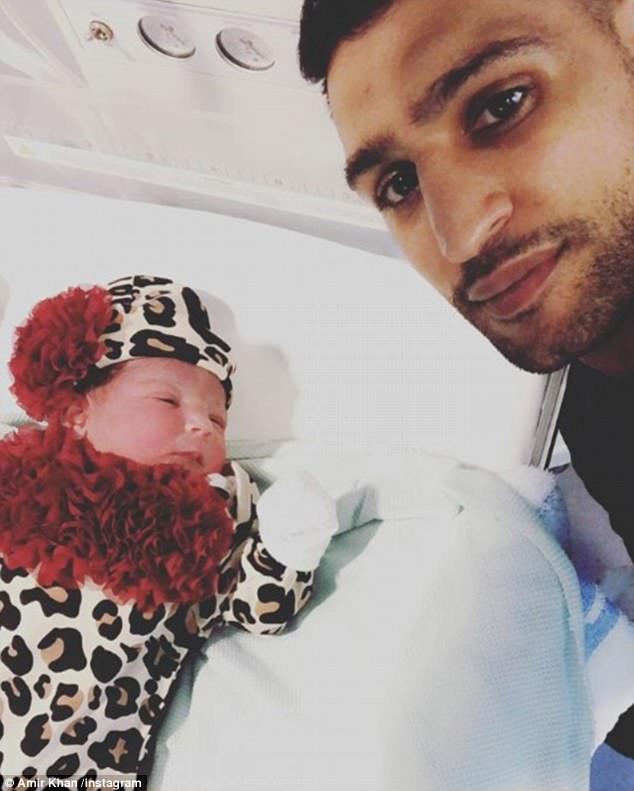 Happy: The couple announced the birth of their daughter last week, with Amir writing, ‘With my newborn ALAYNA KHAN. Welcome to the world. Weighing 8lbs 3oz’

Faryal, 26, and Amir have been together for six years and they tied the knot in a romantic ceremony in 2013 but their relationship has been marred by rumours of infidelity and they split last year, while Faryal was pregnant.

Khan, who is worth £23million, announced the couple’s separation in August in a tweet that read: ‘So me and the wife Faryal have agreed to split. I’m currently in Dubai. Wish her all the best’.

He said in a Snapchat video on September 8: ‘So me and Faryal are not together. I have filed for a divorce.

‘I hear she has just announced she is pregnant. She didn’t tell me. I had to read it on social media.’

During an appearance on Loose Women at the start of 2018 when the couple had resolved things, Amir said: ‘You want to change things at times, the way it went public wasn’t nice … anger sometimes takes over. That happened in 2017.

‘Hopefully going into 2018 we’ve both put that behind us, we’ve got a lovely baby coming this year, we have also have Lamaisah our daughter, my boxing career, [I will] get some good fights in. What went wrong? A lack of communication.’

Faryal added: ‘It was just a misunderstanding. I was in England he was in Dubai, he thought he was a bit cool in Dubai doing some tweets.’

Amir also admitted he hand found it tough being away from boxing with a hand injury, admitting he felt lost without the structure the sport has provided him since he was a boy. 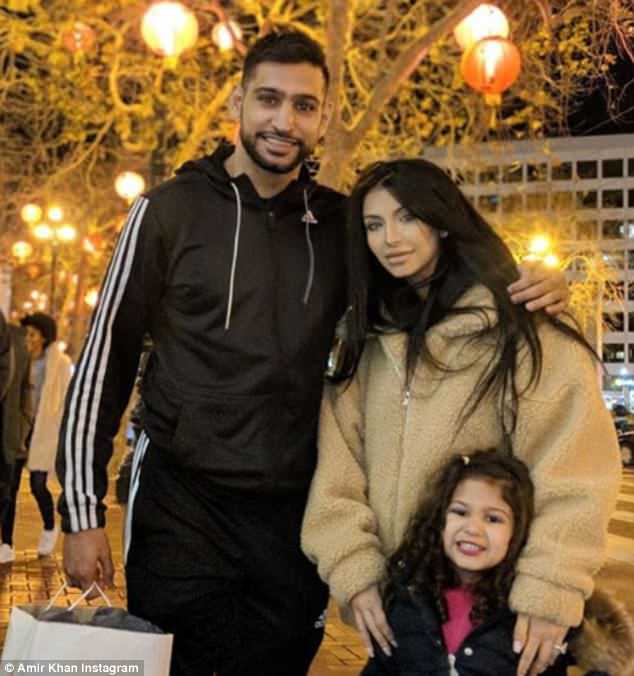 ‘My family were very supportive, my parents, they helped me when I said I don’t know what to do. 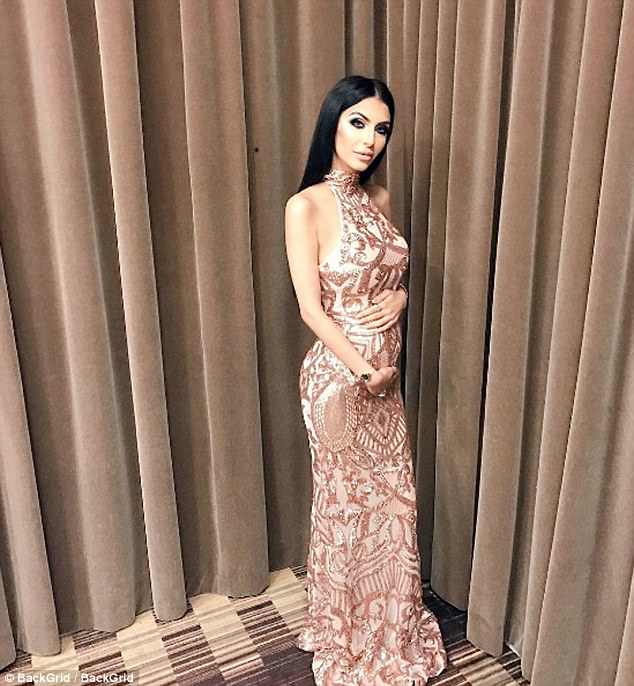 Throwback: Faryal shared this photo of herself when she was three months pregnant, a month before she reunited with her husband Amir following a time of acrimony

Back in February, Amir was hit by claims he begged a model to visit him at a San Francisco training camp while Faryal was in her native New York City after which she hinted she would be spending Valentine’s Day alone.

She penned in the caption: ‘How corny is Valentine’s Day… Who’s going to be sitting at home? Eating chocolates they bought themselves.’ (sic)

Faryal’s Instagram post came after Amir allegedly begged Dasha Abdelgany, 27, to visit him during his trip to San Francisco.

But they moved past the reports, with Faryal sharing a sweet image of on Twitter with the simple caption ‘Family’.

The baby announcement comes as Amir and Faryal previous woes had caught the eye of eager ITVBe bosses who have reportedly approached the pair for their very own fly-on-the-wall series. 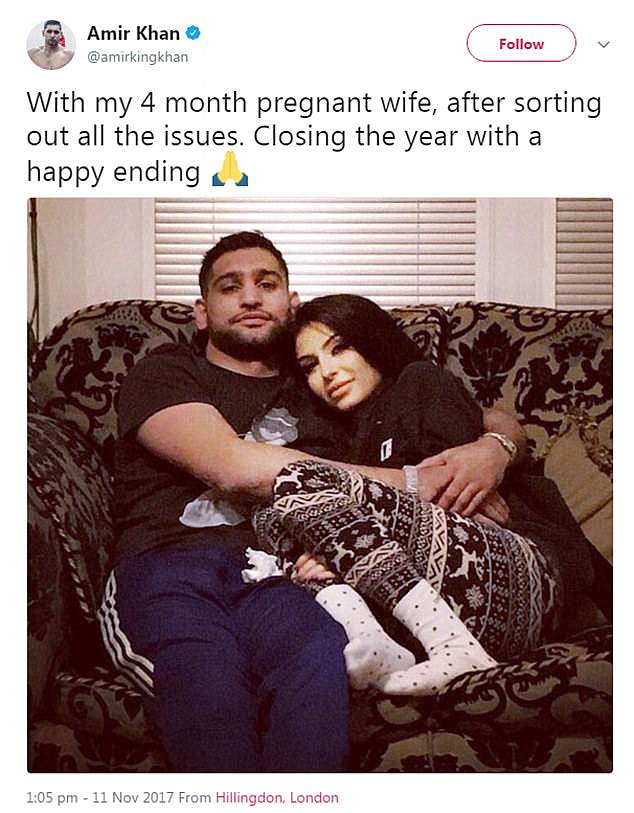 Back on:The champion boxer announced they had reunited by tweeting a picture of the couple snuggling in each other’s arms on the sofa in London back in November 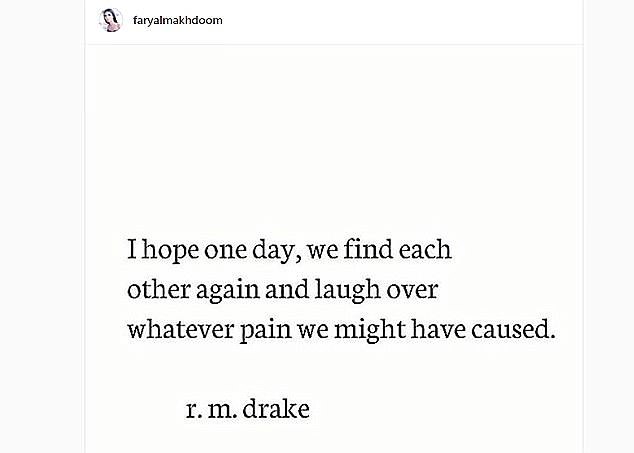 In a public war of words this summer both accused the other of cheating and Faryal accused Khan’s Pakistani parents of bullying her for not being a good Muslim.

Khan’s father Shah said she was ‘adopting a dress code which in the Islamic faith was not acceptable’.

Faryal also accused Khan’s sister of cropping her out of family photos.

Weeks later, Faryal revealed she was expecting their second child and they reunited two months after he filed for divorce, when she was four months pregnant.

The champion boxer then announced they had reunited by tweeting a picture of the couple snuggling in each other’s arms on the sofa in London back in November.

He captioned it: ‘With my 4 month pregnant wife, after sorting out all the issues. Closing the year with a happy ending’.

She wrote on Instagram: ‘I hope one day, we find each other again and laugh over whatever pain we might have caused.’

She shared a picture of her with Khan and their daughter and captioned it: ‘We’re going to be doing this all over again.’

The post came a day after pictures had emerged of Khan outside a shisha bar in London with Brazilian model Bella Gusmao before they jumped into a cab.

In October, Faryal posted a lengthy message on Twitter saying it was time for her and Khan to put their ‘differences behind us’.

She also apologised for all the ‘infighting’ between their parents, which she revealed has had a ‘terrible effect’ on her marriage.

She wrote to her 18,000 followers: ‘The past three months have been really tough on me and my marriage.

‘Matters haven’t been helped by the fact that my husband has been out of the ring for quite some time… it’s been very stressful for us as a couple, and a family.

‘I now recognise that all this infighting between me and my in-laws has had a terrible effect on my husband and I… and for that I would like to sincerely apologise.

‘My mother and father-in-law are the elders of our family and as such deserve love and respect just as much as my own parents do. I’ve said things in the past out of anger… I didn’t really mean and regret now.’

She added: ‘My daughter and unborn child do not deserve a broken home. That is why I have decided that it is time to put our differences behind us, and start afresh.

‘All families go through hard times. It is unfortunate for us that our difficulties were played out so publicly. I also apologise for my part in that.’

But Khan then publicly turned down her offer of reconciliation, confirming to fans their divorce would go ahead. Faryal then took down the plea for forgiveness.

Khan even accused his American wife of having an affair with heavyweight rival Anthony Joshua.

Khan hit out at his wife, writing: ‘Left my family and friends for this Faryal. I’m not hurt but another fighter. I’m making it public. You getting the divorce #Golddigger.’ 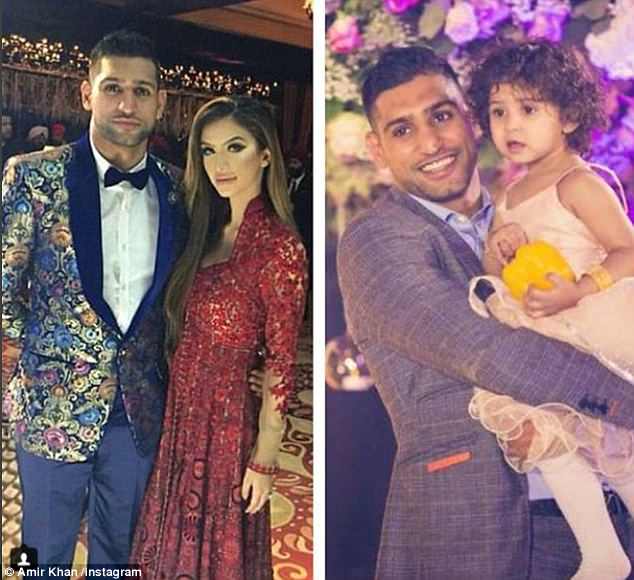 Gushing: Amir shared these images on Instagram on Valentine’s day, writing: ‘My queen and my princess’

But Faryal hit back minutes later, claiming her husband left his family because they had ‘robbed’ him and telling him to ‘stop making false things up’.

Branding him a ’30-year-old baby’, she went on to accuse him of sleeping with prostitutes and being a bad role model.

Joshua also laughed off Khan’s claims, posting the music video from pop star Shaggy’s It Wasn’t Me online, and saying he had never met Faryal.

Amir discussed what being a father means to him back in 2014.

He told Aquila Style: ‘Being a father is a fantastic feeling. I’m loving everything about it; it’s the start of a new journey for me.

And talking about his boxing career he said: ‘My family also keep my feet firmly on the ground and always show me moral support.

‘They’re always there for me no matter what happens; I’m grateful and blessed to have such a loving and caring family.’ 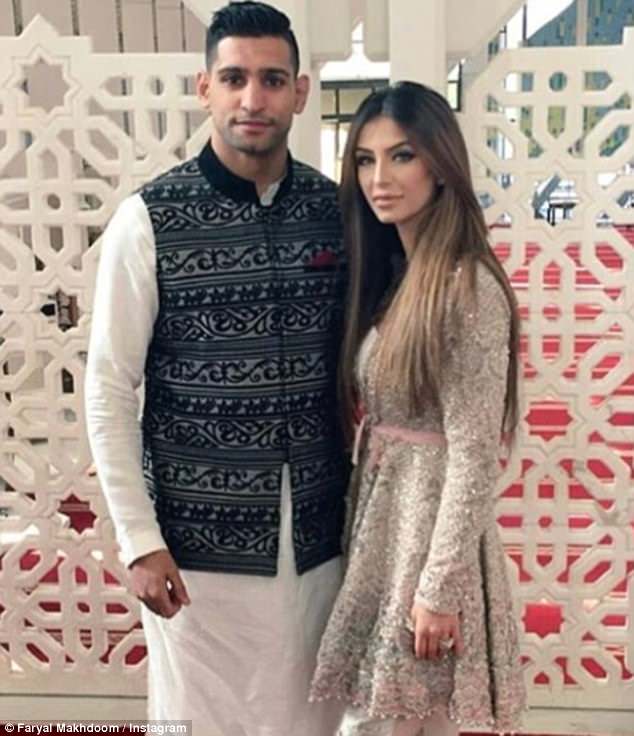 ‘Behind closed doors’: It’s said that the series will follow the pair, who wed in 2013, as they try to get their relationship back on track following their war of words and claims of infidelity