From recording studios to tanning beds, here are some of the wildest features in celebrity RVs 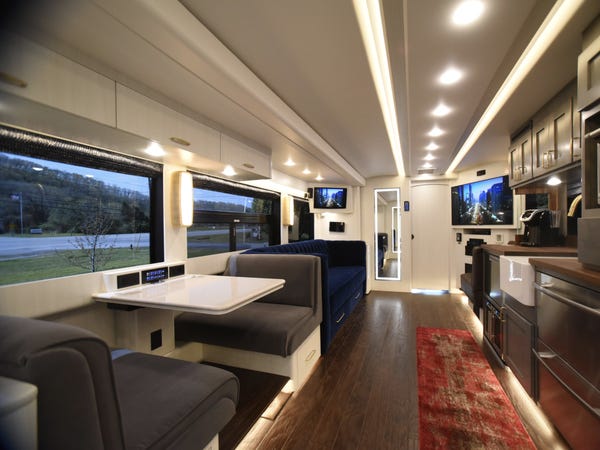 While people are turning to RVs in record-breaking numbers amid the coronavirus pandemic, celebrities have used giant motorhomes to get around the US for decades.

Hemphill Brothers, an RV company based in Nashville, has been building and renting RVs to celebrities like Taylor Swift, Beyoncé, Oprah, Dolly Parton, and the like for 40 years.

Although the company keeps most of the celebrity names and the exact details of their RVs private, these $2 million motorhomes are fully customizable, housing state-of-the-art technology, full kitchens, and luxury bedrooms.

Take a look at some of the best features included in these celebrity RVs.

The living spaces of Hemphill Brothers' RVs are designed to feel like a luxury home, but they are also completely customizable. 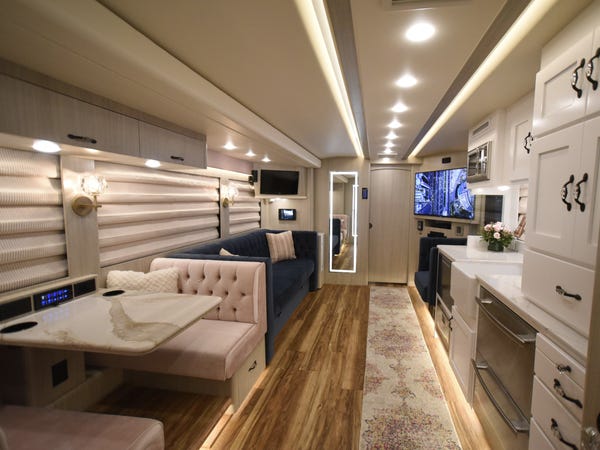 On a bus for Taylor Swift, for example, Hemphill Brothers said they added a trophy case and a treadmill. 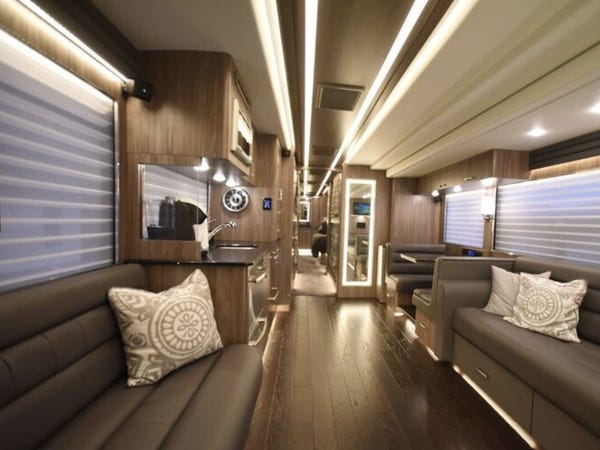 The Hemphill brothers said they built a special case for Swift's RV (not pictured) so she could display one of her awards.

"My tour bus is really important because I live there. I'm there more than when I'm home," Swift told Just Jared in 2008. "So, I put a fireplace on my tour bus and a flip-down treadmill and a really comfortable bed. I feel like I'm home whenever I'm on my tour bus. I do not regret that splurge."

There is a large master bedroom at the back of each RV. One celebrity wanted the space turned into a classroom for their children. 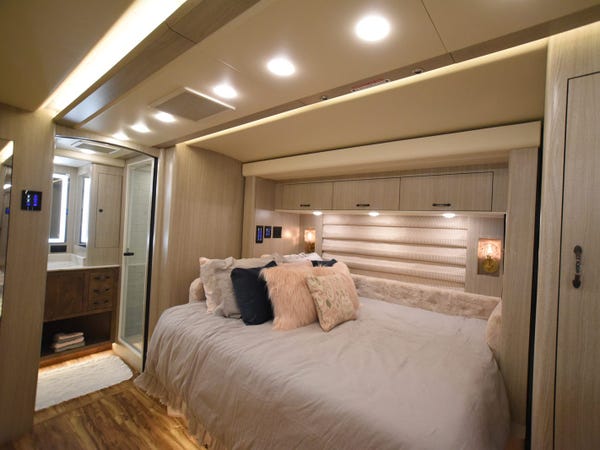 Other stars redesigned their master bedroom to fit a large dog crate under the bed.

Each bus is outfitted with bunk beds so the celebrity can easily travel with their entourage. 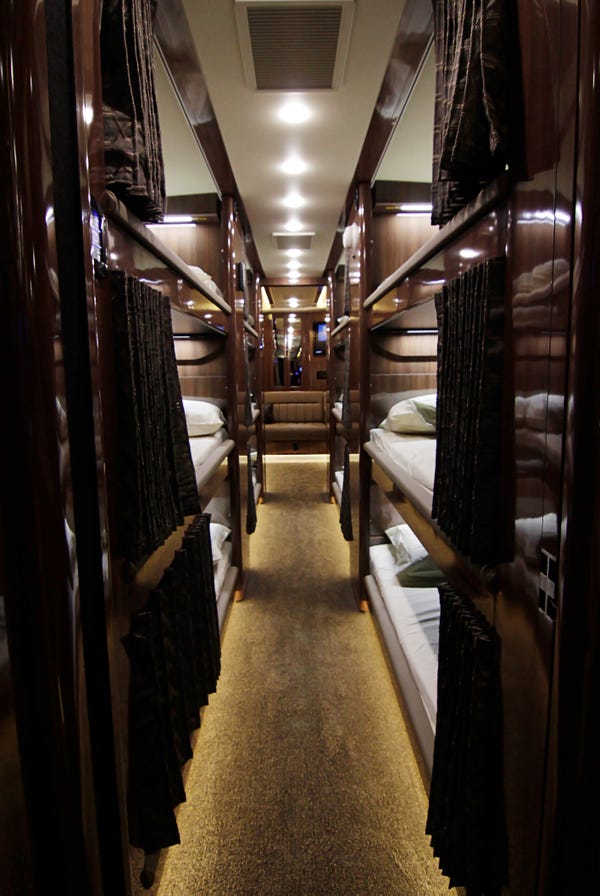 "These bunks really set us apart from the motorhome industry," Trent Hemphill, co-owner of the company, told Insider. "When a star is traveling, they can ride in the rear and they could have their security, their chef, or their personal assistant all riding in the same vehicle."

The company even personalizes bunks upon request, like this Marvel-themed bed. 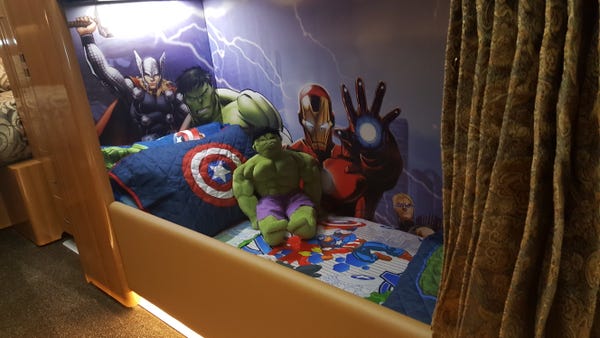 Each bunk bed has its own TV. 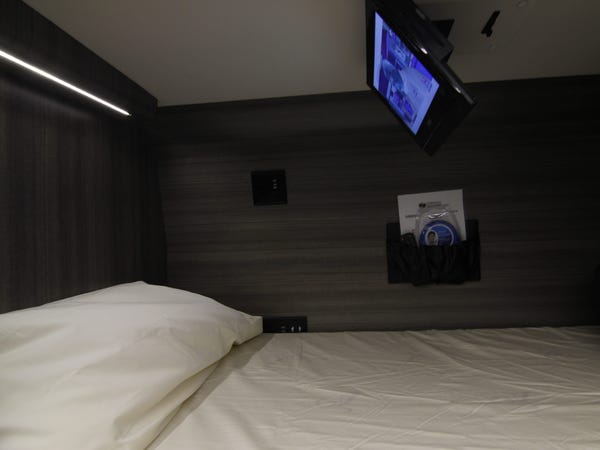 In all, the celebrity RVs can sleep eight people.

The kitchens are fully equipped so professional chefs can prepare meals while stars are on the road. 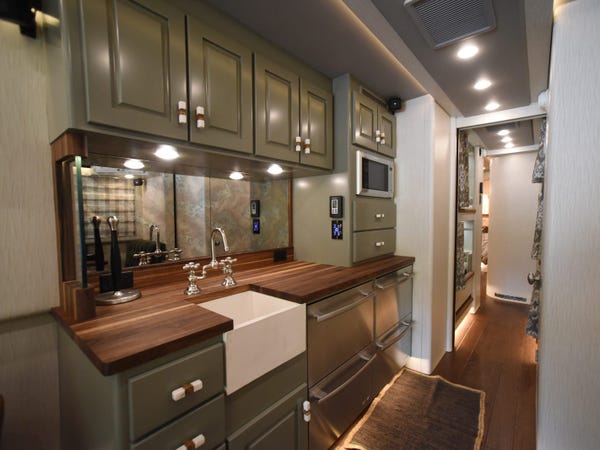 In the kitchen — typically referred to as the galley — there's a stovetop, microwave, and refrigerator.

The bathrooms feel more like a luxury hotel than an RV. 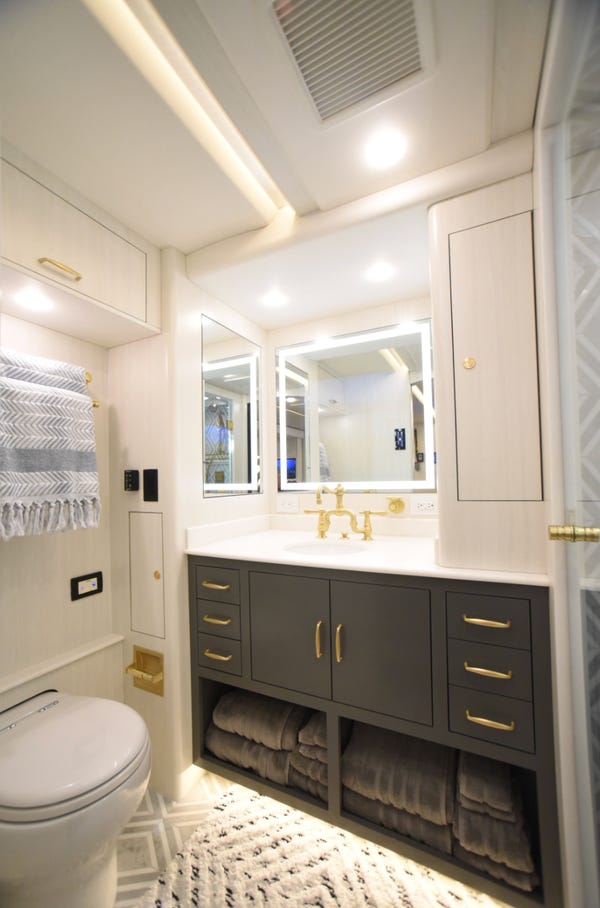 Traditional motorhomes have one bathroom, but these RVs have 1.5 bathrooms. The bathrooms have toilets, sinks, and standing showers, which have benches to sit on while bathing.

Other celebrities have requested electric fireplaces and tanning beds, all of which Hemphill Brothers have provided. 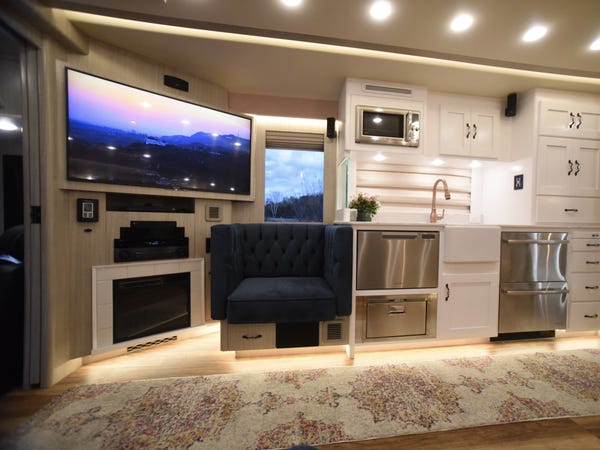 Joey and Trent said more celebrities are requesting fireplaces in their RVs these days.

"You never know what the next person is going to ask for, but that is what makes building a bus so much fun," Joey Hemphill, co-owner of Hemphill Brothers, said on the company's website. "No two buses are alike and there is always going to be new challenges around the corner."

This RV was outfitted with a recording studio in the back lounge because The Band Perry wanted to make music while on the road. 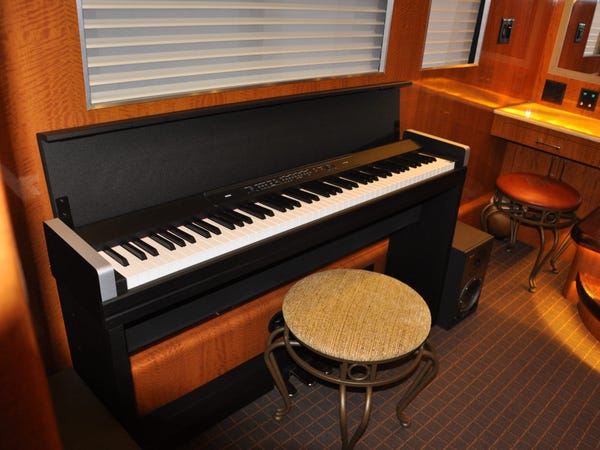 Celebrity RVs can be completely customized based on wants and needs.

The entire RV can be controlled by a tablet on the wall. 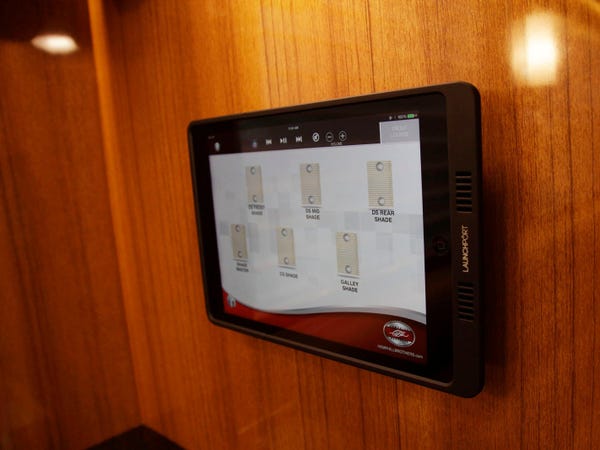 The doors, windows, and pop-outs can all be controlled electronically.

There is also WiFi and satellite TV, both of which can be accessed outside the home. 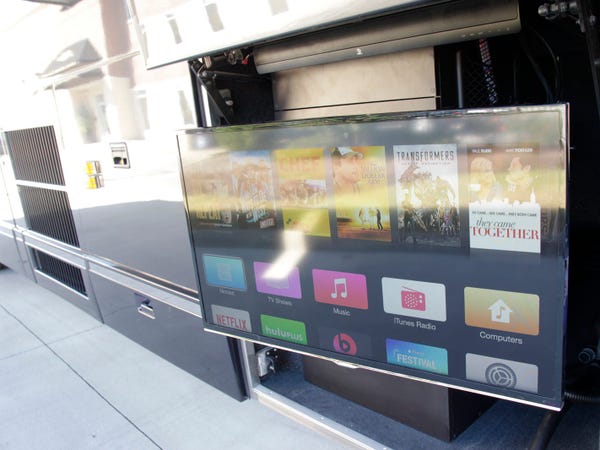 "If you want to sit and watch TV in the Grand Canyon, we can do that," Joey said.

Some of the RVs are now available for members of the public to rent.