For many, the festive holiday season may include overdoing rich and heavy foods and sweets. Food Network host Giada De Laurentiis is a big believer in rebooting the body after such times. Here’s her Detox Soup to start the new year right.

De Laurentiis is a big believer in reboot mini-cleanses

In her 2021 book, Eat Better, Feel Better, the chef opened up about her habit of working light “reboots” into her diet throughout each year.

“You know how you can be working on your computer and everything seems to be operating at half speed—or even comes to a complete standstill?,” the Everyday Italian star wrote. “Sometimes the only way to get things up and running again is to reboot the whole system. Well, your digestion is not all that different. When that happens to me, either because I’ve been too careless about what I’m eating or traveling a lot and eating on an unpredictable schedule, I use a quick reboot plan to get everything back on track.”

Noting that during her reboots she eats mostly vegetables, “some lean protein,” and even fewer fruits and grains, De Laurentiis finds that these breaks from heavy eating are “a great way to kick-start your transition to a new, healthier way of eating.” 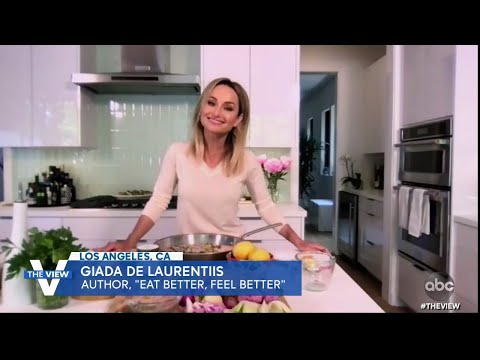 The chicken, lemongrass, ginger, carrot, celery, and shallot are all diced or sliced and added to a soup pot along with the bay leaf, peppercorns, chile, and a teaspoon of salt. About six cups of cold water are added and the soup is brought to a simmer and then cooked for nearly an hour, or until the chicken is thoroughly cooked. (The lemongrass, the chef says in the Food Network recipe, “adds a subtle citrusy flavor to this soup.” The stalks need to be smashed in order for the lemongrass’ oils to be released.)

De Laurentiis notes at this point, the soup is cooled off for about half an hour. The chicken is removed from the stock, shredded, returned to the pot along with the baby spinach, and ready to serve. 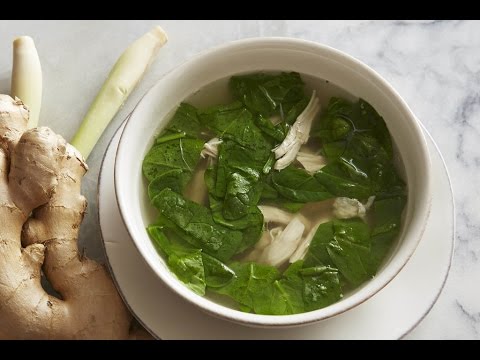 “I have made this soup half a dozen times and am simply in love!,” one reviewer wrote. Another said it was “perfect after a weekend of overindulging.”

Other home cooks added that the soup is their new go-to when they’re not feeling well. Or, when they just need a comforting dish.

“It’s so yummy to sip on! I now always have a mason jar in my fridge ready to go for a quick pick me up, or when I am feeling stuffy!,” said one reviewer, while another said, “The soup is light but very satisfying at the same time. Perfect for the first cold night of the season.”