Hulu’s M.O.D.O.K. dropped all ten episodes of its Season 1 at once. The stop-motion animation delivers enough hilarious moments that you’ll be done before you know it, and asking when more of the big-headed villain’s antics are on the way.

Patton Oswalt stars in an adult comedy about Marvel’s M.O.D.O.K. (which stands for Mental Organism Designed Only for Killing), a villain who has as much trouble keeping his family together as he does destroying the world. In amusing fail after fail, M.O.D.O.K.’s wife files for divorce and he loses control of his company. By the season finale, the show takes a dark turn as M.O.D.O.K. decides to let his entire family die in order to achieve world domination. He quickly realizes none of his triumphs are worth it without his family at his side, and vows to get them back. 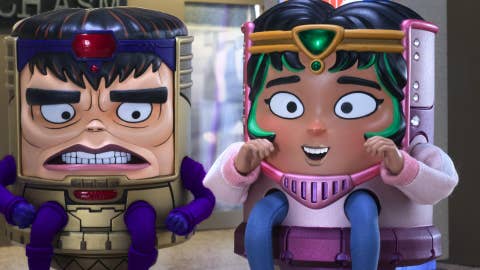 As of now, a second season has yet to be confirmed. However, the production team has already made plans for the next season, including character arcs. Co-creator Jordan Blum replied to a tweet about Melissa, M.O.D.O.K.’s teenage daughter, and her sexuality. “Season 1 focuses mostly on her relationship with her dad but season 2 will introduce her girlfriend,” Blum says.

In another tweet, a user asks if that means a second season is confirmed. “Not yet,” Blum says. “Just need enough people to watch.”